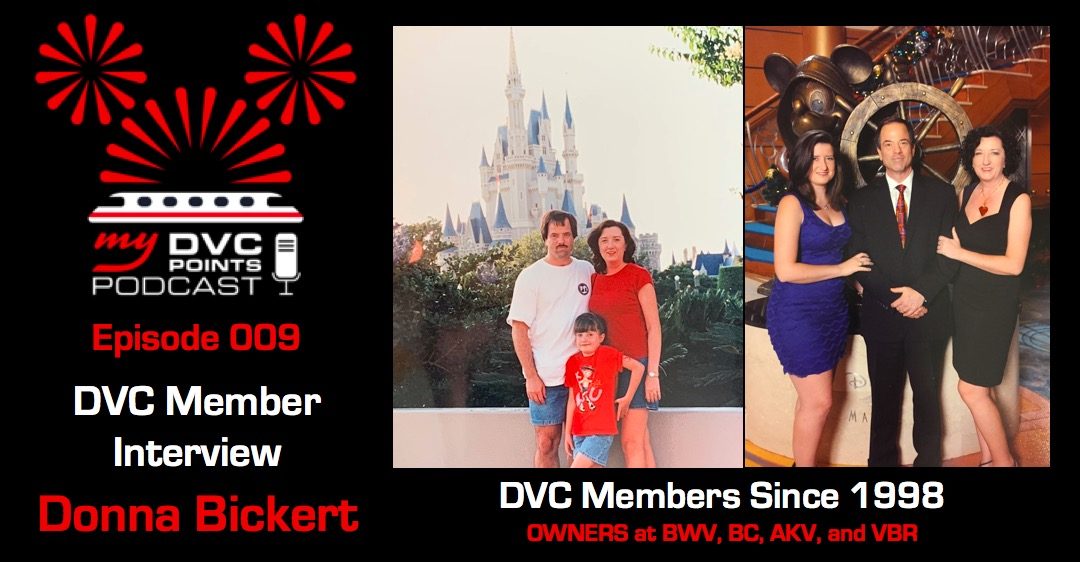 In this episode, we're talking with Donna Bickert, a 20-year Disney Vacation Club veteran.  She joined in summer of 1998 as an original owner at Boardwalk Villas.  Donna explains she bought into the resort sight unseen. When her family wanted to become members, DVC had already sold all of the points for Old Key West. They decided to buy Boardwalk sight unseen while the property was in pre-sales and pending approval for sale to Texas residents. BW, BC, Animal Kingdom, and Vero. Same use year so that it’s easy to combine at the 7-month window. 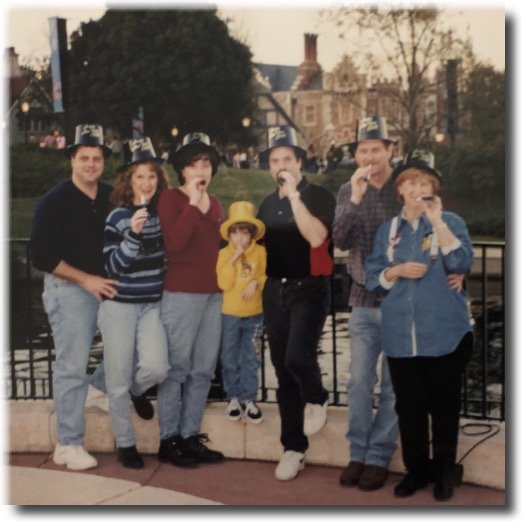 Donna's first trip home as a DVC member after joining in 1998.

Donna loves the Italy pavilion and Tutto Gusto Wine Cellar. Her daughter grew up as a DVC kid with wonderful childhood memories coming to Disney every year. Donna explained pre-show that her daughter fell in love with the turtles at Vero Beach and a Disney cast member sparked a lifelong interest in animal conservation.  Her daughter is currently a cast member in Disney's Animal Kingdom specializing in animal education for guests.

She bought Boardwalk simply because it was the only thing available when the family decided to buy into DVC. By the time the family started suffering from “addonitis,” Boardwalk had sold out.  Disney was actively selling Beach Club Villas, so they added on more points across the lake. After a few trips to Vero, Donna's family fell in love with Vero Beach Resort and decided to buy Vero points for the 11-month window. Her family loves the three bedroom cottages overlooking the ocean.

Donna and I discuss combining Vero Beach stays with Disney Cruise Line. She highly recommends Vero after a DCL cruise so that you can adjust back to normal life after being relaxing days at sea. I joked that you need time to wean yourself off the pixie dust high from DCL.  Pixie dust withdrawal is real. 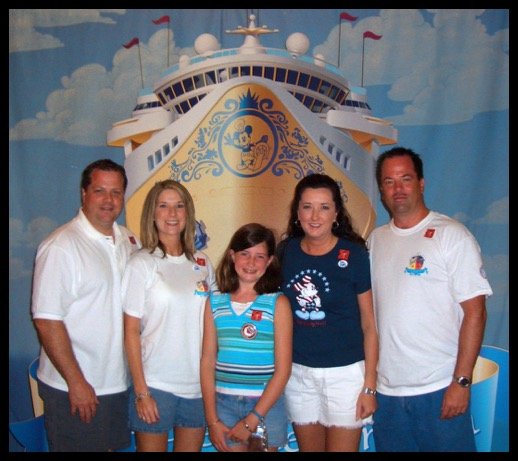 As Donna mentioned in the show, she loves going to Disney with extended family and has become a Disney Cruise Line expert.

Donna’s family is also DVC members. Shortly after Donna became a member, her sister and her mother also bought into Boardwalk Villas. Because all three families own Boardwalk, they're able to book grand family gatherings at the 11-month window at the same resort.

Donna and I shared a rant about friends and family members who somewhat want to come with us and cannot commit in the 11-month window. They want to stay with us at the hard to get resorts like Beach Club or Boardwalk, but we have to have early commitments.

Donna’s favorite resort is her first love – Boardwalk Villas. Donna misses the hidden Mickeys, large vanities, and the entire resort had “more fun” decorations. Mickey was riding a roller coaster. Donna's theorizes that the gentleman who designed the bathroom was a single bald guy. He had no hair, no wife and no daughters because there is no place for toiletries in the shower or the bathtub. We discuss how DVC members do not like the refurbishments. It’s our home and sets up a classic “Who Moved My Cheese?” moment. We agreed that Beach Club décor is slightly better than Boardwalk. However, Donna still loves the layout of Boardwalk. Donna’s best experience with the DVC waitlist was a last minute trip during Food and Wine. She cobbled together a split stay across multiple resorts. Ten days before check-in a waitlist came through at Bay Lake Tower. She’s had numerous waitlists that just never came through during the holidays. 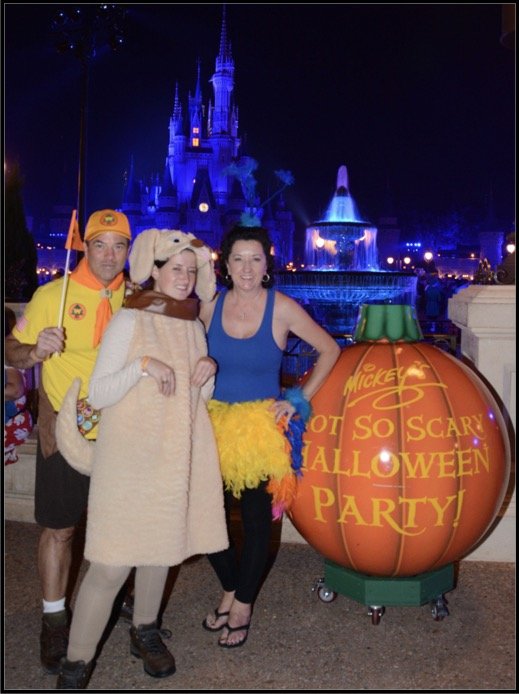 Adventure is Out There! These explorers have found a magical adventure!

Excellent Advice on Christmas Season and Disney Trips:  Donna also buys the platinum level passes because they go to Disney at Christmas to be with her daughter. Cast members have to work the holidays so that we can go on vacation. Therefore, Donna goes to see her for the holidays. Donna gave some solid advice on going to the parks between Christmas and New Year’s Eve. Embrace the crowds but go in with a clear touring plan. Make sure you have your fast passes booked and advance dining reservations lined up. Accept the fact that you’re not going to ride Space Mountain 30 times during the holidays. Donna highly recommends seeing the special fireworks shows on December 30th and 31st from the Magic Kingdom because of the 360-degree fireworks. Epcot has two sets of fireworks on New Year’s Eve. They countdown NYE at every country around world showcase and mini-firework shows, then run an Illuminations show and then a special firework show. 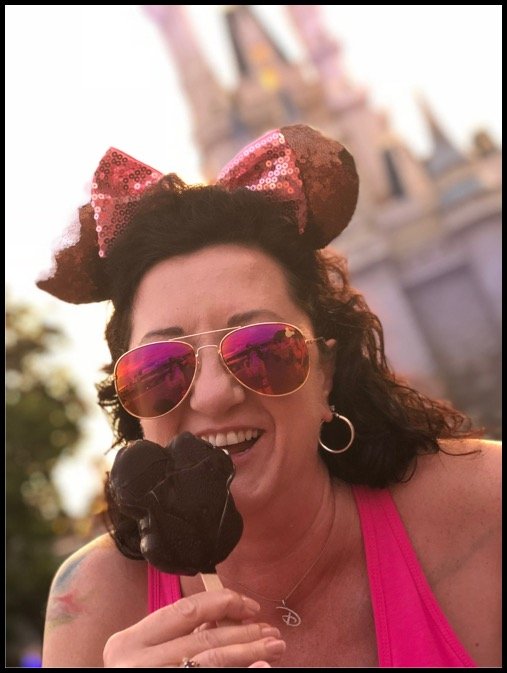 Incredible picture. These pixels pack in the pixie dust!

Other family traditions:  Her family does hit every park on a trip. They bounce in and out of the parks a lot. They love riding Prince Charming Carrousel. They don’t have non-park days. They end up in the parks every single day. They love rope dropping the water parks. Just before 2-3pm, they’re tired of going to the water park, clean up and go to a park for dinner.

Given 20 years into DVC, if you could do something different on your contracts, what would you change? Donna would have liked for her whole family to have a massive pool of points. They transfer points and end up making reservations for each other a lot.  (If you don't already know, moving points from contract to contract or member to member is time consuming, requires calling member services, and transferred points do not show up online.  You have to call member services to book a reservation with transferred points).

If Tinker Bell gave you 2000 one-time use points, with guaranteed availability, what would you do? Donna would book a two-week vacation at Aulani for her entire extended family. If she had any leftover points, she would do an Adventures by Disney trip to Italy or Switzerland with her sister. 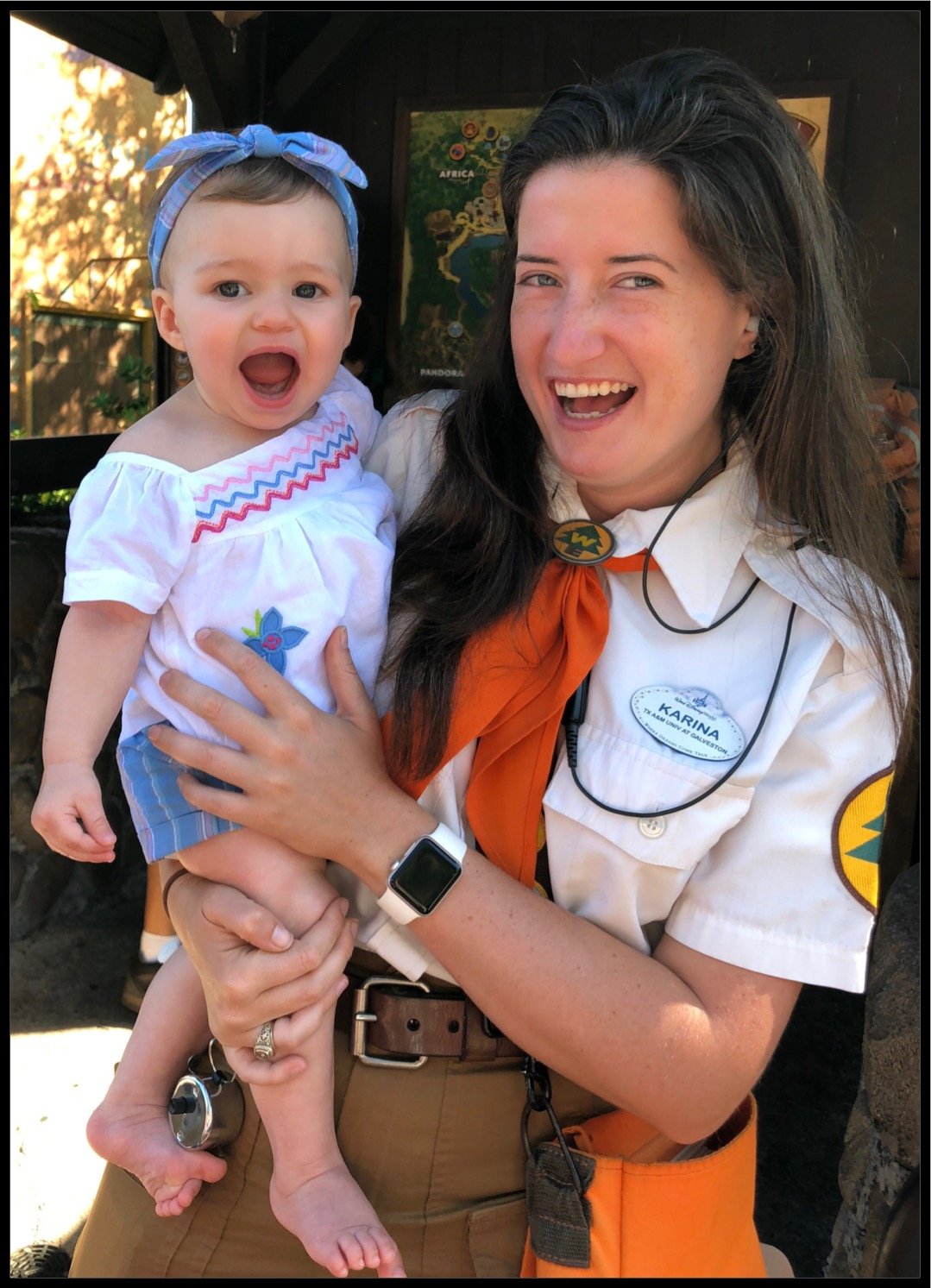 Karina grew up as a DVC kid and now helps other families create magical memories.

To connect with Donna, you can reach her in the My DVC Points Community Facebook group or join her group:  Disney Vacation Club Community Hall. After years of DVC ownership, Donna became a travel agent with Hi Ho Vacations to share her Disney knowledge with others. As a Disney Authorized Earmarked Vacation Planner, Donna specializes in Disney Cruise Line. She loves helping DVC member with things that are not the best use of our points such as Disney Cruises and Adventures by Disney. You can reach her at Donna @ HiHovacations.com.

Donna provided all of the photos for this post.  Special thanks to John for being such a great sport!  We need to get John on a future show to hear Dad's side of the story. 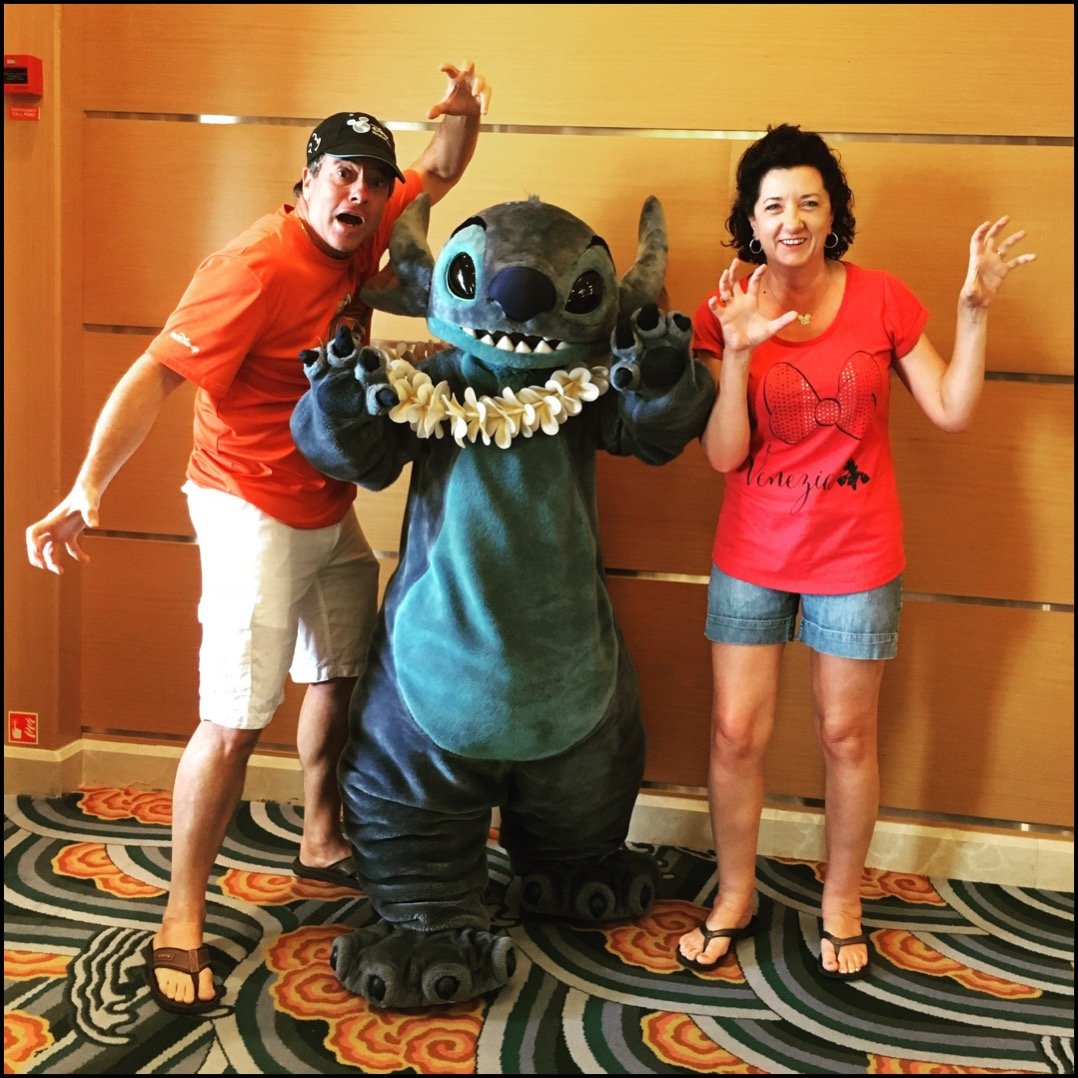 John knows how to have fun!  I have faith that the members of Donna's Facebook group will get him on an upcoming show.