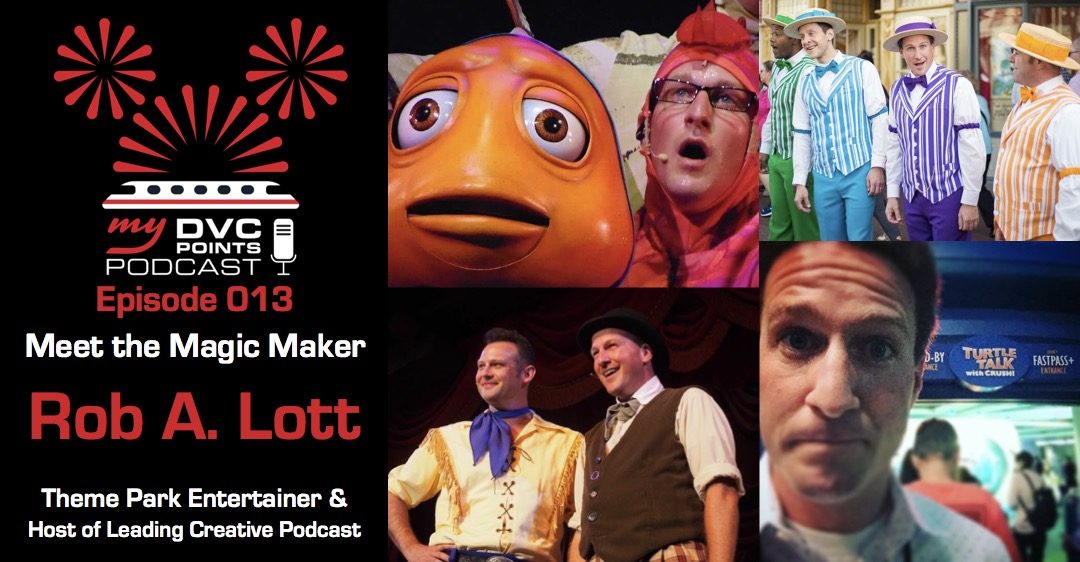 Episode 013 is the first interview in our “Meet the Magic Maker” series.  As DVC based interview-based podcast, we normally ask member's to share their stories and their personal opinions.  However, there are countless unsung heroes behind scenes and some on center stage who also have a unique and interesting perspective they can share.  Disney calls these people cast members, I call them the magic makers.

In today's episode, we meet Rob A. Lott, an 18 year veteran at WDW entertainment and ask him to share his story and his personal experiences.  As you'll hear in this interview, Rob did a fantastic job of sticking within some guidelines: 1) we're all about individual stories.  We want to know your story.  2) Share enough to build anticipation and whet our appetites for our next visit home, but don't spoil the magic.

Rob’s journey began with the dream of wanting to work in show business.  From an early age, Rob always knew he wanted to be a performer and work on stage.  As you will see and hear, Rob’s undeniable talent along with hard work and a touch of Disney magic is the basis for his entire career.  He landed his first position at Disney World as a puppeteer at the Legend of The Lion King.

Shortly after that, Rob along with a few friends were looking for a change, so they auditioned for a barbershop quartet “gig” as The Dockside Porters at Tokyo DisneySea.  After making the final cut, they performed in Tokyo for thirteen months.

Upon returning to Walt Disney World, Rob moved from the performing side to production.  Rob started working behind the scenes include Finding Nemo The Musical. Rob certainly enjoyed the production aspects. However, he missed being on stage.

To use some Disney insider terms, Rob became “friends with Crush.” Rob shares a story about two attractions that opened at the same time and all the media attention was on Turtle Talk with Crush. (This is a must do Disney attraction if you have small children in your party).  Rob tells a heartwarming story about a little boy who told Crush he didn't have any friends. (You'll have to listen to see how Crush responds).   We both got choked up during the story.  This story is pure Disney magic and makes the episode!

Rob explains the fascinating backstory of the show as well as the relationships of characters, as well as the individual dynamics. Rob provided pro-tips as well as great advice and suggestions on booking the show categories.  We were able to find his performances on YouTube.

You can reach Rob on Instagram, Twitter or Facebook.  If you aspire to any form or leadership, I highly recommend listening to his podcast “The Leading Creative Podcast” by Rob A. Lott.  (Spoiler Alert – The leadership principles Rob covers apply everybody.  However, I do learn a lot about live stage production by listening to his show).

Episode 013 was made possible by TheThing.Live

Meet Terry Weaver from episode 002, Rob A. Lott from episode 013, McNair Wilson from a soon-to-be-released episode, Chad Pennycuf and numerous other at The Thing event in Orlando May 15th to 19th.  If you would like to attend the conference, feel free to use our coupon code “mydvcpoints.”  (This is not an affiliate code.  We asked for the best discount possible for our listeners).  TheThing.Live