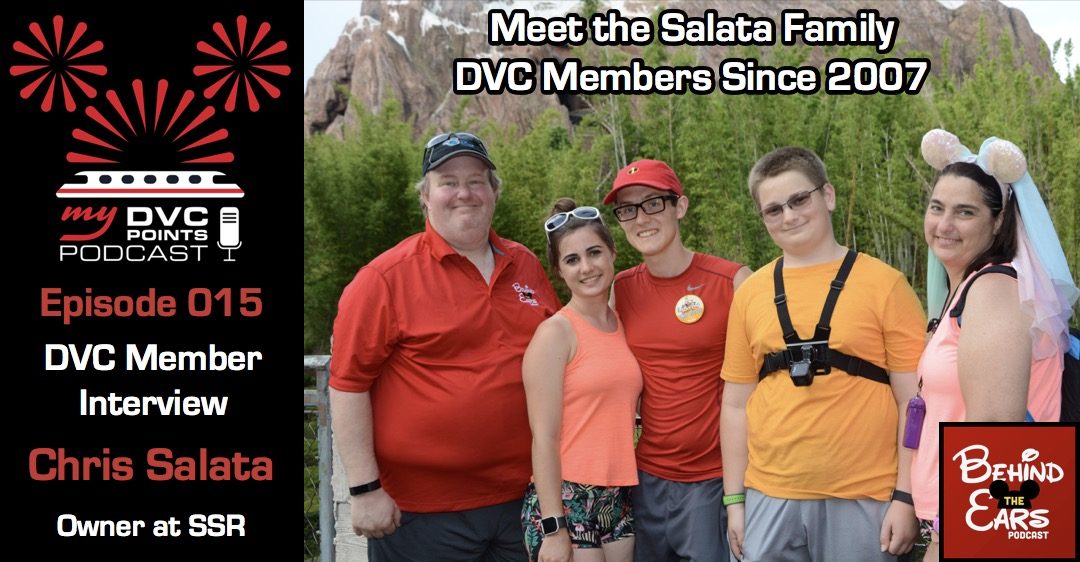 I had the pleasure of meeting Chris Salata from Behind the Ears Podcast at a fundraiser supporting Give Kids the World Village at the Disney Indy meetup in 2017. Behind the Ears is an podcast. Chris and I have a common theme in our podcasts in that we focus on how everybody does Disney differently. His show focuses on the general Disney experience while I specialize in DVC members experiences.

The Salata family joined DVC in 2007 when they became owners at SSR. Salata family has four members. Chris, his wife, Cathy, and two children. His daughter is currently in grad school, and his son is in high school. His children were thirteen and three at the time. Chris provided numerous pictures, and we grouped them by year so that you can follow along as the Salata children grew up in a Disney Vacation Club family.

Chris has 20 years’ experience as a Walt Disney World visitor but only 11 years as DVC members. It took Chris 9 years to buy into DVC. They wanted to get jobs settled, get the family home established and generally to the place where the “investment” in vacations made sense. The family had started staying at two deluxe resorts: the Wilderness Lodge and Animal Kingdom Jambo House. When Chris began to run the math on Disney's deluxe resorts, with a little extra budgeting, DVC made perfect sense. Chris figured out that mortgage payments on DVC were only slightly higher than what the family was already budgeting for deluxe accommodations. Chris bought into DVC in the final phases. Chris provides photos from his first trip home as DVC members that show Animal Kingdom Kidani Village and Bay Lake Tower under construction.

When the Salata family bought in his son was just over three years old, and his daughter was in her early teenage years. (Chris supplied a lot of pictures to show how his family grew up as DVC members. You can follow the first trip to their most recent trip in the photos below.) Chris points out that the latest visit was 2018 and his daughter brought “the son-in-law candidate.” (As a father of two daughters, I appreciate the humor here). The family is just now getting to the point where graduate school demands may prevent his daughter from joining on next DVC vacation.

Much like many Saratoga owners, Chris purchased Saratoga for economic reasons. After the first year, the family spent 6-7 years trying out other resorts. They've tended to stay at Animal Kingdom Lodge the most. (Chris also points out his favorite resort is the Animal Kingdom Kidani Village.) However, in the last few years, Chris has been staying in the preferred areas of Saratoga Springs. They love rooms in Congress Park and looking across the lake at Disney Springs.

The Salata family prefers one bedroom villas; however, they've been staying in studios to stretch points and have an extended vacation. Chris explains that when they first joined DVC, they thought it was strange to do laundry on vacation. However, after having access to laundry facilities, they wouldn't consider a trip without the use of the facilities. Access to laundry machines allows them to pack fewer clothes, always have clean clothes and not have to return home from vacation with a ton of laundry.

The family either stops at a mega-mart or have groceries delivered to the villa and makes excellent use of the kitchen. They primarily cook breakfast items as they enjoy all the Disney dining on vacation. Chris also speaks as highly of the full-size refrigerator because it allows the family to load up bottled water, gallons of green tea or his wife's favorite, a case of diet soda. Having plenty of beverages readily available also helps the family stay hydrated in the Florida heat.

Generally speaking, the Salata touring plan involves plenty of resort time. The family likes experiencing the parks in the morning and returning to the resort in the afternoon for pool time. Evenings may be a dinner, a night show or back to the theme parks. Chris and his daughter have a unique tradition called “Garbage Can Photography” where they take photos within the parks at night after closing time using a mini-tripod that sits usually rests on the flat top of a Disney garbage can. The tripod allows for extended exposure photos. This tradition has become a cherished father-daughter bonding time. Chris considers getting a dole whip and Mickey premium bar more of a habit. Another family tradition is to get a PhotoPass picture of the family waving goodbye to the castle on their last day in the park. On their last day of vacation, you will usually find them at Disney Springs visiting the Lego store, World of Disney and having dinner at Olivia's at Old Key West.

Chris confesses on the show that he's turned in his man card. He is a raving fan of the Senses Spa at Saratoga Springs. He's done individual spa treatments, but he highly recommends the couples massages. Chris didn't entirely sell me on the idea of a couple's massage; however, I did purchase my wife an hour massage. Chris also pointed out, Senses Spa often has discounts and bonus treatments for blue-card DVC members who are eligible for Membership Extras. Chris also points out that the spa at Saratoga Springs has larger square footage, offers more options and is generally considered the better of the two by most Disney spa customers.

The Salata's usually drives to Walt Disney World. This facilitates grocery stops. However, they rarely drive after getting to property. The family generally relies on Disney transportation to get around the resort. Chris shares a story where half the family took a bus back to the resort, and others drove. The driving members only beat the bus riders by a few minutes. Their unscientific testing convinced them that they can be happy relying on Disney transportation.

One of Chris' favorite Disney memories was when his daughter was about seven years old. The family went to see the princesses in the parade. A cast member saw his daughter's excitement and helped her get a prime position in the parade where she was sure to get the attention of the princesses. His daughter lit up with joy and excitement as each princess waved at her individually. At this moment, Chris became a Disney fan for life.

At this point, Chris has stayed at every DVC resort in Walt Disney World except the Polynesian Villas and Bungalows. He's stayed in cash rooms at the Poly; however, not a DVC room. Grand Californian is still on his bucket list. When they looked at staying at VGC, 5 people cannot be accommodated in a studio, and the point cost of a 1 bedroom at VGC became prohibitive. Staying at the DVC beach resorts are on the bucket list; however, they've never had an opportunity facilitated staying there. Many east coast families stay at Hilton Head coming or going to WDW. Chris drives down from Chicago. Chris would love to go to Aulani; however, he has family members that do not want to be on a plane that long. Chris wants to visit all the Disney parks worldwide. Chris provided this photo of her doing Garbage Can Photography from Disneyland Paris.

Chris pointed out that his son is just about to complete his Eagle Scout project that was inspired by visits to EPCOT. The Living With the Land attraction and Behind the Seeds tour inspired his son to set up a community compost for his Eagle Scout project. Chris attributes this to the edutainment factor of the park which was part of Walt's vision for his parks. A common theme among DVC families is that the edutainment factor of repeated Disney vacations makes a significant impact on their child's life goals and accomplishments.

Chris comments that joining DVC has changed the way their family does Disney. The parks shift from becoming the primary driver of the vacation to a nice additional benefit of their Disney holiday. This is another common theme among longer-term DVC members.

Looking back, Chris somewhat wishes he had bought into DVC sooner, yet at the same time he knows that he bought it when it was financially right for his family. Like most DVC families, the Salata's come across times when they wish they had purchased more points. However, Chris uses point stretching tips such as staying at a value resort on the arrival day. Chris and his family love owning at Saratoga Springs; because they like every aspect of the resort. However, there are times when he wishes he would have purchased at the Animal Kingdom as Kidani is his favorite resort. Chris points out that his number one reason for not buying AKV was fear of allergies to the animals. However, Chris discovered that allergies to the animals are not an issue.

Chris' final advice to people considering DVC, do your research. Read the contracts. Ask questions and research until you have a comprehensive understanding of the product you are purchasing. The key to long-term happiness is to understand the vacation club program fully. He also points out that you should buy into DVC because you want the accommodations. Any perks that come along with membership can and will change in a moments notice. Buy into DVC because you want to stay in Disney's deluxe accommodations.

Chris can be reached on numerous social media