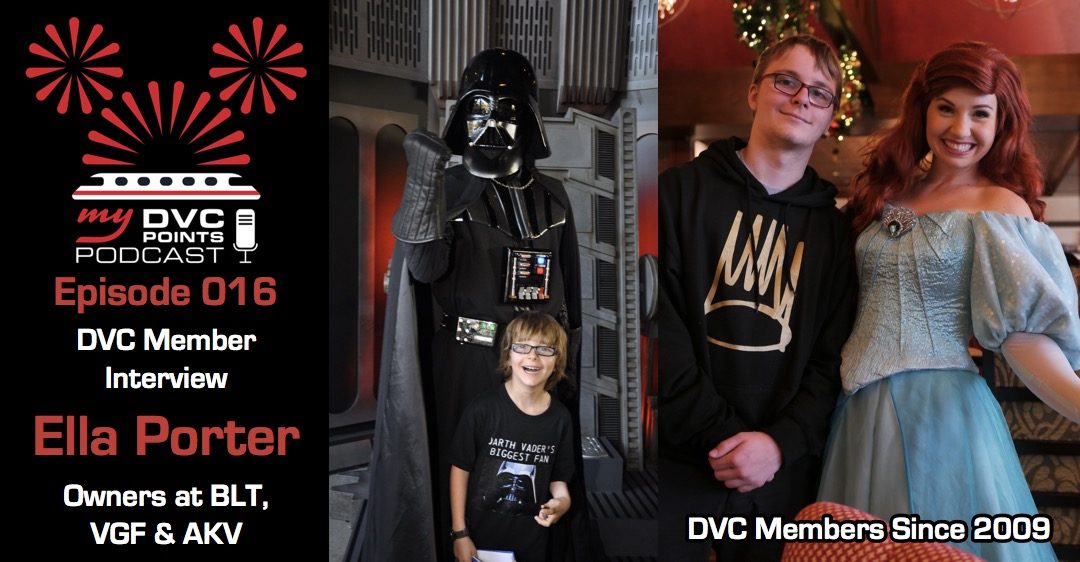 In Episode 016, we meet Ella Porter, DVC owner at BLT, VGF and AKV.

Given that her son is a huge Star Wars fan, Ella’s first trip to Walt Disney World was to take her son to Star Wars events hosted at Hollywood Studios.  The family’s Disney experience was entirely driven by the Star Wars franchise. One could argue that her son was a forerunner of the current Disney bounding trend with his Jedi costume.  As the story goes, this costume ended up being a key element in their DVC story. The family returned to Disney for the reopening of Star Tours: The Adventure Continues. Ella tried to rope drop the attraction; however, all of the paper fast passes were sold out by the time they could make it to the attraction. Being a hot day in May, the family sought shade at a DVC kiosk in Hollywood Studios. The conversation started off with seeking shade and a DVC cast member offering stickers. (Those of us who are DVC members, know how this story ends). When the cast member realized the extremely disappointed family made the trip just for that attraction, saw her son in full-blown Jedi regalia, he decided to take some liberty with the rules and create some Disney magic and offered them a fast pass to the new ride and ice cream at Saratoga Springs.  In defense of the cast member, I’m going to assert her son used the cute-kid Jedi mind trick! Who could deny this Jedi apprentice?

Ella entered that presentation with a lot of knowledge.  Her mother worked in the timeshare business with a title insurance company and she had already researched DVC prior to her trip.  The one thing she knew about timeshares was that you didn’t want to be stuck in a fixed week contract. After touring at Bay Lake Tower model at the sales center, experiencing Disney magic first hand and the family’s love for Star Wars, the family knew DVC would be right for their family.

Ella’s family absolutely loves Bay Lake Tower, we’re in complete agreement how awesome the 1-bedroom villas are at Bay Lake.  The layout and the extra bathroom are really nice. While her favorite room is the 1-bedroom at VGF, her husband and I both love BLT.  We discuss how the theming of Bay Lake Tower was designed to match Tomorrowland at Magic Kingdom. All of the Magic Kingdom resorts have a corresponding land.  Fort Wilderness and the Wilderness lodge tie to Frontierland, the Polynesian resort matches Adventureland and the Grand Floridian matches Main Street and/or Fantasy land.

Ella explains that she was looking forward to buying at the Polynesian; however, she didn’t have the best experience. The resort was brand new. She booked Poly's opening weekend. However, there were still a few minor “kinks” that needed fixing. Although it was nothing major, it was enough to turn her off from buying at Polynesian. After having stayed at Poly a couple more times; her opinion of the resort rose dramatically. To use her own words, “Poly and I are friends. We're on speaking terms.” Ella contacted her DVC sales agent to let him know about her experience, and he suggested that she should consider taking a look at Grand Floridian Villas, which was still also available, but nearing being sold out. Ella agreed to take a look. Much to her surprise, she LOVED it. She considers the one bedroom villa at VGF to be the perfect small apartment. She could live in those all year.

After a full investigation of the DVC fixed week program, she realized that she can have the best of both worlds: a fixed week and the flexibility of the DVC point system.  She can cancel her fixed week reservation and all of the points on that contract will be returned to her account like a normal member would see points. (See your DVC guide for a complete explanation.)  Ella contacted her agent and told him that she is interested purchasing VGF, however only as a studio, guaranteed week 51. As all of the weeks were already sold out, this was a long shot. Luckily a little Disney magic came Ella’s way and due to a cancellation, the exact guaranteed week and room became available. Interestingly enough, Ella started off knowing that fixed weeks were bad because they weren’t flexible.  She also knew how difficult booking Christmas week can be for DVC members. After believing that the newly available week was meant to be, she now enjoys spending the holidays at VGF annually with her family. This year was extra special because her family was able to get another glimpse of George Lucas, who was also at The Grand Floridian with his family.

Ella explains that her initial purchase at BLT and the second purchase at VGF were bought directly from Disney. However, the AKV contract was purchased via the resale market for purely economic reasons. She bought the contract almost exclusively for the 11-month window at Animal Kingdom Villas because her family loves staying the in the club level rooms at Jambo house. Club Level and Value rooms at Jambo are almost impossible to book if you don't own Animal Kingdom Villas. When she was contemplating buying AKV, she had to book a cash room in the Kilimanjaro Club at Jambo to try the rooms out before buying an AKV contract.

As Ella and her family are self-described “foodies,” they enjoy all of the diverse dining experiences available at WDW. Ella discusses one of her favorite memories. She wanted for her husband to try osso buco when they dined at Citricos at The Grand Floridian. He was not into it at all, however after Ella offered to order his first choice and trade meals if he was unhappy with the osso buco, he caved and decided to give it a try. After the dish arrived, and he tasted it, he has never looked back. Ella’s husband now looks forward to ordering osso buco every chance that he gets. Note to self after listening to the interview, try the osso buco! It’s memories like these that keep us all coming back to our favorite DVC resorts!