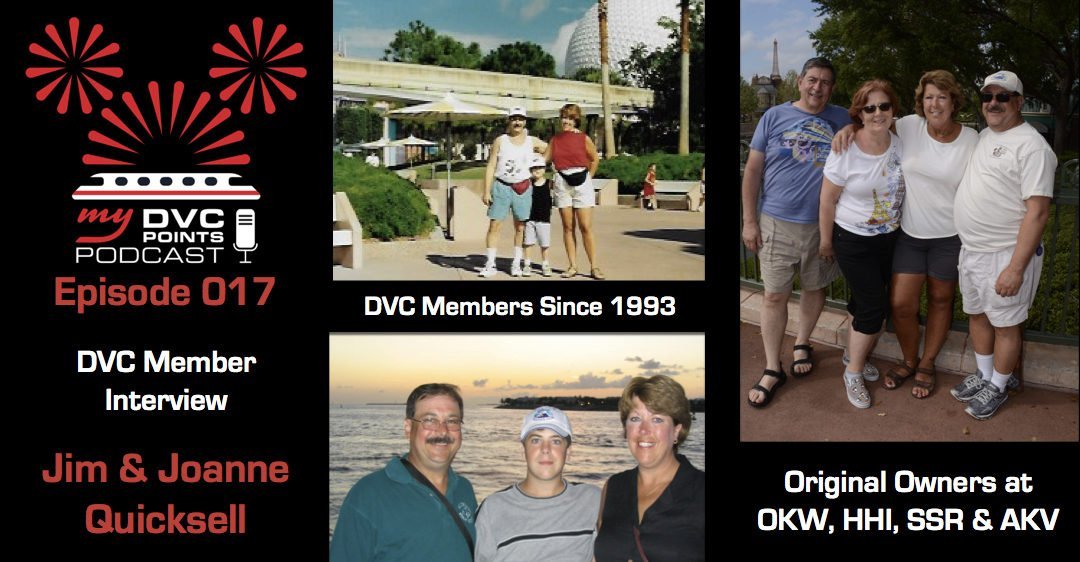 We are excited to welcome Jim and Joanne Quicksell on episode 017 of My DVC Points. Jim and Joanne are active members of the My DVC Points Community on Facebook and one of the original owners of DVC. They are the only couple I've interviewed that has not made the statement, “We wish we had joined sooner!” Spoiler Alert: They bought in the original Disney Vacation Club resort that we now know as Old Key West before the resort was 100% developed. I hope that listening to this episode brings you as much joy and magic as I found producing the interview.

In 1992, Jim and Joanne took their first family trip to Walt Disney World with their 6-year-old son. That one trip was all it took for this family to get hooked on the pixie dust. One year later, they returned. On this return trip, they knew they wanted to find a timeshare property in the area and came across the newly formed Disney Vacation Club preview center which is now known as Old Key West. They bought in as the property was still under construction. The couple had so much faith in the Disney brand that they knew the vacation club would be excellent. As DVC continued to provide excellent family memories, the Quicksells bought additional contracts at Hilton Head, Animal Kingdom, and Saratoga Springs Resort and Spa.

During that first inquiry into DVC, Jim and Joanne appreciated the low-pressure sales atmosphere they encountered. Their salesman even sent them on their way with the information to “think over” instead of working to get them to purchase points right away. One of Jim's favorite memories is a pixie dust moment at Typhoon Lagoon immediately after they closed on their first DVC contract.

Buying into DVC has allowed Jim and Joanne to take multiple Disney trips each year and take advantage of short beach trips at Hilton Head, Disney Cruises, and going to Hawaii. With the freedom that DVC gives, they have been able to stay at most of the DVC resorts. They are still waiting to get Grand Floridian, Grand Californian, and Copper Creek checked off their bucket list.

As far as time of year to visit Disney goes, when Joanne was teaching, they were limited in having to go to Disney during the summer and found a time of that season that was lower in crowds to visit. Now that they are both retired, they enjoy going various times of the year, including Spring Training to catch some baseball games and going during the Food and Wine festival is a yearly must.

Jim and Joanne both agreed that one of their favorite things about being DVC members is having the ability to share the Disney experience with friends and family. They try to take people with them on every trip. As this point in their Disney journey, and get so much joy out of watching people experience Disney for the first time. Another magical moment shared in this episode when Joanne brought her father and his experience he had meeting one of his sports idols from the New York Yankees. It blew his mind that Don Mattingly was staying in the same resort in a Disney Vacation Club villa right above them. Currently, as empty nesters, the Quicksells typically go on vacation with other couples. Sometimes it's local friends, and sometimes, they meet up with the families they met on Disney cruises or other Disney vacations. The community they have found through Disney has become family to them.

We spent some time talking about favorite Disney experiences and memories that have stood out to them over the years. Jim and Joanne share about their experience getting the Chef’s Table at Victoria and Alberts. They call it a once n a lifetime opportunity that they would love to do again if money was no object. After all these years, Jim still fondly remembers the unique coffee maker at the end of the meal. They also highly recommend the Highway in the Sky Dining Monorail Tour that they participated in this past year. Another fond memory is when a friend back home created a scavenger hunt for them to do during a trip to Disney World. The photo scavenger hunt allowed their friends back home to participate in the Disney experience vicariously.

Jim and Joanne typically will book in their 11-month window and switch at the 7-month mark. The only time they have to use the waitlist is for Beach Club at food and wine. They’ve seemed to have good luck when it comes to the wait list. As many other DVC members, Jim and Joanne typically plan their next Disney vacation on the plane ride home from Disney.

The advice they give to people contemplating a DVC membership is to remember that they will be in for the long haul so to pace yourself each trip. You have lots of options for places to stay and experiences to have; you cannot possibly do everything in one trip. Enjoy having a resort only day to relax. Each trip, look to do something unique that you have not done before.

It was such a pleasure to get to talk to Jim and Joanne. You can find them on our facebook community page. They would love to talk to you!