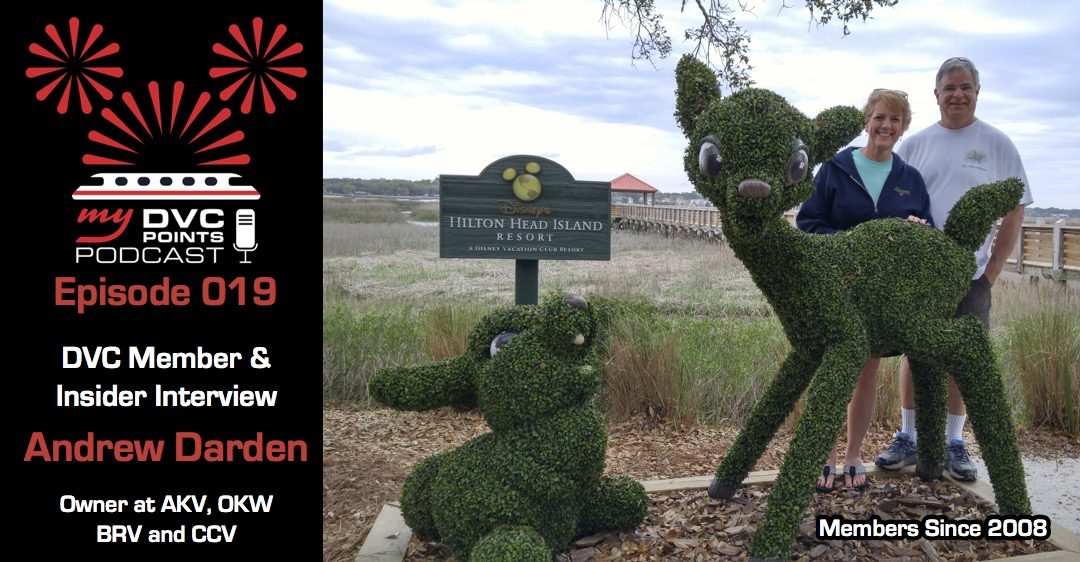 Andrew joined Disney Vacation Club in 2008 by purchasing at Animal Kingdom Villas. Shortly after buying in addonitis kicked in and the Darden family purchased a second contract from the resale market at Old Key West. Later on Disney cruises, he added on at Boulder Ridge and Copper Creek Cabins and Villas. We've included some of the Darden's family's favorite Disney photos below.

It wasn't until the resale contract closed that Andrew discovered that he had inadvertently purchased multiple use years. The AKV contract was a September UY. However, the OKW contract was a June UY.

A DVC member number is limited to one use year. As a result of multiple use years, Andrew ended up with two member numbers. Andrew quickly discovered that combining points at the 7-month mark was extremely difficult. He had to call member services and get the points transferred. (This is the reason that when buying direct, they always suggest you keep the same use year. It makes booking a room at 7-months a lot easier. If you have to cancel, all the points return to their original contracts as well. You can see all of the points from the DVCMember.com website.)

Andrew's solution involves banking one use year and using the other. He calls this concept leapfrogging his points. In this scenario, Andrew banks the June points from this year to next year. Last year, he did the same thing on the September contracts. This approach ensures one of the use years has double points available every year. When everything is said and done, Andrew wishes he had known about the problems with multiple use years and bought all of his contracts in the same use year.

One of the benefits of having two member numbers is that each member number gets two waitlists. Andrew uses the waitlists; however, he continues to stalk the website and usually finds his desired rooms are available before the waitlist functionality assigns him the villa.

Andrew tells us all about a recent trip to the Cabins at Copper Creek. He highly recommends the cabins and believes it's well worth the points if you take the time to enjoy the room. Andrew profoundly believes in spending time at the resort and enjoying all of the amenities the resort has to offer. The cabins are a terrible point value if your touring plan involves spending all of your time at the parks. Andrew points out his favorite plan on Disney property to enjoy a drink or dessert is the pools at Wilderness Lodge.

Andrew talks about being on the Disney Fantasy in 2013 and attending the DVC member program. He adds that he likes to participate in these meetings for free mimosas and free swag. While on the Fantasy, he signed up for Boulder Ridge. In 2017, Andrew once again was on the Disney Fantasy while purchasing into Copper Creek Villas and Cabins. He mentions he did this for two main reasons. He wanted the 11 month home advantage and wanted the eleven-month window to book cabins at Copper Creek. Andrew then shares his memories of his first time staying in a cabin in December 2018. “It was phenomenal!” He did also have some advice for anyone that is interested in staying in a cabin. “Do not waste your time on one night in those cabins because you will hate yourself when you have to leave.” He believes you should stay in a cabin for a minimum of 3 days. Andrew also talks about how you need to enjoy the resort and amenities if you are using those points for a Copper Creek cabin.

However, if you are someone that likes to spend most of your time in the parks, Andrew talks about using points on what he calls a flophouse. A flophouse is a basic room that you use to sleep, brush your teeth, and comb your hair,” Andrew describes. Andrew mentions that his regular trips are nine days, eight nights and he goes to a park one day and takes a down day the next day. This touring plan allows him time to enjoy the resort and spend time at the pool.

Chad asks Andrew if he liked the multiple use years and if he was a fan. Andrew feels like it depends on how you use it. If you are planning to have all of your points available at seven months, you better get the same use year. The best place for Andrew to relax for a drink or dessert is by the pool at Disney’s Wilderness Lodge

Andrew then shares some of his trips to Disney before buying into DVC with his first trip being in 1974 when he was nine years old. He also shares about other trips with friends and family. In January 2008, was when he decided to buy into DVC because his daughter loved it so much. They have been going twice a year ever since joining. He believes DVC forces you to take vacations and enjoys spending time with his family. They have been to Disney 33 times in 11 years and still feel like they haven’t done everything. Andrew’s daughter keeps a list of things they have done and haven’t done

Some of Andrew’s favorite memories include his daughter when she was 7 or 8 years old seeing her favorite characters Pooh and Tigger. He shared a very memorable moment he will never forget of his daughter jumping into Tigger’s arms. Andrew mentions always to pay attention to the magic around you. Other favorite memories are spending time with his friends and family and watching them all have fun. Andrew adds that the best thing you can do with your membership is to invite close friends and family to go with you. He enjoys the quality time

On Andrew’s bucket list is staying at Aulani for at least three weeks. He does conclude by giving some advice to prospective members. He believes if you can afford the initial cost, Do it!! It will be the best thing for your family and will provide vacations for the rest of your life or until the contract ends

For current members, he adds that if you are not able to get the room you want, look at seven months to see what is available. Try different resorts. He bought in 2008, but like many others, he wishes he would have purchased sooner. You can follow up with Andrew on My DVC Points Community group on Facebook.