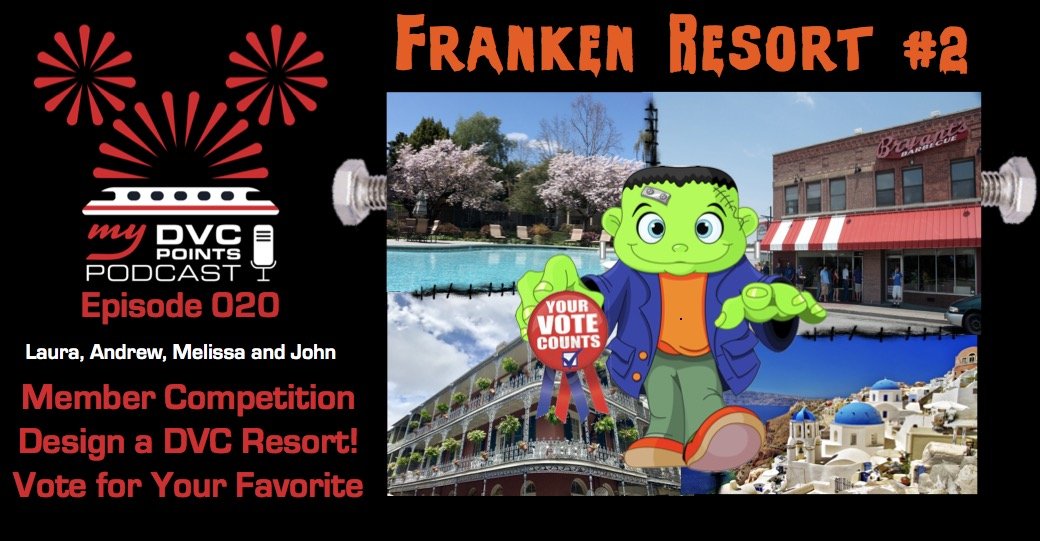 We invited four listeners in for some DVC resort armchair Imagineering. We asked them to create a resort so desirable, that a DVC member would be happy staying at this resort for the remainder of their contract. We need you to vote on their proposals. The winner will advance to the final round that will have a celebrity judge. McNair Wilson, former Disney Imagineer will be judging the final round.

Who deserves your vote? Laura with a Japanese themed resort, John with a Historic Kansas City Main Street, Andrew with a Greek Isles Resort or Melissa with a New Orleans Big Easy resort next to the Magic Kingdom!

Theme: Deluxe DVC resort with an immersive Japanese experience.
Location: Given the popularity of walking from the resort to the park, building Sakura near the entrance to Disney's Animal Kingdom will ensure that all four parks have a resort within distance.
General Overview: Upon entering guests are welcomed by Kimono-adorned cast members with the traditional Japanese bow of respect. Décor will be Japanese theme including tatami mats, rice paper walls (decoration only), and anime artwork.

Theme: The Greek Isles
Location: Two possible locations, one north of Coronado Springs and a second possible location would be on the east side of Bay Lake.
General Overview: A Boutique resort featuring the white houses with the blue domed roofs of the Greek Isles. A Mediterranean style main pool, a mockup of the Med with the rooms situated to overlook the sea with their private infinity pools.

Melissa's The Villas at the Big Easy

Theme: New Orleans French Quarter and Bayou Plantations
Location: Between the Grand Floridian and the Magic Kingdom
General Overview: Given the popularity of Port Orleans resort, we're going expand on the New Orlean's theming with this resort. New Orlean's square was the first Disney park expansion.

Theme: Hometown, USA (Turn of the Century Kansas City)
Location: The northwest edge of the Magic Kingdom between Floridian Way and the WDW Railroad tracks. Near Frontierland and Adventureland.
General Overview: Inspired by the decor of Main Street USA and the theme park proximity of the Grand Californian, this resort replicates three turn-of-the-century Kansas City, MO buildings.

Restaurants at Melissa's The Villas at the Big Easy

Restaurants at John's Gateway to the Magic Kingdom

Quick service: Aashi Ramen (rising sun ramen) Ramen is the most popular food in Japan. There are varieties of flavors based on region. This Ramen quick service will have many varieties of ramen to please all appetites along with standard type American food.
Table service: Shinkansen-Bullet Train sushi. The famous and unique style of restaurant in Japan has very few replicas in the United States. A variety of sushi travels by the tables on a chilled conveyor belt.  Guests take what they desire as the food passes.  Each plate contains a microchip for pricing purposes.  Sushi can also be custom ordered and arrives on a separate conveyor belt directly to your table. It will look like a Shinkansen.)
Bar and Lounge:  Ongaku Karaoke Bar. Ongaku means music. Will have bar type food: Yaki Tori grill, taco-yaki, tempura, etc.
Signature restaurant:  Kiku- Meaning ‘chrysanthemum”. Chrysanthemum is the Imperial seal…fitting for a signature restaurant. It will be a traditional style restaurant with floor seating.

Pools at Melissa's The Villas at the Big Easy

Feature Pool: A lazy river surrounding a sand bottom pool with a zero entry side for the smaller guests.
Adult Only Pool: This pool will be on the top of the Bayou tower, will have a pool bar and provide excellent firework viewing from inside the pool.

Pools at John's Gateway to the Magic Kingdom Resort﻿

Feature Pool: A large, two-section pool, connected by a bridge between the resort and the theme park. The north end of the pool will have a water slide.  The south end will be the “quiet section,” and the “Lazy Missouri” river will connect the watering holes.
Pool Bars- Off the northwest section of the pool there will be a medium sized building, modeled after the 1900 Kansas City Convention Hall. The side facing the pool will be an indoor/outdoor full-service bar and snack bar. The building will also house an arcade, changing rooms, and public restrooms.
Lazy River: The “Lazy Missouri” will wind its way through the resort just as the Missouri River winds through Kansas City and will complement the existing creek that runs through the resort site.

Pool: Imagineering could design the pool to make it emulate the cliffs and deep blue color of the mediterranean sea. This pool offers two new features not found elsewhere in DVC: a diving element inspired by cliff diving and a swim up bar.
Grand Villas Private Pools: These private cliff resorts would each have a private infinity pool overlooking Bay Lake.

Three 10-story towers, each designed after a different 1890s Kansas City Hotel offers 284 units. The location of the buildings, their orientation toward Cinderella’s Castle, and the configuration of the rooms. 85% of units will have some type of park view 121- Studios, 75- 1 Bedroom Units, 36 Two bedroom units, 3 three Grand Villas and 6 Gateway Grand Penthouse Villas that are five bedroom penthouse villas.

Standard DVC offering of Studios, 1- & 2-Bedrooms dedicated and lock-off units. The Grand Villas will be expanded with private infinity pools and can sleep up to fifteen people.

Melissa's The Villas at the Big Easy Room Composition:

Three towers with each floor having a different decor. Much like a different float in a Mardi Gras parade. All the resorts will have a mix of deluxe studios, one bedroom, and two bedroom dedicated units. A main feature is that the deluxe studios will have more kitchen than traditional DVC studios to allow for more cooking in the studio rooms.

Laura: In addition to the traditional bus system, guests can walk to Disney's Animal Kingdom front gate or use an underground themed tunnel to a special entrance within the Animal Kingdom park. The other contestants talked Laura into building a Japanese bullet train to all the other resort areas.

Andrew: Bus service, a nice long walking path to the Magic Kingdom, and for the club level Grand Villas; private Minnie van for the length of your stay.

Melissa: Walk or Boat to the Magic Kingdom. Traditional bus service for all of the other WDW destinations.

John: Guest transportation options include standard bus service, a resort-exclusive stop at a brand new Gateway stop on the Walt Disney World Railroad, a dedicated paddle boat transport from the resort via Rivers of America to Frontierland, and a Disney Skyliner from resort to the Magic Kingdom monorail station.

John: The Gateway Depot will also include a veranda with a full-service bar and an ample lounge/viewing area of the MK and the fireworks. Mickey & other Fab 5 characters will meet and greet in the grand lobby, center tower throughout the day. The resort will have an arcade. Also in the evening, the Dapper Dans, jazz combos, and other street artists and musicians will wander throughout the resort, however, the MK is the main attraction. The biggest perk would be early park entry to Kingdom each day.