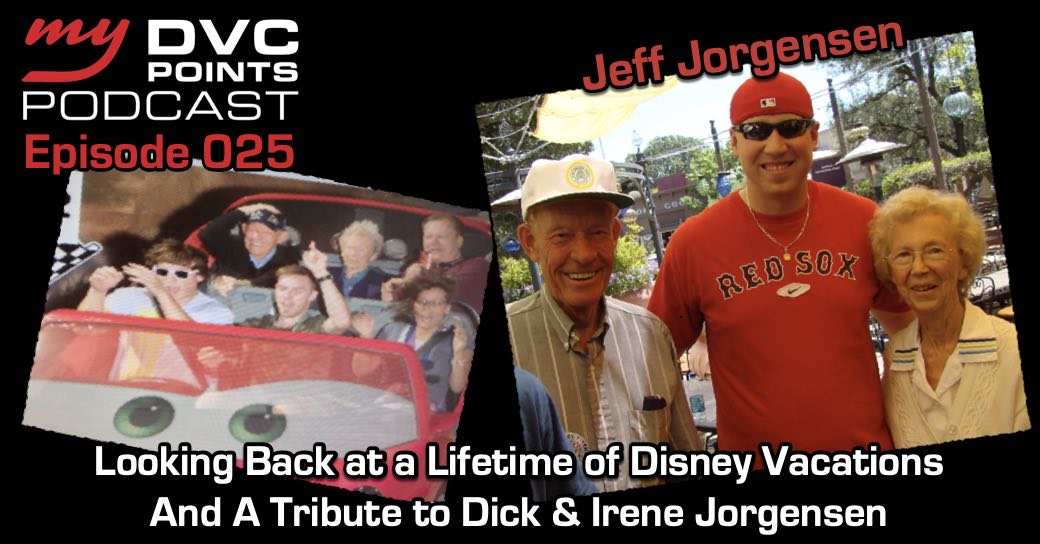 Episode 025 is a mini-member interview with a unique backstory.  Just before Laura and I sat down to record a Membership Extra’s review episode, she mentioned that I usually do a full interview with a member before having them join a review show.  So we decided to start off the review episode with a mini-interview. What came out of that interview was a moment of pure Disney magic. This short conversation nails the purpose of my podcast so definitively, that I wanted to expand on the concept in the post-show commentary.

Jeff and I met when we were both staying at the Grand Californian in April of 2019.  We had both signed up for the three DVC membership extra events. Jeff saw the My DVC Points T-Shirt and come to find out he’s an avid podcast listener.

Jeff and his wife bought into Disney Vacation Club about a year ago.  Their home resort is Aulani and they have stayed at Bay Lake Tower, Animal Kingdom Villas and Grand Californian.  They started discussing buying into DVC almost 10 years ago when they were dating. Disney’s always been an important part of their lives.  It took about 10 years for the Jorgensen’s to get things settled with buying a home and starting a family.

Jeff recalls his first trip to Walt Disney World as DVC members where they stayed at Disney's Animal Kingdom Villas – Jambo House. His wife instantly fell in love with the savannah view rooms. He explains that the family never orders room service; however, they ordered room service for breakfast because they didn't want to leave the villa and the savannah view.

Looking back, Jeff now realizes that the vacations were not just fun times at Disneyland. He now realizes just how much it costs to bring 32 people on a Disney trip. He realizes that his grandparents were investing in their family by building bonds, relationships and creating traditions.

Come to find out, Jeff has been coming to Disney every year since he was a child.  His grandparents believed in quality time together as a family. They believed in creating a legacy of a lifetime of family memories.  Jeff discusses annual trips to Disneyland where his grandparents paid for their entire extended family to come to Disney. As an adult, he looks back with a sense of amazement that his grandmother planned out and paid for Disney trips for 32 people.

The feature art for this episode has some special meanings. Jeff indicated his two favorite pictures of Disneyland were in Frontierland just outside Rancho del Zocalo with both his grandparents. The second photo is ride photo from Radiator Springs Racers where his 80-plus-year-old grandmother ended up setting the record straight that she wasn't too old to enjoy the ride. As Jeff mentioned in the episode, Irene passed a few months after that photo was taken.

Prior to spending most of my free time creating Disney Vacation Club content, I spent a lot of time studying Christian Ethics and Personal Finance. I spent a decade helping people manage their personal finances. Because of this, I've developed analytical skills on both a qualitative and quantitative fashion. I notice things that a lot of people typically don't notice.

We recorded this episode in Late April of 2019. The title of this episode foreshadows the post-show comments. Before we could gather the photos and get the show edited. Dick Jorgensen passed. Regretfully, we weren't able to share this episode with him. That being said, I would like to pay honor and tribute to Dick and Irene Jorgensen. I never had the chance to meet them. However, I did have the pleasure of getting to know their grandson and spending a few mornings with him at Disneyland plus hours setting up the interview, exchanging instant messages, photos and stories plus another couple hours recording. Jeff has become one of many high-quality people that I've met through the Disney Vacation Club and seeking to share people's stories.

The stories Jeff tells about his grandparents speak volumes to their character and his own. Here's a couple that made a significant financial investment in their family year after year in taking them on high-quality Disney vacations. Here's a couple that stayed together and held hands in Disneyland into their 80's. Here's a couple with the means to take 32 people to Disneyland annually yet dress very appropriately yet modestly. They choose quality family time over high fashion.

I start putting all these factors together and I have to say thank you. Thank you for leaving a legacy. Thank you for setting an example and affirming the lofty goals I have as a middle-aged father are achievable. When I'm in my 80's I want to stay in Grand Villas filled with awesome grandchildren like Jeff. I want to be holding Laura's hand walking through the park. I want to be the grandparent who still rides Radiator Springs Racers and rock's Mickey ears.