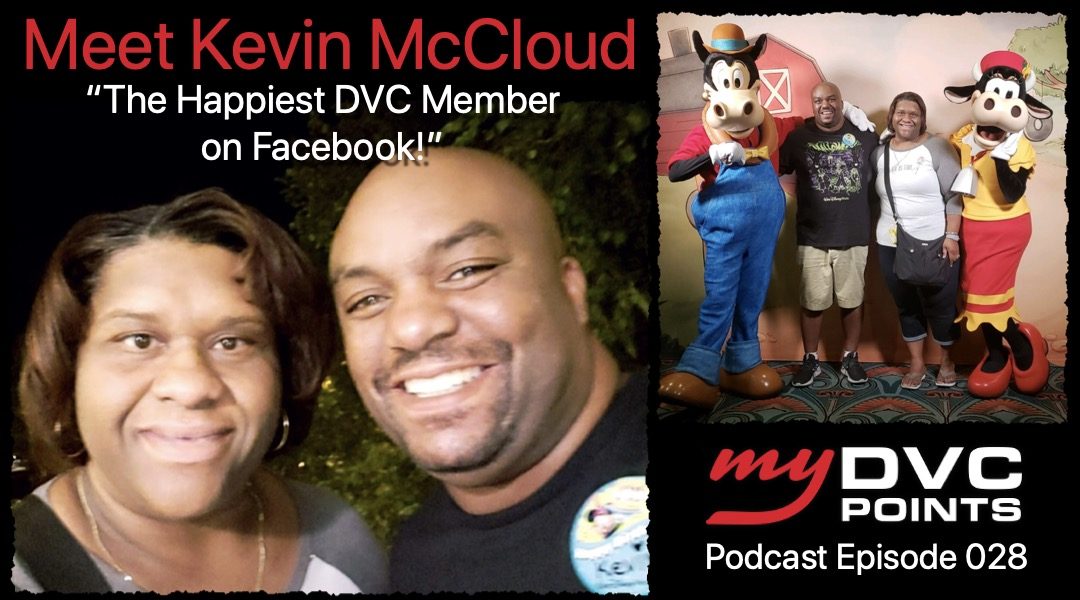 “Hey, my DVC sisters and brothers!” If you're a member of any of the DVC Facebook groups, that's all the introduction you need to realize our guest for this episode is none other than Mr. Kevin McCloud. I consider Kevin “The Happiest DVC member on Facebook!” Kevin has the gift of packing pixie dust into pixels and filling our Facebook streams with pure joy.  I find it ironic that Kevin shares a last name with the author of “Have You Filled a Bucket Today? A Guide to Daily Happiness for Kids.”  Just like the posts, Kevin brings happiness and joy to episode 028 and its sure to fill your bucket!

In 1996 Kevin and Yolanda started to coming to Walt Disney World when they were still dating. In 1997, they went on the DVC tour as boyfriend and girlfriend but thought it was best to make a commitment to DVC after the commitment of marriage.  In 1999 they were married and bought into DVC in 2000. Kevin was working at a Disney Store and it took 4-5 other cast members to convince him to buy DVC.  Bear in mind in 2000, you didn’t have podcasts, facebook groups, and other consumer media.  Kevin was pretty much reliant upon his DVC guide for information and members that he personally knew from working at a local Disney Store.

When asked about getting more points, Kevin believes if he can’t get it done on the points he has now on four contracts, it’s not happening.

Looking back, Kevin realizes that life didn’t really work out for them to buy into DVC until after they got married.  Could they have bought in earlier?  Yes; however, they did was best for them.  Looking at the current point costs, he doesn’t know if he could economically pull off joining at today’s prices.  However, a couple of years ago, Kevin’s mom bought into DVC at Copper Creek after seeing the joy that DVC has brought Kevin and Yolanda.

Kevin explained that they do not have any kids of their own; however, they enjoy bringing their family to Disney. From parents, in-laws, brothers, and sisters to nieces and nephews.  Kevin and I discuss how our families are spoiled.  His niece demands “High Excellence” and doesn’t want to stay in a studio.  Chad adds that his family is #1bedroomspoiled!  After 20 years of going to Disney, Kevin has a hard time limiting his favorite Disney memories to just a few stories because there are so many awesome memories that all involve family members. Mickey’s Not So Scary Halloween Party was the first thing that came to mind.  He also has very fond memories of his nieces when they were young.  Another trip he had a family member with some disabilities absolutely light up with joy at every single character meet.  Another favorite memory is when he brought his late mother-in-law to see Fantasmic at Hollywood Studios.  It was her favorite Disney event ever.  Kevin finds so much joy in Disney that every trip is magical.  With 20+ years of coming to Disney; he can only sum it up as quality time with his family.  DVC allows him to bring his family with him and that’s the key to happiness.

Kevin has met so many DVC members on Facebook, that he is always recognized when he’s at a DVC resort.  People constantly come up to him and Yolanda.  His posts have become almost legendary in the DVC community.  He belongs to numerous DVC Facebook Groups where he posts pictures, stories, and happy thoughts. Kevin explains his success in community building. When people take the time to write on his posts, he always responds back and hits the “love” button. The “like” button won't due because he genuinely loves interacting with DVC members. Kevin’s posts are always super positive.  I consider his posts packages of pixie dust delivered in pixels on Facebook.

At Moonlight Magic events when everybody in the park is there with a DVC member, Chad joked that Kevin could hold his own rare character meet and greet. Kevin laughed and commented about how much he enjoys meeting other DVC members and confessed that at least 10-15 people recognize him and go out of their way to meet him.

He uses the 11-month window at all four resorts.  He didn’t catch on to the 11-month window as that wasn’t really a feature of DVC when he first joined.  However, 95% of the time Kevin ends up staying at Saratoga Springs Resort.  He loves the resort and it allows him to bring more people on the same points.

Kevin’s favorite resort is Boardwalk Villas with Saratoga Springs Resort Congress Park coming in a close second.  Although they are AKV owners, they haven’t stayed at AKV Club or Value rooms.  Overall, Kevin prefers Jambo House over Kidani; however, the benefits of the extra and larger bathrooms at Kidani cannot be denied.  Kevin’s only major complaint about the AKV is that he always ends up in a room that is a considerable distance from the lobby.  He really is only concerned about walk when his mom is with him who’s on a scooter.  We agreed that the parking situation at Kidani is excellent; unless you drive back from the parks late at night and cannot find a spot.

Kevin points out that Boulder Ridge at Wilderness Lodge is a hidden gem at DVC.  The lodge is a very immersive experience that transports you to the Pacific Northwest.

We discuss Old Key West.  It’s quickly growing on my family’s preferences.  Kevin’s only reservation about Old Key West is the bus system in relation to distance from the villas. The buses do take a while to weave through the resort and that adds to total travel time to and from the parks.

Kevin’s family likes to take the magical express to the resort and then rent a car that day or the next day to have for driving around Orlando.  Chad discusses setting up both magical express as a backup plan to having a rental car.  If you ever have to add Magical Express at the last minute, it can be difficult to find a seat on a bus at a time when you should be leaving.

In terms of groceries, Kevin typically like to drive to Wal-Mart and pick up groceries.  In the past, he’s used the Dizzy Dolphin Grocery Delivery service a few times.  He’s had good luck with their services but finds them a little on the expensive side.  He usually orders a cake from Dizzy Dolphin; however, on the last trip, the cake was upside down with frosting on the lid when it made it to his room.  He called Dizzy Dolphin and they refunded the cost of the cake without any issues or hassle.  Their customer service is excellent.

Kevin would take a 2-week vacation spending a week at Bungalows at Polynesian and spend an entire week in a 1 bedroom villa at the Grand Floridian with his wife Yolanda. Besides, these two items, after 20 years of coming to Disney the only things left are going to Aulani and touring the Disney Resorts in Asia.

Today's Show is Brought to You By: