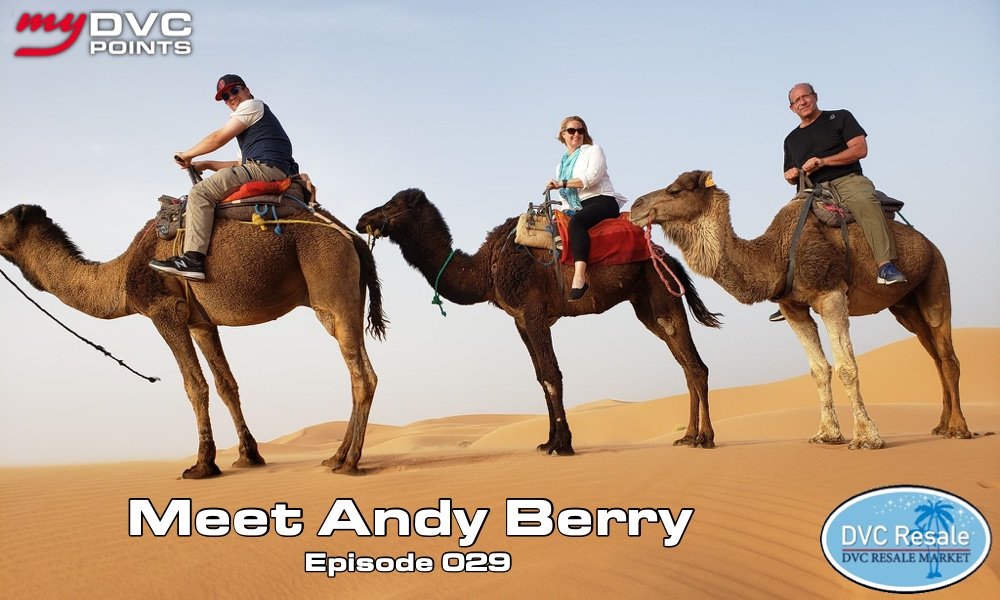 Have you ever wondered how a DVC guide spends their points? Realistically, DVC is their job. What do they do to get away from work yet create magical vacation memories for their own families? Shortly after Andy Berry joined DVC as a member, he joined the DVC sales team as a guide. Earlier this year, he transitioned over to DVC Resale Market. In episode 029, Andy shares his DVC story and we get a glimpse of how a DVC guide's family utilized their DVC points. Join in to learn about RCI, cruises, and Adventures by Disney.

In episode 029, we meet Andy Berry. He and his wife, Jolie, have been Disney Vacation Club members since September 2010. While on a weekend cruise aboard the Disney Magic, they decided to join DVC.

Andy and Jolie decided to buy into DVC after she had booked a Disney cruise to Alaska. Andy and Jolie knew that they wanted to continue taking Disney related vacations with their family. He says it was simple economics that led them to the decision to purchase their Vacation Club membership. Wanting to share the legacy of Disney with their four kids and being able to pass it down to their grandchildren was a significant selling point for them, too. They chose Bay Lake as their home resort, although they have yet to stay at Bay Lake.

After going through the process of buying into DVC, Andy's guide suggested he look into joining the DVC sales team. Andy decided to become a Disney Cast Member as a guide. Before joining the Walt Disney Company, Andy had spent many years as a CFO, which provided him with a background in finance. Andy discussed the qualities he believes Disney looks for in a DVC Guide Member, including loving the Disney brand and embodying Walt's legacy. He says he likes to treat every tour he does as if Walt is sitting with them during the conversation. After working as a Direct Guide for DVC for eight years, Andy transitioned over to DVC Resale Market to have more time to spend with his family. This also allows Andy to serve buyers and sellers.

As someone who has worked in the direct market and resale market of Disney Vacation Club sales, Andy recommends purchasing through the resale market.

When Andy's family began planning their first Adventures by Disney vacation, the company was coming up on their tenth anniversary. Andy's wife suggested they take one of the first trips offered when Adventures by Disney was first established. Her idea led them to the “Quest for the West” trip to Wyoming. While in the airport returning home from that trip, the family was looking over the brochure for ABD and chose where their next trip would be: South Africa.

Among the seven trips that Andy and his family have taken with Adventures by Disney are destinations to Peru, Norway, and Costa Rica. “Disney thinks of everything so thoroughly,” Andy says. He feels their experiences in those places were so complete that they don't feel a need to return there because of Disney's attention to detail in planning the trips. Another point Andy makes about Adventures by Disney is their dedication to the first-class service. He says while traveling in Peru with Adventures by Disney, he became ill. Within a half-hour of letting their Guides know he was sick, they had brought him medicine to help him overcome his illness.

Andy says they had a first-class experience on their trip to South Africa thanks to ABD. He especially loved learning about and engaging in the culture there and being immersed in the Sahara & Savannah areas. A memory that stands out from the trip was seeing the animals in their natural habitat.

Aulani – A Excellent Use of Your DVC Points

Andy and his family have stayed at Disney's Aulani Resort and absolutely loved it. He offers advice when planning your trip there: visit places off-property every other day and then stay at the resort on alternate days. He says this way guests can immerse themselves in the resort and all it has to offer while still having fun off-property around the island. Aulani is Andy's favorite Disney resort because of how they bring the Disney culture together with the Hawaiian culture.

For Andy and his wife, love for Disney started well before buying into DVC. When asked about his favorite Disney memory, Andy quickly answers that it was getting married at a Disney resort. He describes how he remembers seeing his wife arriving in a glass carriage pulled by white horses. The processional was complete with accompanying trumpeters.

Andy and his family still have several places on their DVC bucket list. He says he wants to visit Hong Kong & Shanghai, and then he will have been to all the Disney Parks. Disney's Hilton Head and Vero Beach properties are also in Andy's plans for vacations outside the Parks. Andy is also eager to go on more Adventure by Disney trips, including ones to Egypt, Greece, and Italy.

My DVC Points Podcast is sponsored by DVC Resale Market and Vacation Club Loans and by community members in My DVC Points VIP Producer Club. Note – the interview with Andy was recorded before entering a sponsorship agreement.