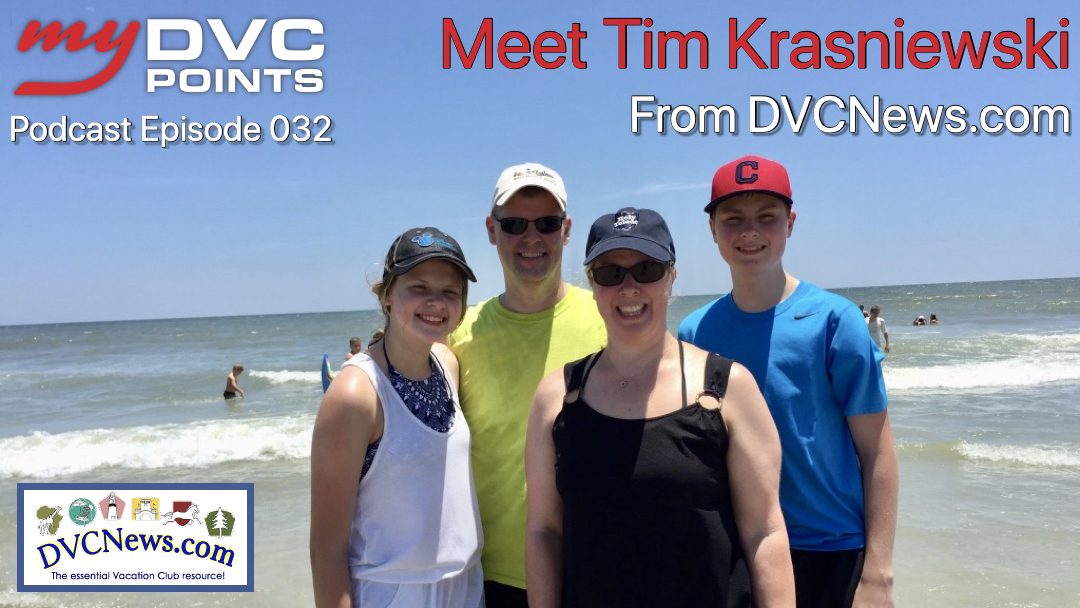 Tim has been a member of the Disney Vacation Club since 2003 when the family bought into Saratoga Springs Resort. He has turned his love of Disney and DVC into a business, as he owns and operates the DVCNews.com website.

Tim, who lives in the Midwest with his wife, a son, and a daughter, first came to Walt Disney World during his honeymoon in 1997. Tim’s wife likes to tell a story from when they stayed at Port Orleans French Quarter: while on the bus to the resort, they passed the Disney Vacation Club sign that is on Bonnet Creek Parkway near Old Key West. Tim’s wife said that they should look into DVC, and Tim responded, “When we make our first million!” He laughed and said they ended up purchasing despite not hitting that financial milestone.

Tim says one of the most memorable parts of the honeymoon trip was when he and his wife participated in the sea scene from the old Backlot Tour at Hollywood Studios – Tim was the one who had gallons of water dumped on him, for those who remember that attraction!

After the honeymoon trip, Tim and his family came to WDW in 2002, when his son was 18 months old, along with his parents. They rented points to get a two-bedroom villa at Old Key West. Five months later, they rented points again for a one-bedroom villa. After that, Tim and his wife went through the familiar process of making spreadsheets to determine whether it was worth buying into the Disney Vacation Club.

Tim and his wife decided to buy points at Saratoga Springs, right when that resort became available. He was attracted to the resort by its design and feel, along with its location in what is now the Disney Springs area. He was thrilled to get his shares for $79 per point, locked in for 50 years. Most of the other resorts at the time had a contract length of only around 40 years. Tim called the purchase a “no-brainer” due to the extra years that he would have ownership. He remains happy with the decision, especially with the expansion of the resort – including a stay at the exclusive Treehouse Villas only a week after they opened.

Tim’s son was 2 years old and his daughter was 6 months old when they joined DVC. The family later bought into the Boardwalk, as it’s a resort that they all enjoy, and the standard rooms provide great value – just be sure to book them 11 months out if you plan on visiting during a busy travel period! Tim called the sitting area outside of the Ample Hills Creamery and ESPN Zone his favorite place on property to unwind and enjoy a drink or dessert after a busy day, and he says the Boardwalk is his favorite resort due to the proximity of so many areas – Epcot, Hollywood Studios, and the Yacht & Beach Club. It will be interesting to see if that intimacy remains once the Skyliner gondolas begin operation this fall.

Away from Walt Disney World, Tim bought points at the Grand Californian at Disneyland right when they went on sale. His family went on to use them with friends to rent two-bedroom villas for several years before selling the points for a tidy profit. Tim said this is one of his favorite resorts, especially due to the proximity to the back entrance of the California Adventure park, which provides a level of convenience that can’t be matched at WDW, as you can go from your room to being on an attraction in just a few minutes.

Tim purchased his points at Grand Californian at the right time, as sales were slow at the beginning due to people in southern California not being exactly sure what DVC was. The sale also began in the rough economic period of 2008, and it came around the same time as the opening of Bay Lake Tower at the Contemporary, which was a hot property due to its being the first DVC at a Magic Kingdom-area resort. It has since exploded in popularity.

Aulani and the resorts at the Wilderness Lodge are both still on Tim’s bucket list. Tim’s wife isn’t keen on air travel, so a good strategy to get the family to Aulani would be to break up the travel with a stop in California to enjoy Disneyland for a few days!

He has been on Disney Cruise Line three times, including one promotional trip from buying his points at the Grand Californian – that’s quite a nice incentive! (Chad and Tim agree that using points for cruises is not the best use of points).

As far as Membership Magic events, Tim says that they have not participated in any of the meals, but he and his family have attended nighttime events at Typhoon Lagoon, and they enjoyed the unique experience of being on the slides at night in a park that doesn’t hold regular evening hours.

Tim’s family also saves money on eating out by using the kitchen to its full capability. They have breakfast (cereal, eggs, frozen waffles, etc.) in the room daily, and they also will use the grills on-property, along with making macaroni and cheese, tacos, and deli sandwiches. Eating only one meal a day out in the parks turns out to be quite the money-saver for the family.

Tim’s advice to prospective Disney Vacation Club members is to buy points with your destination in mind, whether it’s a theme park or the beach resorts (Aulani, Hilton Head, or Vero Beach). He doesn’t advise buying points to use on cruises or trips through Adventures by Disney. Determine how often you would be visiting these destinations, and use that information as the basis on what you buy.

His advice to new members is to not get locked into your home resort. “You never know what surprises you’re going to find as you go along,” Tim said. As an example, Tim had never considered trying out the Grand Floridian, but, on a whim, he and his wife stayed there for a couple of nights and they ended up loving it and later returned there for a week in a two-bedroom villa. He also enjoyed the different types of vacation experiences that Hilton Head and Vero Beach provide.

Due to his frequent Disney trips, Tim was an avid follower of the usual fan sites (like AllEars.net) and noticed that there was a need for an information archive on Disney Vacation Club, so he decided to fill that niche. He passes along official DVC membership information and gleans news and info off of message board discussions to provide it in a convenient location for his readers. There is also tons of information and photos of each DVC resort – which he says is sometimes tough to keep up with, due to Disney changing things up so frequently!

His goal is to make the website a “one-stop-shop” for all things DVC. Tim also tries to steer clear of the rumor mill, so he’s only posting quality news and information, and if he does post something that he doesn’t feel has enough validity to meet his standards, he will be sure to mention where the source of the information is coming from.

If you’d like to connect with Tim, you can visit his website and sign up for his email newsletter, which is delivered in both daily and weekly formats. While there, you can also get information on all his social media channels. He’s passionate about helping people through their DVC journey, whether they are entertaining a purchase or looking for something new to experience during their next trip.

My DVC Points Podcast is sponsored by DVC Resale Market and Vacation Club Loans and by community members in My DVC Points VIP Producer Club.

If you enjoy the show, please join VIP Producer's Club. Your support allows us to produce a weekly show and has special insider perks!