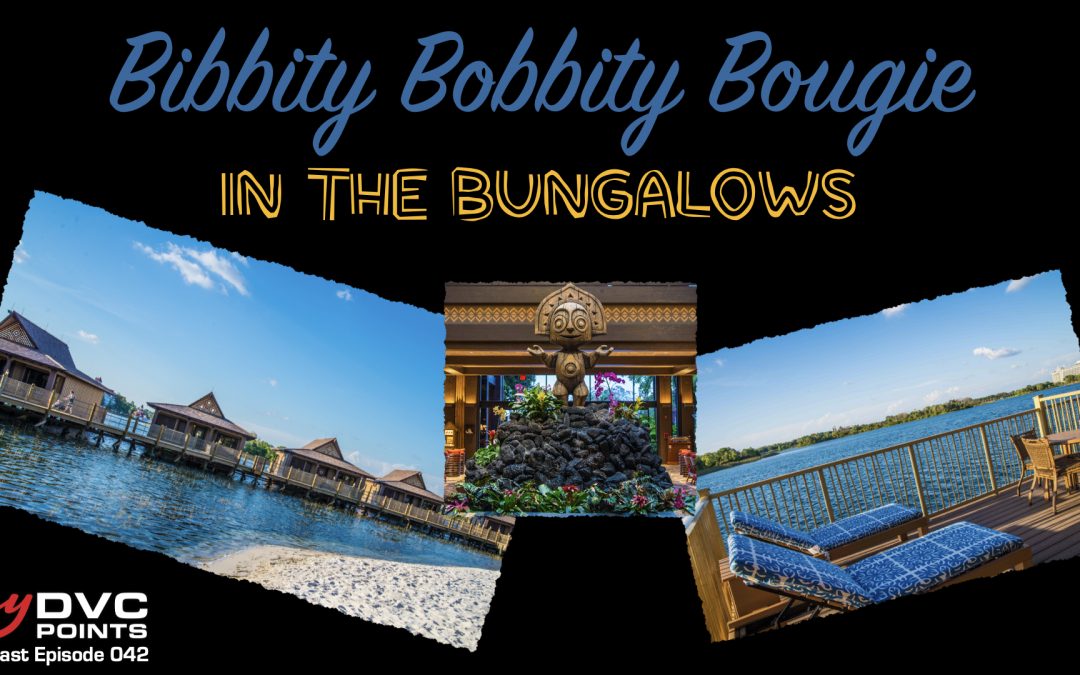 My DVC Points
042 Getting Bibbity Bobbity Bougie in the Bungalows!

The Polynesian Bungalows are the most point expensive accommodation in all of the Disney Vacation Club. They come in at 53,903 points a year and average 147.68 points a night. The Oceanview Grand Villa at Aulani (146.35 average points) and the spacious Grand Villa at the Grand Floridian (145.83 average points) take the silver and bronze medals. A single weekend night at Christmas or Easter week requires 227 points. However, guests can stay the entire month of September at the Animal Kingdom value studios for 248 points. However, the members point out the bungalows are also the most magical accommodation in all of DVC. The view of the castle and fireworks show at night cannot be beaten.

Historically, we had joked on the show before that the bungalows were an epic fail in DVC. They appear to sit empty most nights. You rarely hear of a member staying in the bungalows. That made finding the cast for this show a near-impossible feat. Finding members who have visited here and were willing to join a podcast was a year-long endeavor. However, it was worth the wait.

The cast for this episode packaged up some pixie dust in the podcast:

How did you end up at the Bungalows?

Melissa – had to cancel a reservation and ended up with excess points that were not bankable. She had always wanted to try out the Bungalows but never could convince herself to do so until she was in use or lose scenario.

Marissa – as we heard in episode 033, Marissa is an Orlando local and loves to use her points on splurge stays. She considers the bungalows the biggest splurge out there; however, she prefers the grand villa at the Grand Flo. Marissa delayed her vacation due to expecting a baby. She was also in use or a lost scenario. After her son was born, Marissa decided to book a splurge stay at the Bungalows. The Moolman's invited their friends and family to meet their newborn son at the bungalows.

Debbie – although she is an owner at the Polynesian resort, she was lucky enough to stay in the Bungalows on a work trip. She was contracted to host this video. However, if she were in a party of four, she would prefer the bungalows over the Grand Floridian's Grand Villa.

As we heard in episode 040, Marissa also highly recommends ordering the twilight feast from room service. This is the meal from Ohana with huge portions. Pro-tip – order room service for one, and it will feed two people.
The horns from the ferry boats are an issue frequently discussed in the DVC community when staying at the Polynesian resort. The horns didn't phase Debbie and Melissa. Marissa commented that she heard them at 6 and 7 AM; however, they had a newborn, so they were up early anyway. However, the consensus was if you were there for an entire week, the horns may be an issue.

Another issue we hear about is the private pool attached to the bungalows. All of our guests used the Lani pool; however, none of them were there in winter months, where the unheated pool could be an issue.

One thing that all three guests had in common was that they all invited guests with them to visit them at the Bungalows. They figured if they were splurging on this accommodation; they wanted to share the experience with friends and family that could come join them. However, they all commented that they were the only families on their patios watching the fireworks.

Debbie believes the bungalow porch is the absolutely perfect place to watch the fireworks show. She was almost moved to tears. Marissa agreed. Melissa added that the electric light parade was also an incredible experience from the bungalows. All three ladies agreed that this is by far the most magical location in all of DVC.

Melissa commented that one night is nowhere near enough time. She recommends at least two nights if not more.

Chad asked if the sleeping 8 people were tight? Marissa and Debbie commented that the ideal occupancy is a single family of 3 or 4 people. The bungalows have a king bed in the master. The second bedroom has a queen bed and a murphy bed. The living room as a pull-out couch and a murphy bed.

The fit and finish of the bungalows are a classy beach style. Marissa considers the colors and wood fixtures to be perfect. They commented that the form is classy Polynesian with an Aulani type influence. Marissa went on to describe the bungalows as a very masculine and classy decor.

Despite the high point cost, all three ladies would book another stay at the bungalows. They all agreed that staying in the bungalow is resort only day.

Chad reached out to Disney Travel agent Brandi Constantine of Mickey Adventures to do some research on the bungalows. We came to the conclusion that you may be able to find the cash rate on the bungalows that may challenge the point cost. Sometimes the bungalows are excluded from the cash deals and other offers they are included. Chad and Brandi suggest checking with a Travel Agent to see if Disney has published a deal.

Hands down, all three ladies agreed that the second option would be the best use of our points. The ladies pointed out, our kids are only small once, and it would be an experience never to forget. (We have had numerous experiences like this throughout our membership).

The other consensus is that when you're staying in the bungalows, don't bother leaving the bungalows. Order the twilight feast and soak in every aspect of the resort. Melissa points out that hanging chairs on the deck were one of her favorite elements. Marissa points out that even the soap is a higher line than standard DVC rooms – it's the “bougie line.” Debbie believes the fireworks from the deck cannot be beaten.

Marissa points out that now is actually a great time to buy a Polynesian contract on the resale market. Direct pricing is $235 a point. There is a huge inventory on the market of Polynesian contracts, and they're listing from $140 to $150 a point. You can follow up with her at DVC Resale Market.

Melissa can be reached in the My DVC Points Community Group on Facebook.

Debbie can be reached at Vacation Club Loans.

Note: We didn't intend this episode to be an infomercial for our sponsors. It just worked out that I was in dire need of people who stayed at the bungalows, and my sponsors happened to have stayed there and agreed to join the show. I'm very fortunate to have sponsors who are active members of the DVC community and help produce great content!