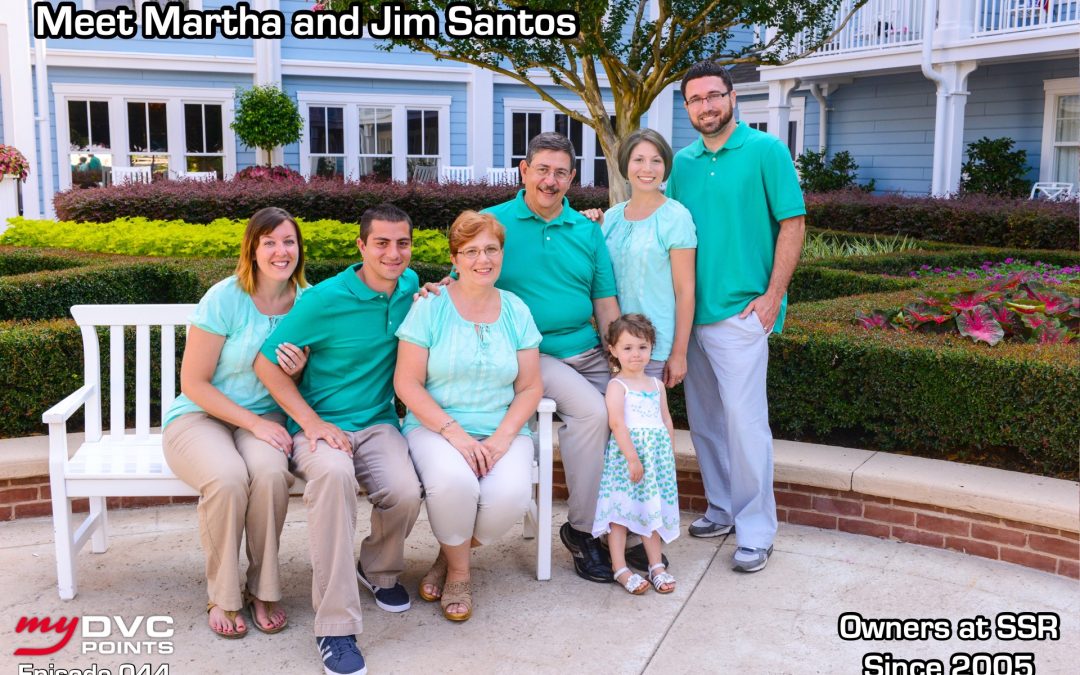 James (Jim) and Martha joined Disney Vacation Club in 2005 by purchasing a contract at Saratoga Springs Resort and Spa. In this episode, we follow them through 15 years of membership. Everything from bringing their kids to Disney, coming with their children's spouses, having adult children and traveling with other couples, and now planning a multi-generational trip. Join the conversation as Jim and Martha share 15 years worth of experience with the My DVC Points community.

Originally, James and Martha purchased 210 points direct and then added on via the resale market. James explains that their initial use year is February; however, they bought an October Use Year contract in the resale market. Owning different use years created a lot of issues in transferring points. The couple typically comes to Disney once a year with an occasional weekend trip. They sold the October contract and found another resale contract with the same use year. However, like most DVC families, they wish they had another 50 points.

The Santos family Disney journey dates back to when Martha worked for Chase bank. Due to the partnership with Disney, the Santos first vacationed in Walt Disney World using a Chase employee exclusive package deal. This trip piqued their interest in Disney back in 1986 and 1991. Back in those days, families couldn't spend an entire week at Disney. James and Martha ended up spending time at Sea World. On subsequent trips, the Santos investigated DVC multiple times.

James explains on the 2005 trip, when the couple left the house, they were reasonably sure they would be joining on that trip. James was ready to become members; however, Martha did most of the family's budgeting. James recalls that time in the sale meeting when the guide left them alone to discuss. Although they didn't have grandchildren at the time; James rationed that they could take their future grandchildren to Disney with this contract. At that time, Martha joined in. It's been 15 years, and the couple thinks joining DVC was one of their best decisions ever. Like most happy DVC members, their only regret was they didn't do it sooner.

Jim and Martha's extended family includes a son and daughter. Both of their children are married, and they have three small grandchildren. They're saving points and planning on coming to a week-long vacation in Grand Villas. They're planning on two nights at the Animal Kingdom and the rest of the time at Bay Lake Tower. We all agreed this is the ideal stay for a trip with smaller children. This way you get the Animals and a short stroll to the Magic Kingdom.

Thus far, the Santos have stayed at Beach Club, Boardwalk, Aulani, Hilton Head, and Vero Beach. If they're not using DVC points, their favorite resort is Port Orleans French Quarter. Beignets! Enough said. James's ideal DVC property has recently shifted from Beach Club to Bay Lake Tower. Martha agreed that Bay Lake Tower has taken over as the family favorite. Given they are from upstate New York, Saratoga Springs is their least favorite DVC resort. Jame loves the walk to the Magic Kingdom and each access to Top of the World. They haven't done anything at Wilderness Lodge nor stayed at the Polynesian resort yet. Throughout their membership, the Santos have vacationed in a wide variety of accommodations. They have so much variety; they don't have a typical room size. Studios, one-bedrooms, two bedrooms, and even a couple of trips to the Treehouse Villas at Saratoga Springs. James is the planner in the family. He is very diligent about taking advantage of the 7-month, 180-day, and 60-days windows at WDW the second they become available. James explains he plans all the vacations, and Martha handles all the family finances.

Jame and Martha are both retired teachers. When we recorded the episode, they had just booked their first trip in retirement for the September Food and Wine festival. For teacher families, getting to use your points in off-peak times is truly something to celebrate!

When they bought into DVC, they received 95 developer points and used them for a concierge collection resort in Vermont. James pointed out that concierge collection and cruises are not the best use of DVC points. However, these were use-or-loose, and they weren't planning on a trip to Disney before they expired; so they booked something closer to home. Another tip was buying an Annual Pass and timing it so that you get to use two years of points on one Annual Pass. James warns, having an AP will lead to extra trips to Disney. It's so easy to rationalize another trip when your park passes and rooms are prepaid. James also pointed out that by listening to the podcast; he is now a fan of getting Travelex trip insurance through DVC.

James and Martha discuss one of the significant benefits of being a DVC member. You come to WDW with an abundance mentality. You no longer feel like you have to do everything every trip. Having DVC eliminates FOMO (the fear of missing out).

In regards to staying at Treehouse Villas at Saratoga Springs, Jim and Martha believe they are great for families with small children. They're technically a three-bedroom; however, practically, they should be considered two-bedrooms because one room only has two bunk beds. Their point costs are similar to a two-bedroom Savanah view as well. Chad pointed out that his kids argue for rights to the top bunk; James pointed out that as your kids' age, the bunk beds become much less attractive. They also point out that having a car is a necessity. It took them over two hours to get from the Treehouses to the Contemporary.

If Tinkerbell were to give them 2000 one use points, Martha would travel the globe and visit all of the Asian Disney parks. Jim would figure out how to plan a trip and bring as many friends and family as the points would allow.