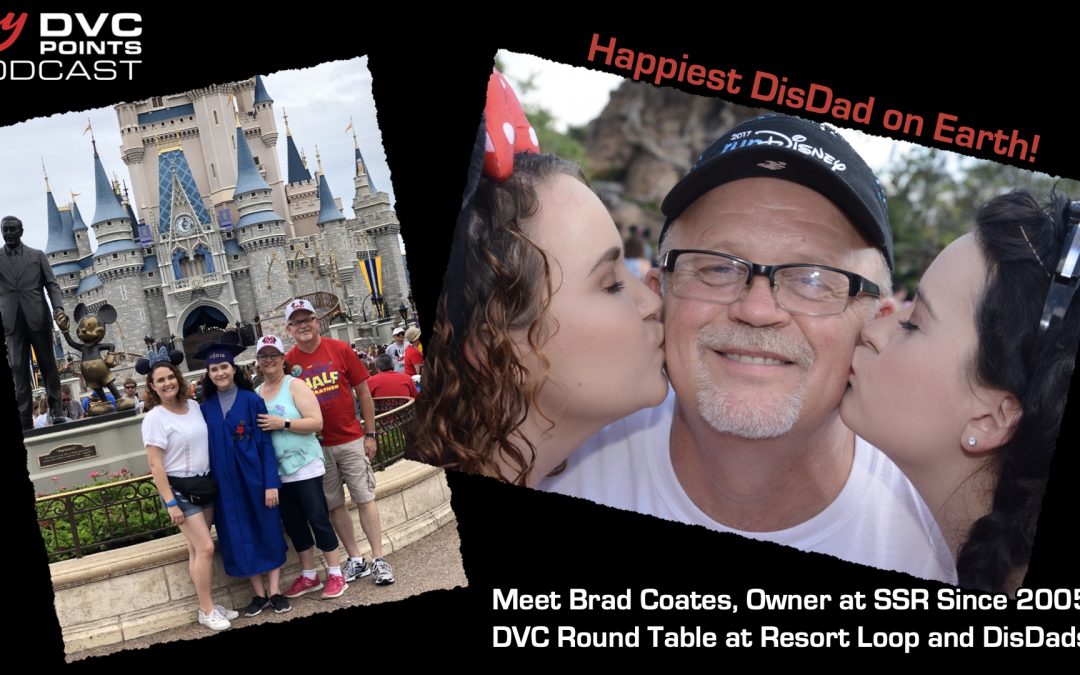 Brad started his Disney journey when his mother took him to Disney for his high school graduation trip. Honestly, he wasn't a huge fan. Years later, while working in LA as a youth pastor, Brad regularly chaperoned church youth outings at Disneyland. He points out, there's nothing magical about the place when you're responsible for a bunch of teens and tweens.

However, things changed when his second daughter PJ was a baby. His mother-in-law wanted to take a family trip to Disney. Reluctantly, Brad agreed, and it became a pivotal moment in his Disney journey. More specifically, at a character meet and greet when Minnie held his 2-month old in her arms and spent way more time than usual holding her and playing after her. After about five minutes, other people in line were beyond the cuteness of Minnie holding a newborn and wanted to get the line moving. However, Minnie wanted more time with baby PJ. The entire family followed Minnie's holding baby PJ into Minnie's house. She spends another 15-20 minutes holding PJ on the plastic couch in Minnie's house. The full force of the Disney magic came over Brad and his wife. They ended up sobbing with tears of joy. Later that day, Brad turns to his wife and explains, as a youth pastor, money is tight. However, being in ministry is hard on the pastor's family. Brad made a commitment to finding a way to take his family to Disney every year going forward. Brad is thrilled to state that PJ has just turned 20 and has enjoyed a magical Disney vacation at least once a year every year of her life. He credits owning DVC as making it affordable. Brad jokes that his oldest daughter is getting married and has concerns about being able to sustain the annual Disney every year. She's looking at him like, well, you have these DVC points!

After 6 years of figuring out how to do Disney on the cheap, in 2005, Brad decided to splurge and stay at Paradise Pier Resort at Disneyland. Before 2005, they drove an RV to park outside Disneyland, stayed in cheap hotels off-property, and did the best they could do with a limited budget. (Pastors are one of most underpaid professions). However, in 2005, they decided to sit through a DVC presentation to get the fast passes. Now here's the unique part of the story. Brad had already owned two timeshares before and hated them. He had a lot of trouble getting out of his traditional timeshares. He fell into that trap not just once, but twice. However, the DVC guide was different. The guide answered all the questions and explained DVC in a non-pressure fashion. Two months later, Brad and his wife realize they had already made a commitment to their family to go on a Disney vacation at least once a year. The couple learned a valuable lesson in the other timeshares. Only buy where you really want to stay. They knew they wanted to keep going to Disney, but in all honesty, they had never been to Walt Disney World before joining. The Coates family became DVC members by buying 200 points at Saratoga Springs at about $75 or $77 a point, plus he also had an extra set of developer points. Brad pointed out the traditional wisdom that you will see a return on investment on your DVC contract within 8-10 years. By his own math and records, he figures that his DVC contract paid for itself within 7 years. Like many members, Brad cites DVC as allowing him to stay in some of the best resorts Disney has to offer that would have otherwise been unobtainable.

One of the first things they did as new members took all the developer points and booked a Disney cruise. Now that Brad is an experienced and more educated member, he realizes that using points in the Disney cruise is less than optimal use of points. Brad also points out that he bought into DVC intending to visit Disneyland more. However, that's really hard to do unless you own at Grand Californian.

Another memorable trip was when his oldest daughter graduated from high school. She wanted to go to Aulani. Brad put on his planning hat and committed to making this dream trip a reality. While it took plenty of research, they found how to stretch their vacation dollars. Cooking in the DVC villa helped stretch the grocery budget. Brad ranks this as one of his favorite Disney trips and considers Aulani a Disney Cruise on land. We will have him back to do an Aulani resort review.

Brad's favorite resort is Disney's Animal Kingdom at Kidani Village. He loves walking into the lobby and being transported to Africa. While he considers him a member of #TeamKidani, he's also an aficionado of the club level rooms over at Jambo House. We both agree that the Kidani pool is much more beautiful than the big pool with a boring slide at Jambo. He added on a 50 point contract via resale at Animal Kingdom just to get access to the club and value rooms. (Both places sell out within seconds of the opening at eleven months.)

One of the pro-tips that Brad uses is renting out his points and paying cash for cruises or other Disney experiences. He recommends using a reputable rental company.

While he has been a Saratoga Springs owner for 15 years, up until a recent trip, his family had only stayed 1 night in the prior 13 years. They always find a way to change resorts at 7 months.

Another benefit of staying in DVC is that people seem a little bit more relaxed on vacation. We discuss that seasoned DVC members have an abundance mentality. Whereas, the families that only get come every 3-5 years have a rope-drop to park close mindset of must do it all. With DVC, we know we're coming back. If we don't get it this trip, we can do it next time, which may just be a few months away.

Brad's wife lost a lot of weight and decided to enter a runDisney event as motivation to stay fit and live a healthy lifestyle. Now, it's a tradition for them to train together. They're doing a land-and-sea run in January. 10k at WDW and followed up by a 5k on Castaway Cay. Their first year, they met the sweeper due to a heatwave that hit LA. At 4 AM in the morning, before the race started, it was already 90 degrees in LA. However, they had a pact that stated if one person cannot finish, the other would continue on. So Brad ended up finishing the race. Here's the photo where they both finished half-marathon at Walt Disney World.

In this episode, Brad and Chad discuss two money-saving tips. One is buying your Spirit Airline tickets at the counter to eliminate some optional costs. (Close to $50 a person on a round-trip ticket). The other is buying discounted gift cards and stacking it with a cashback credit card.

In terms of DVC bucket lists, there really hasn't been a rare unicorn room stay that has completed evaded his 7-month window. The club level rooms at Jambo are the rare unicorn Brad chases. However, he really wants to save up points for a few years and stay a night or two in the bungalows at Poly. He also cited Episode 033 with Derek DoBoers and Melissa from DVC Resale Market. Derek has added a stay at Vero Beach to his DVC bucket list.

If Tinkerbell were to put 2000 one time use points inside his account that could be booked for absolutely anything in the DVC system, Brad designed the ultimate trip and flexed his Disney planning muscles! He's going to rent 500 points to get cash to pay for the airfare, park tickets, food, and Mickey bars. In March, Brad is spending 7 nights in the Toyko Disneyland Hotel. He's staying at the very best room you can book with DVC points for 7 nights at 639 points in a place that looks straight down Main Street. The next stop on the Coates' magical journey will be Hong Kong. They are staying 5 nights in the very best room you can book with DVC points. From there, he's flying to Aulani and staying 5 nights in a 1 Bedroom ocean view villa. But wait, there's more. From Aulani, Brad is flying home to LA to spend 3 days on a Southern California Adventure's by Disney excursion to check an item off his wife's bucket list. The showcase showdown cost for this trip is 1793 DVC points and comes with about $7,000 cash from point rentals. For the record, Brad wins the award for the best-planned trip using Tinkerbell's magical points.

The My DVC Points Patreon's Producer's Club wants to know, “What is your best DVC power user tip?” Brad highly recommends a split-stay on longer trips. This allows you multiple chances to book rooms at the 7-month window and enables an entirely different resort experience. As a point stretching technique, he suggests booking a studio for one part and a one-bedroom or two-bedroom for the next leg of the trip. By changing room size when you do a split stay, it allows for more elbow room at the end of the journey and also gives you access to a washer and dryer in your room.

On one of his Disney adventures, Brad became friends with a member of Club 33 in Disneyland. He's been able to visit 33 three times. When his oldest daughter graduated from college, she wanted to visit Disneyland and take her fiance to Disney on the family trip so that they could visit Club 33. On the way to the club, they came across Mickey on Mainstreet. Mickey saw the eldest daughter wearing an engagement ring. However, his youngest daughter, PJ, wasn't wearing any rings. At that time, Mickey dropped to one knee and proposed to PJ. Brad jokes, he taught his daughter to marry a wealthy man, and now he's set for life with Mickey as a son-in-law.

Brad's advice to new people. Buy as many points as you can reasonably afford.

You can find Brad on Facebook at Fairytale Journeys by Brad. (In case you couldn't tell from the Tinkerbell question, Brad is an expert at planning out magical vacations. You can connect with his facebook page or follow him on Twitter. 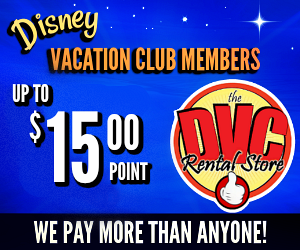