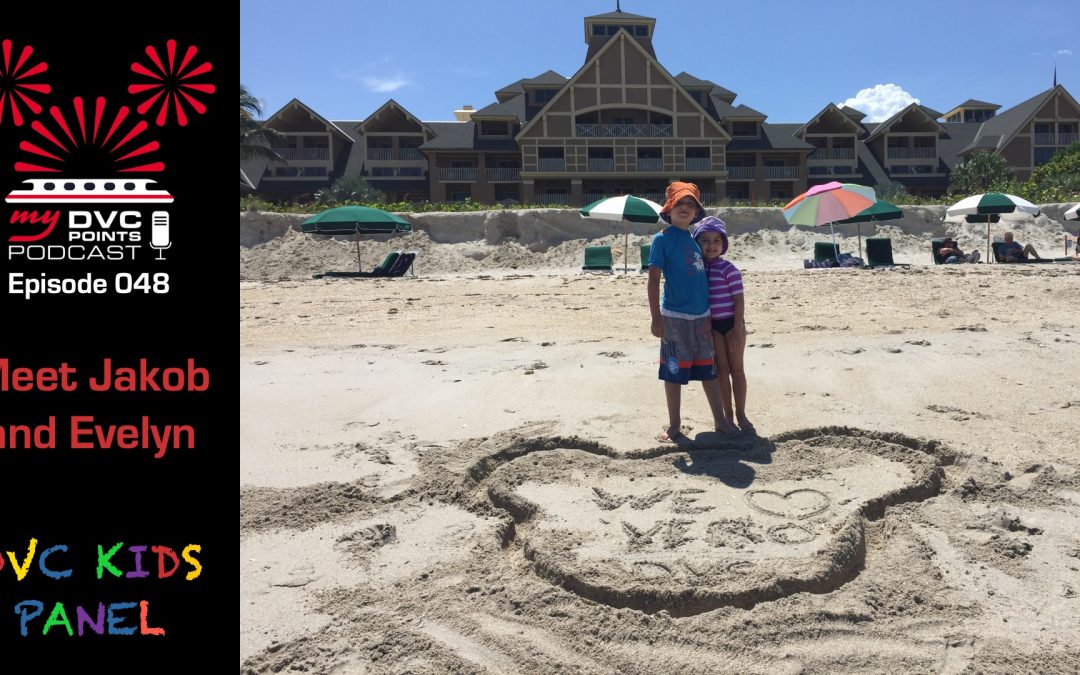 Sometimes you need to step back and take in Disney through the eyes of a child. In episode 048, we gain this perspective from Jakob and Evelyn. We're trying something completely new, and it may evolve into an ongoing series or podcast: DVC Kids Panel. Laura Pennycuff hosts her first episode with special guests Jakob (5th grade, age 10) and Evelyn (3rd grade, age 8) from Montreal, Canada. Their family joined DVC in 2016 as owners at Disney's Polynesian Villas and Bungalows. It wasn't long before addonitis struck, and now they're owners at Disney's Vero Beach Resort.

Spoiler Alert: This brother-sister combo will warm your heart and educate you about Disney and DVC at the same time!

Jakob thinks this is a hard question because they're all his favorite resort for various reasons. The kid's dinner program at Vero Beach ranks high on his list. He also loves Disney's Hilton Head resort. Jakob comments about the gradual decline of the ocean at the Hilton Head beach. He loves walking out into the sea with his dad; they walk a long way into the sea, and the water is only waist-high.

Evelyn cites Mickey Bars as a favorite snack, but things it's a hard question because they're all so good. They attended exclusive parties at EPCOT and Animal Kingdom that included free Mickey bars. Jakob is confident he could eat five Mickey bars if his parents let him. The kids also have fabulous taste in Dole Whips as they are fans of the pure dole whips. The kids also give high praise to shaved ice at the beach house on Hilton Head Island.

Jakob and Evelyn love Flight of Passage. Both love having a FastPass+ for the ride, but they would wait a few hours if necessary. They also really enjoy riding Everest at the Animal Kingdom. Laura confessed she gets a little bit scared when the rollercoaster goes backward. However, our kid's panel pointed out that it's better at night due to the projects you see on the ride. They love riding it multiple times at night when the coaster is virtually walk-on. Jakob points out the Yeti can be a little scary at night when you think he's going to grab you.

Thus far, the Pennycuff family hasn't had the opportunity to visit Hilton Head or Vero Beach resorts. Jakob and Evenly bring us up to speed about the pools at Hilton Head and Vero. At Hilton Head, the larger pool is at the resort. The beach house has a pool shaped like a letter H. Jakob points out that the beach house is really cool and has models of the Disney cruise ships inside. Evelyn points out there is even a baby crib in the beach house just in case your baby needs to take a nap at the beach house. They love the twisting water slide at Vero Beach. Evelyn let us know that at Vero Beach, the cast members hold time water slides races. Neither Jakob of Evelyn has won; however, Jakob's best time is 8 seconds. Laura likes typically to read a book at the pool; however, she will be sure to try out this event when we're there.

Jakob awards Space Mountain and Everest are his top two rides. Flight of Passage comes in a close third. Evelyn ranks them as Everest, Slinky Dog Coaster, and then Flight of Passage. Jakob LOVES Stich! When we were recording, he set his name to Jakob 626 as a reference to Stitch. Evelyn's favorite characters are Baymax and Angel from the Lilo and Stitch series. They have matching stuffed animals. Jakob was able to take drawing classes at the Art of Animation resort, where he learned to draw Stitch.

Jakob's favorite Disney memory is when Pluto tried to eat his head at the Polynesian resort. Evelyn's favorite memory was watching Pluto eating her brother's head.

If Jakob could be a cast member, he would want to be somebody who works in the parks. Laura wants to be the person at Peter Pan's Flight, who sprinkles pixie dust on the bar and makes it close. Evelyn wants to be a character attendant so she can walk the characters through the park. She really wants to walk with the Stormtroopers.

Jakob really likes to bring friends to DVC with them. They've brought life-long friends, aunts, uncles, and their grandparents. They've driven down from Montreal multiple times. Jakob considers 50's Prime Time Cafe, a must-do every trip restaurant. He likes the old-time aspect of the restaurant and that they pick on you. Evelyn really likes the bon voyage breakfast at Trattoria Al Forno on Boardwalk.

Jakob really likes talking to cast members at the park. He was talking with a cast member at Walt's Enchanted Tiki Room, and the cast member had them wake up Jose to start the show. Evelyn's favorite cast member named Blue at Hilton Head. Blue does magic tricks at the resort.