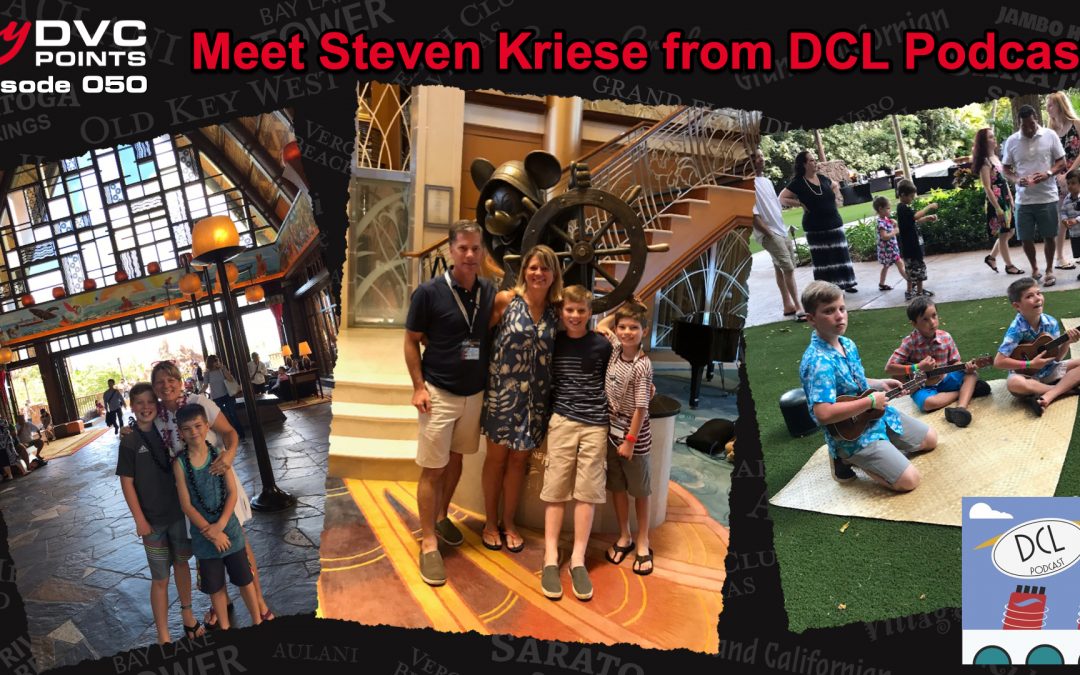 Steven Kriese, co-host of the DCL Podcast, joins us on Episode 050 of the My DVC Points Podcast. His family has been DVC members since 2013 and they own at Aulani and Copper Creek.

Interestingly, however, the Kriesse's first exposure to DVC was from a trip to Aulani before the DVC units were even built! He and his wife are still kicking themselves for not having purchased back then, as it would've qualified them for subsidized dues! Steve explains his family's love for Hawaii. His parents live there for half the year, and flights from the west coast of the US are frequent and shorter than traveling to Walt Disney World. Both he and his wife work for Alaskan Airlines – he's a pilot, and she's a flight attendant. As a consequence, Steve's family had often vacationed in Hawaii, discovering Ko'Olina before Aulani had even been built. The Ko'Olina tranquil lagoons were of particular interest to them when the kids were younger.

For Steve and his family, DVC isn't about traveling to the Parks. In fact, their kids have only been to WDW once, although they do visit Disneyland more frequently. They have even won the DVC lottery and found availability at the Grand Californian! For their family, DVC is more about Disney's exceptional level of service, quality accommodations, and about getting them back to Aulani time and time again. They love being Aulani owners; however, they picked up a small contract at Copper Creek just to be able to book runDisney weekends at the 11-month mark.

Usually, their family tries to stay in Studios, Hotel Rooms, and One Bedroom at Aulani. They prefer the hotel rooms at Aulani because of lower points, two beds, and they really do not need the couch. The family spends very little time in the room and most of their time at the pools, beach, and resort activities.

The most recent case of addonitis struck because Steve and his wife have become Run Disney aficionados. Booking anything at Walt Disney World for Race weekends became difficult without an 11-month window. Their Copper Creek contract was purchased to solve this problem.

The Disney instigator in the family is definitely Steve's wife! Growing up in SoCal, she spent her childhood visiting Disneyland. The other regulars in his travel party are his two boys, who are 13 and 9 years old, as well as his parents. In fact, Steve's parents can be blamed for starting his love affair with the Disney Cruise Line. Wanting to take a cruise to Alaska as part of their bucket list, and wanting Steve's family to join. Steve's wife insisted on a Disney Cruise so that their boys would be free just to be kids, rather than being shushed all the time on another cruise line!

Steve directs the conversation towards Dole Whips and then breaks the news that Dole Whips aren't in the standard offerings on the ship; however, he has not sailed on the Dream before. This leads Chad to challenge the use of the word “Disney” to describe the ship if they do not have Dole Whips! Steve promised to speak with the leadership to address the situation before our August sail date.

Tip for maximizing your DVC:

Steve and His Family Have Stayed at:

Both Steve and Chad's families will be on the same Disney Dream cruise August 10th to 14th in 2020. We welcome families to join us for a drink!

Tinkerbell Points: Travel outside the US to visit Tokyo Disneyland and Disney Sea, staying in the largest room possible at Disneyland Hotel in Tokoyo that overlooks Mainstreet

How has vacationing changed for your family since buying DVC?

Advice for people about DCL:

How to Connect with Stephen:

If you enjoy the show, please consider buying Chad a dole whip and joining the VIP Producer's Club. Your support allows us to produce a weekly podcast and a weekly live show. Patreon's receive a bonus episode once a month diving a little bit deeper into ways to make the most of your membership.