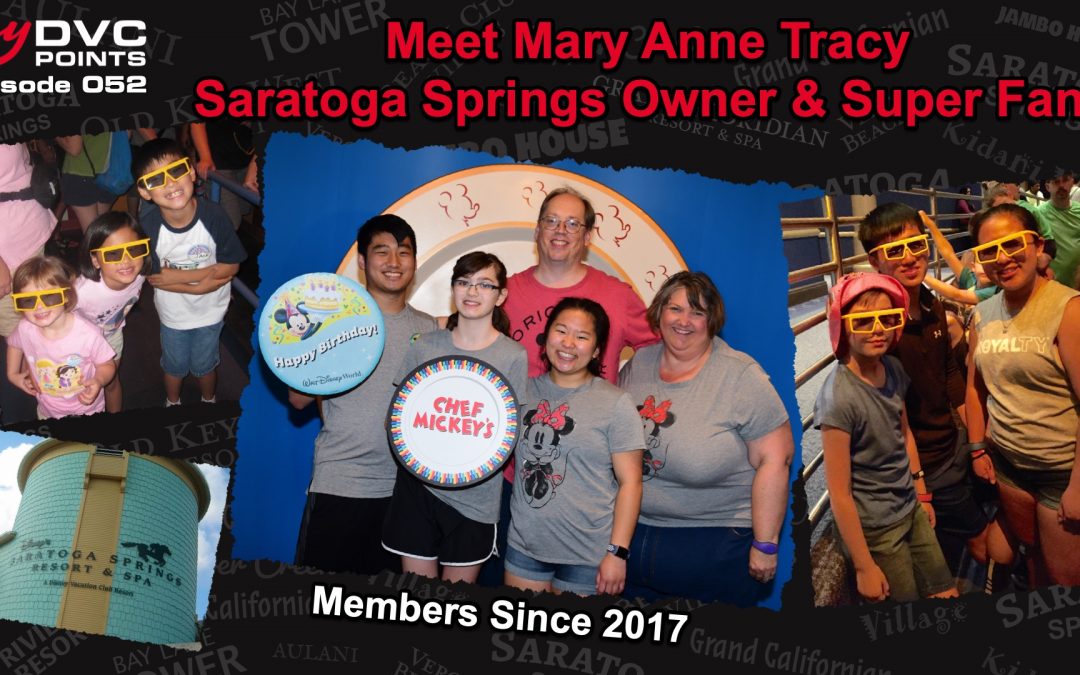 Mary Anne confesses in the show; she's such a fan of SSR, that once she canceled a Friday and Saturday night at the Beach Club Villas to return to their home resort. Her entire family loves the resort. To their family, SSR is truely their home resort. The love how the Paddock and High Rock Pools are rarely ever busy. They love the big comfortable sofa in the community hall. Disney Springs is a short walk away, is a huge plus as the family likes to have a casual meal over at Chicken Guy or see a movie on vacation at AMC. Her family loves the “fun-team,” more commonly known as the recreation team at Saratoga Springs.

According to her husband, they tour the park like a military incursion. Mary Anne has a plan that ensures they are one of the first families in the park and get full advantage of rope dropping multiple attractions. Mary Anne and the youngest typically have annual passes, while her husband and older two children like spending time at the “other park” across town. However, Mary Anne usually buys the park hoppers for the family members, not using an annual pass. Their family also loves the hard ticketed limited-access parties. Disney After Dark, Villians, Mickey's Not So Scary, etc.

“B1 Baby” – a Tracy Family Tradition

Mary Anne explains soaring is one of their family's favorite rides. When they approach the loading zone at Soarin', her daughter approaches the cast member smiling with an energetic “B1 Baby!” seating request. The cast member chuckles at her energy and originality in making a seating request and has them step aside so that they can get the best seats in the house for the Soarin' attraction. Section B – Row 1 or as Chad calls it, top row center. When you're in the top row, you don't see other people's feet dangling down and ruining the immersion of the attraction. When you're in the center, the Eiffel Tower stays straight. However, when viewed from off-center, the optics of projecting an image on the dome-shaped screen will bend the tower.

The Tracy family joined DVC in the fall of 2017. Before joining DVC, they paid cash for rooms. According to Mary Anne, they were spending way too much on Disney resort accommodations. However, there's more to the story here. When Mary Anne was growing up, her father would only go places where they had relatives in the area so that they could save money and see their family at the same time. After a few trips to Disneyland, Mary Anne vowed that when she grew up, she was taking her family to Disney and staying on property. Shortly after her father passed, Mary Anne's mother decided to take the family to Disney World, but Mary Anne insisted they stay on property. They ended up staying at Port Orleans French Quarter. Seven years later, her mom wanted to go back and spend time at WDW after a cruise. Her mom first suggested staying at the All-Stars resorts. After more thought, mom took some pointers from ladies in her bridge club, and they ended up at the Polynesian. Mom was paying for the trip; however, they ended up paying full rack rate at the Polynesian during the peak Christmas holiday season.

Mary Anne is quick to point out that she's married to one of the most frugal men on the planet. On the third family trip to Disney, Mary Anne's brother-in-law offers the use of their timeshare in Orlando. This vacation set a new standard for the children. It was the kid's first vacation in a two-bedroom villa that offered multiple rooms, kitchen, and dining areas. The kids loved timeshare style vacations. However, there was a problem. Mary Anne had grown accustomed to getting fast passes at the 60-day window for the entire trip. However, she knew if she went to the DVC presentation, she would get extra fast passes. So sitting through the DVC presentation was the very first vacation agenda item. Her youngest daughter Katie loved the playground. The older two kids fell in love with the pool and recreation areas. It almost sounds like SSR was love at first sight for the entire family. During the I'm-going-to-leave-you-alone-with-your-spouse to discuss phase of the DVC presentation. Mary Anne pointed out that what the family paid for their rooms at the Polynesian resort last Christmas was roughly the same cost as the minimum buy-in at Saratoga Springs. Tom looked at her and said, if you want to keep coming back, this is almost a no-brainer. (For the record, Saratoga Springs always ranks as one of the best economical buys in DVC). Tom also added some clauses to the agreement, such as the ‘ole we will still go other places bit and the-we-can-rent-out-the-points-if-need-arises bit.

Mary Anne did not buy at the presentation. Instead, they went home and researched a bit more. Mary Anne contacted Derek at DVC Resale Market and purchased a 160 point resale contract. She can't speak highly enough about her experience with DVC Resale Market. Derek continued answering her questions even after the resale documents were signed. However, addonitis hit, and they ended up buying 100 direct points to expand their contracts. When a direct guide didn't have matching Use Year points in stock when she wanted an add-on, the guide suggested another Use Year. However, Derek confirmed that she really would be better off adding points from the same resort and same use year to her contract.

While Mary Anne loves her home resort of Saratoga Springs, she does want to venture out to Bay Lake Tower and the BoardWalk resort. They are considering Disney's Animal Kingdom for their next trip; however, they aren't in the 7-month window yet. They want to go to Aulani at some time as well.

Mary Anne's best tip for new members is in 100% alignment with our show. Take the time to research and educate yourself so that you can make the best possible decision for your family. On this show, we're huge fans of the Disney Vacation Club. Everybody does Disney differently. We love resale. We love direct benefits. We love every single DVC resort built and think they all offer something of value to the DVC community.

DVC Resale Market sponsors our shows; however, to the best of our knowledge Mary Anne is not sponsored but is very vocal about her support for Derek, Marissa, and the entire team at DVC Resale Market. She's supportive because the team has served her with excellence. This reputation of excellence is why we choose to partner with them.

If she had it to do all over again, Mary Anne would have structured her contracts a little bit differently. She owns three contracts all at Saratoga Springs. They are the same use year, which Mary Anne would not change. However, she wishes she had three 100 point contracts because she has three children. She currently has a 160 resale, 50 direct, and 50 direct. There isn't a fair way to leave these contracts to her children. One will get over 300% more points but will not get direct-member benefits. The other two will get smaller DVC contracts with direct-member benefits.

If you enjoy the show, please consider buying Chad a dole whip and joining the VIP Producer's Club. Your support allows us to produce a weekly podcast and a weekly live show. Patreon's receive a bonus episode once a month diving a little bit deeper into ways to make the most of your membership.