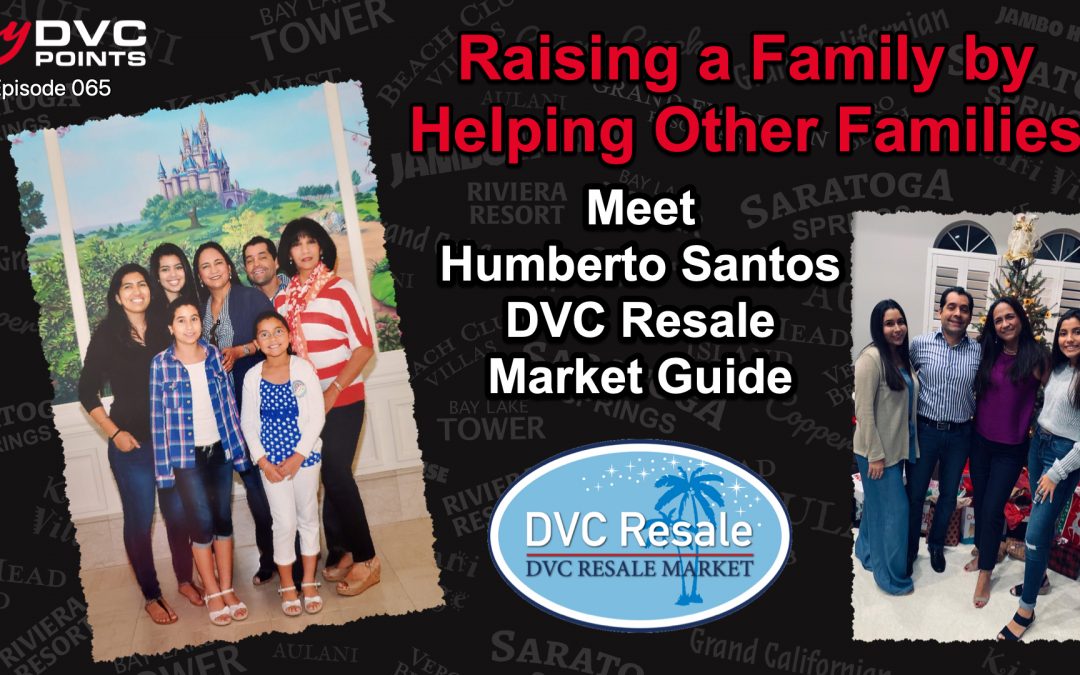 Humberto Santos from DVC Resale Market shares his experience helping families create vacation memories as a Vacation Guide for Disney Vacation Club, how his transition to the team at DVC Resale Market helped him put family first, and why he believes excellent customer service is key!

When Humberto was living in Miami, his cousin invited him up to a timeshare presentation that he was hosting. When Humberto went to the presentation, he thought that selling timeshares was not his calling because he wasn’t sold on how the typical timeshares worked. While still in Orlando, he stopped by a Disney Vacation Club kiosk at the Walt Disney World Village and talked with the Cast Member. In the course of their conversation, the Cast Member invited Humberto to join the DVC team, based on his upbeat persona and the fact that he could speak Spanish, Portuguese, and French.

“What I did at Disney was, basically sell vacations. Vacations you create memories. Memories you keep. You look back at the pictures and that’s what it’s all about.”

Humberto joined the DVC team as an ASA Cast Member, (the ones we see at kiosks throughout Walt Disney World). In 18 months, Humberto was promoted to a DVC Guide, which was a very short time period compared to his colleagues. He began selling DVC as Disney’s BoardWalk Villas were opening, was one of the first Guides on the Disney Cruise Line (Magic), and helped 2,500 families become Disney Vacation Club members. Humberto was often approached by some of his members and their families in the parks, which he said was always a great experience.

He recalls one very special meeting with a prospective member, who returned to the Preview Center 18 months after visiting with his wife. His three daughters were in the kids’ play area, and he told Humberto he was ready to buy today. Humberto thought his wife was in the ladies’ room, so he said he would wait to start the meeting until she could join them. The man told Humberto that his wife had died of cancer three months earlier and that he promised his daughters he would bring them to Disney World and buy into DVC. Humberto thought about going home and embracing his own family during their entire meeting.

Another member from Michigan approached Humberto to help him purchase a contract as a “kid sucker.” His three children were all grown, with families of their own, and living in different parts of the country. He rationalized buying DVC as a way to get his kids and grandkids to make time for vacations with him, because if he was paying they would show up!

Humberto is thankful for his 20 years with Disney Vacation Club, as it allowed him to raise three daughters as a single dad, support his wife through her professional education (she has her own dental practice now), and create memories for his family. Disney also taught him to make vacations with his family a priority, so he takes vacations “religiously.”

During his time with Disney, Humberto had the opportunity to propose to his wife in a very special way. He had the staff at California Grill bring out her ring with their dessert! She was a little too focused on the fireworks to notice the ring at first but was pleasantly surprised once he pointed it out. They recently celebrated their 20th wedding anniversary!

His fondest memories are of riding the surrey bikes on the BoardWalk and attending Food & Wine with his wife and daughters. His daughters also had the good fortune of school field trips in the parks, which he chaperoned quite a few times! Watching his children grow up through those moments at Disney has been very special to him.

Three-and-a-half years ago, Humberto wanted more time with his family and a bit of a break from the hustle and bustle of working with Disney. He recalls missing birthdays and soccer games, due to being on 10 to 12 cruises per year for seven years, and admits “I wasn’t proud of that.”

Nick approached Humberto with an offer to join the team at DVC Resale Market, with the promise of a Monday through Friday schedule that would allow Humberto more time with his family. Humberto resigned from Disney and joined DVC Resale Market two weeks later!

Now, Humberto is still able to help families become DVC members without sacrificing time with his family. He still answers the phone for prospective members during his daughter’s volleyball tournaments but is lucky to have clients who ask him to call back when he has time. He notes, “Disney people are family-oriented, so people understand family comes first.”

Humberto’s motto has always been, “I treat guests like I would want to be treated.” He invites clients who purchase contracts from him to reach out at any time, even if it’s just to ask a question they may have gone to Member Services to get the answer. He prefers phone calls over emails, as he feels he is better able to help the guest through a conversation than through electronic messages.

“I’m not here to outsell anybody. My job is to be as real as I can, to be as honest as I can, and to be here for the guest as much as I possibly can. The rest will take care of itself.”

Why Do People Sell Their DVC Contracts?

Humberto is very empathetic to members who come to him to sell their contracts, as he knows that life happens. He understands that people cannot foresee college costs for their kids, going through a divorce, falling ill, becoming disabled, or just losing interest in Disney vacations so he maintains a high level of compassion when helping members sell their contracts. Humberto once helped a woman whose husband had become quite ill sell her seven contracts, one at a time. He knew it would take longer, but he was focused on making sure she was not overwhelmed or upset in the process of letting go of their DVC contracts.

Where Has Humberto Stayed?

How Can People Maximize Their DVC Membership?

Humberto knows that each guest has a different philosophy when it comes to maximizing their points, but he believes the essentials are learning the point charts and understanding which use year will align with your vacation habits. He also recommends that members buy enough points for a One-Bedroom Villa because they can either book two Studios for that point price or book a One-Bedroom if Studios are sold out.

His advice is for members to do their homework, but to call Member Services (or him) if they have a question about using their membership. He is often able to advise a guest better with a phone conversation!