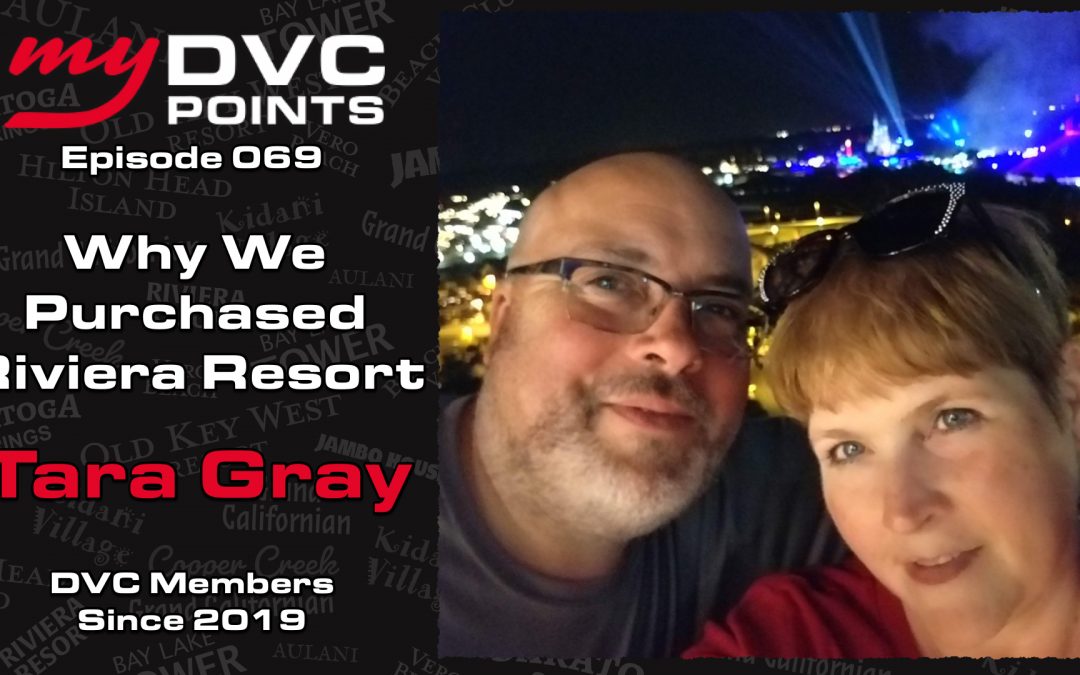 Tara Gray, and her husband Jason, have been visiting Walt Disney World multiple times a year for quite a while, but could never make the leap into becoming Disney Vacation Club members. Disney’s Riviera Resort changed all that! Tara shares with us the reasons that she and Jason are now proud to call the Riviera home: location, transportation options, a 50-year contract, and the new Tower Studios.

Tara on Buying Into DVC

Tara and Jason had been looking at DVC for the last 15 years but were not impressed with any of the resorts in the portfolio enough to purchase. Riviera changed that! This is the couple’s first DVC contract, and there were quite a few unique characteristics of the resort that won them over.

Why Buy at Riviera?

Transportation is one of the most significant factors for Tara and Jason when choosing a Walt Disney World Resort. Tara liked that the Riviera had the option of utilizing the newly-opened Disney Skyliner. According to her, “We did not want to rely on busing to three-quarters, or all, of the parks. The gondola system gives us access to two parks without relying on buses.”

Another huge selling point of Riviera for the couple was its central location on Walt Disney World property. They have stayed at Disney’s Caribbean Beach Resort a few times, primarily due to its proximity to all four parks. Tara says that the Magic Kingdom is still a bit more challenging to get to, but she would prefer being close to three parks than just one (which would be the case if she stayed on the Monorail Loop).

The Tower Studios won Tara and Jason over, as they looked at the renderings of the new resort. The couple does not have any children, and they primarily vacation with just the two of them, so a Tower Studio for two was perfect. They have one booked for a few days in February and are excited to try it out! Tara also liked the look of the Deluxe Studios and loves the fact that they sleep five adults, for when they travel with family. She says that she will probably not book a One-Bedroom Villa anytime soon because those units are “wicked more points.”

Finally, the couple found Riviera’s length of the contract very attractive. Tara loves staying at Disney’s BoardWalk, but she declined to purchase there as the cost was $5 more per point and only has 21 years remaining. She says, “I know everyone is up in arms about the resale thing, etc. But we plan to bequeath it to my niece, so we have no plans of ever selling it. She loves Disney and travels with us.” Tara knows that this plan will allow her niece to enjoy full membership benefits and give her the ability to stay at whatever DVC resort she likes.

What is Tara Looking Forward to at Disney’s Riviera Resort?

Tara is excited to utilize the new Disney Skyliner system to access the International Gateway entrance of Epcot. She does worry a bit that the addition of the new resort and mode of transportation may make this entrance less of a “hidden gem” than it has been in past years.

She also hopes that Disney has carried the elegant touches recently installed in Gran Destino at Coronado Springs into the new Riviera rooms. Tara feels that new DVC resorts like Riviera should receive the same deluxe features as guests in the new tower, like the smart TVs that greet them upon entering the room.

Tara and Jason plan to vacation together and with their families at Disney’s Riviera Resort on many of their holidays, but are open to trying other resorts as well. Tara loves Kidani as an option for a more resort-focused vacation and notes that availability is generally high at this resort. She adds that if addonitis ever hits, they may consider purchasing resale at Bay Lake Tower or a resort with more limited availability.

She also hopes that Disney will carry the idea of the Tower Studios further into new resorts and wishes more were available at the Riviera.

Tara is a member of Disney's Riviera Resort Owners Facebook group by My DVC Points.