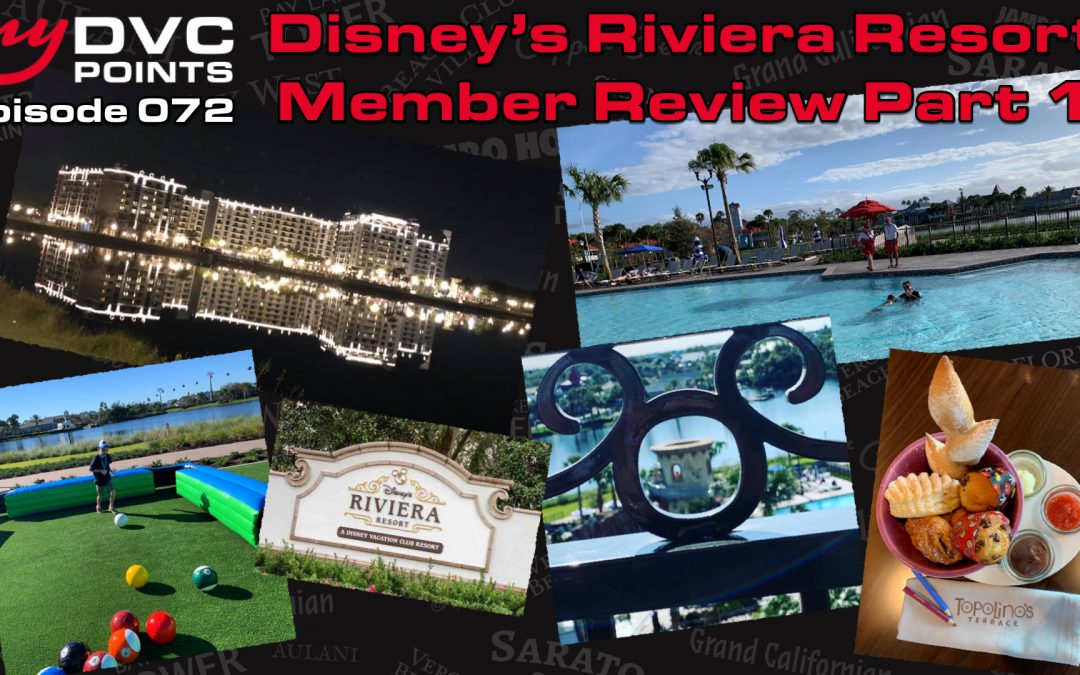 In Episode 072 Chad and 3 DRR owners are coming together to provide a resort review of Disney's Riviera Resort. If you're considering buying into Riviera, this is the episode series you're looking for. In the first half, our experienced members and owners discuss room locations and requests, pools, restaurants, and recreation. This is the fifth episode in a 7 episode series on the Riviera Resort.

Tell Us About Your Stay at Disney's Riviera Resort!

Amy stayed at Riviera from January 5th to 12th in a Standard View Deluxe Studio. She traveled with her husband, Graham, and their 10-year-old son, Nate. Her family found the room to be very spacious, and they had a great view of the Epcot and Magic Kingdom fireworks from their balcony!

Joe stayed at Riviera from December 16th to 18th (opening night) in a Prefered View Deluxe Studio (Room 8555). Joe traveled with his wife, Courtney, and their three children. The family requested and were assigned a high floor room, facing the Disney Skyliner. They had a great view of the Skyliner, Epcot, and Hollywood Studios from their balcony!

Caleb stayed at Riviera from in a Standard View Deluxe Studio (Room 8327). His travel party pushed the maximum occupancy, as he traveled with his wife, Breauna, their six-year-old daughter, Hope, their 15-month-old son, Monroe, and his mother-in-law, Pam. They had a great view of the New Year's Eve fireworks at Epcot and Magic Kingdom, from the comfort of their Murphy bed!

Chad stayed at Riviera from in a Prefered View One-Bedroom Villa, just next to the laundry facilities on the fourth floor. He traveled with his wife, Laura, fourteen-yer old daughter, Reagan, eight-year-old daughter Brynn, and six-year-old son Lincoln. Chad rented out some of his Polynesian points to book a cash room at Riviera, using the 35% discount offered to DVC members. He had initially requested a room on a higher floor but took a room that was available upon his arrival at 1:00 pm so he could do a live room tour in the My DVC Points Community Facebook group during the day. The view from his balcony was of the S'il Vous Play pool area and Disney's Caribbean Beach Resort.

Based on Amy and Caleb's experiences in the Standard View Deluxe Studios, and guest feedback, it is possible that Disney will reclassify the rooms in the future. It seems that the Standard View rooms actually have better views of the surrounding parks and fireworks than the Prefered View rooms!

This data was gathered by Micah Wyss from MousePerks.com and is not officially confirmed by Disney, as not all floors have been declared by Disney Vacation Club.

Impressions of the Lobby of Disney's Riviera Resort

Chad enjoyed a few hours at this lounge with his friend and travel companion, Pat. They ordered several different food and beverage items, including the Portobello Mushroom Burger, Parmesan fries, Grilled Chicken Wings, and Monte Cristo. Chad says the Monte Cristo is nearly identical to Disneyland's famous sandwich! At the beginning of their meal, they mentioned to the bartender that Pat had a dairy allergy, so he brought out a side of fries with no Parmesan without them even asking. According to Chad, this lounge's food is “spot-on!”

Caleb and his wife ordered gelato from this poolside dining location. He says the strawberry and lemon gelato were both delicious, but even better together. The Pennycuff family shared numerous servings. We thought the gelato was good but nothing extraordinary.

Amy's son and husband had fun with a few of the recreation activities. They played Foot Snooker and games on the lawn, such as Jenga, Bocce, Chess, and Connect Four. Her son also enjoyed the Opening Regatta, which allows kids to race RC boats in the pool!

Chad watched Foot Snooker while eating breakfast, but didn't make it down to the lawn in time to join in. He notes that the Bocce court has already taken a bit of a beating, due to the impact of the balls, and thinks a rubber bumper would keep the concrete intact.

Unfortunately for Joe, his family was not able to enjoy a lot of the recreational activities, as their stay was during the opening day media event. A stage for the event occupied much of the lawn, and not all of the games were available.

Chad encourages everyone to head out to the resort's nightly campfire. According to Becca (Cast Member), the resort is serving up a unique, European twist on s'mores – Nutella and scones!

Stay tuned for the second half of our review show to drop in Episode 073!