075 Enjoying DVC as a Local, Family Connections Through Disney, and Eating Gluten-Free at WDW with Shannon Ford, Owner at Saratoga Springs Resort 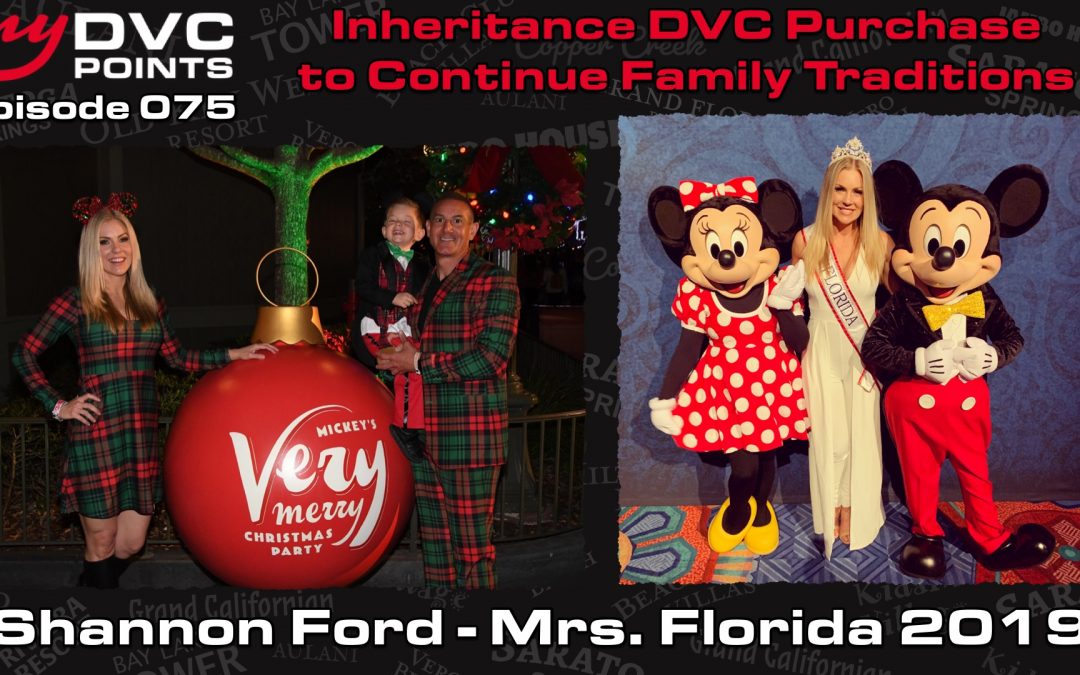 My DVC Points Podcast
075 Enjoying DVC as a Local, Family Connections Through Disney, and Eating Gluten-Free at WDW with Shannon Ford, Owner at Saratoga Springs Resort

Shannon Ford is a woman with many different roles: mom to thrill-seeking toddler Rider, Mrs. Florida 2019, and creator of the blog Disney Days. In this interview, Shannon shares her story of enjoying her DVC contract as a Florida resident, connecting her late father and her son through their love of Disney, and eating gluten-free at Walt Disney World.

Shannon was born and raised in Miami, so trips to Walt Disney World were a big part of her childhood. She remembers driving up to the Magic Kingdom or Epcot for the day, spending a few hours in the park, and then heading home. Sometimes, the family would stay in a hotel near the parks overnight, but Shannon says it never really felt like a vacation. Her dad was a big Epcot fan, and she fondly remembers playing in “old Epcot” with him.

Shannon met her husband Ray in college, and Disney continued to be a part of her life through trips with him. Now they vacation with their son Rider, who Shannon calls their “miracle baby.” Shannon is very candid about her struggles with infertility and IVF, and has made this her platform as Mrs. Florida!

Rider's first Disney vacation was on the Disney Cruise Line for his first birthday! Wanting to make the trip a little more special, the family added on three days in the Cabins at Fort Wilderness before their cruise departure. Shannon calls the full kitchen and living space a “game-changer,” and remembers thinking, “This is how you do Disney!”

While on Rider's first Disney vacation, Shannon met up with an old friend, who mentioned the resale market to her in passing. When Shannon's family returned from their cruise, she got right online and started doing her research.

After reading the blog posts on DVC Resale Market, Shannon felt familiar enough with the product to make an offer on a 250-point contract at Saratoga Springs. Her low-ball offer was countered (for $72/point), and her guide Humberto was wise in telling her that she may never see a deal like this again. Shannon purchased the contract with some of the inheritance her father had left her when he passed away and told Ray about the purchase later.

Shannon recommends purchasing resale contracts in December! Disney is more likely to waive the Right of First Refusal (ROFR) during this time, as they're trying to clear the queue of contracts before the new year.

Ray initially thought Shannon's quick contract purchase was crazy at first, but now he sees the value of being DVC members. Shannon says it has completely changed the way they do Disney, and now their trips to the parks feel more like a vacation. They don't feel disappointed if they don't get to something, because they know they'll be back later. Additionally, they have been able to enjoy more “extras,” like Mickey's Not So Scary Halloween Party and Mickey's Very Merry Christmas Party.

Shannon says this purchase was a great way to honor her dad and connect him to her son through their love of Disney.

The family has stayed at BoardWalk Villas, Beach Club Villas, Animal Kingdom Lodge – Jambo House, Old Key West, Bay Lake Tower, and Boulder Ridge Villas. Shannon says they plan to stay at their home resort in the future, but only when it becomes challenging to book at other resorts.

Ray and Shannon's favorite stay so far was at Old Key West. Shannon said that staying at this resort “felt like a real vacation.” Her family enjoyed recreational activities in the Community Hall, by the pool, and on the playgrounds. She loved the space in the one-bedroom villa and the fact that their car was parked just outside the room.

Rider's favorite resort is BoardWalk. He loves the “creepy clown slide!” Rider's favorite character is Mickey Mouse, and he has been known to introduce himself as Mickey Mouse Rider Ford Quintana. Currently, he loves dressing to match Mickey, and Shannon is soaking up every minute of this cute phase! Now that he is over 40 inches tall, Rider is also a bit of a thrill-seeker. His favorite ride is Tower of Terror! Shannon says he looked absolutely terrified the first time he rode it but asked to ride again as soon as they were done.

On Shannon's DVC Bucket List is a stay at Aulani for her and Ray's ten-year wedding anniversary. She's looking to make this trip in 2020 or early 2021. She also wants to stay at Saratoga Springs once the room renovations are complete.

Shannon was diagnosed with Celiac Disease ten years ago, so she is on a strict gluten-free diet. She says that Disney is amazing at accommodating her dietary needs, and she never has to worry about cross-contamination. The added convenience of being able to order gluten-free through Mobile Order has been a great time-saver for her family's vacations.

Shannon's family has recently become more of a Quick-Service Meal group, especially as her son has gotten older and wants to focus more time on attractions. Their favorite locations are Docking Bay 7 in Hollywood Studios and Sunshine Seasons at Epcot.

On their last trip, Shannon's family dined at Cinderella's Royal Table. She says this meal was much better than when she and her husband ate there before, and she feels the food and character interaction were worth the price. Shannon also loved that Rider allowed her to dress him as Prince Charming and he posed for pictures with the princesses.

Shannon urges members to plan their trips at least two years in advance so that they can budget their points for each stay accordingly.

She recommends that members utilize more economical resorts, as they can book larger accommodations or vacation for longer. Additionally, she suggests that members request a location in the resort that works best for them. For example, she finds it easier to be on the ground floor when traveling with a toddler.

If Tinkerbell were to grant Shannon's family 2,000 one-time use points, she would use them to do a grand tour of DVC. She would want to take three to four weeks to try the DVC resorts in all the different locations – Hilton Head, Vero Beach, Walt Disney World, Disneyland, and Aulani.