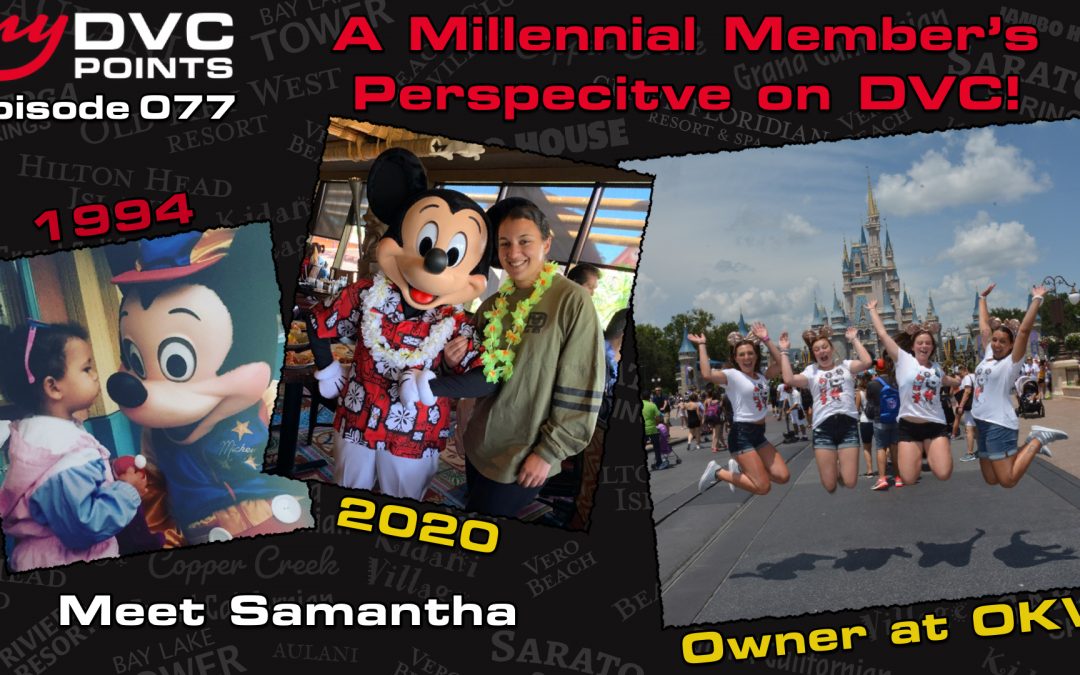 Could you imagine buying into DVC at 25? That's exactly what Samantha Kurtz-Seif did! Samantha is a proud millennial DVC member, one of the My DVC Points VIP Producers, and co-host of My DVC Points Live! In this episode, Samantha talks about growing up Disney, buying into DVC before buying a house, and how she utilizes the “Wait and Stalk” method to get the room she wants.

Samantha was two years old when her family took her on her first trip to Walt Disney World. Even though she doesn't remember much of this vacation, she knows that it's when her love of Disney and the classic attraction “it's a small world” began. According to her mom, she rode the attraction at least a dozen times!

Since that first trip 25 years ago, Samantha and her family have been back to Walt Disney World at least once per year. With approximately 35 trips under her belt, she's a bit of a Disney World expert!

Samantha first became interested in DVC after her family stayed at Saratoga Springs with one of her mom's good friends. This friend has been a DVC member since the early 1990s, as an owner at Disney's BoardWalk Villas. On their second vacation with this friend, Samantha asked her a lot of questions about how DVC worked, what the payments were like for financing, etc. She was still in college, so it was too early for her to buy in, but the seed was planted!

On her first trip to Walt Disney World without her family, Samantha decided to go on a DVC tour. She was there to learn about how DVC worked, but the FastPasses and the gift card were nice perks. After the tour, she still felt that it might be too soon to buy in, so she decided to go home and start the long process of saving towards buying a contract of her own. She still kicks herself for not buying in then!

In January 2018, Samantha went on another Disney World vacation and still found herself thinking about DVC. While packing to go home, she realized that she could have made a decent down payment with the money she had spent on her two most recent trips. A few weeks after that vacation, she did a DVC Phone Tour and had her points by Valentine's Day!

When she bought into DVC at 25, Samantha had already been building some good financial habits. She knew that she could finance her DVC purchase and still save towards her goal of purchasing her own home. She's currently looking into refinancing to see if she can knock some years off her loan payments.

Samantha bought a direct contract at Old Key West for several reasons. First, the contract had 38 years left on it, so she'll be 65 when it expires. Her intention from the beginning was to buy more points at a newer resort, so she can vacation into her 70s and 80s. Second, the price per point and dues were low enough that she could purchase 150 points (initially). Finally, the contract had a few years over Saratoga Springs, which was her second choice.

She thought about resale, but after talking with her mom's friend, she knew direct was the way to go. She wanted the coveted Blue Card and all the perks that came with it. She understands the perks can go away but thinks that benefits like Moonlight Magic are worth every penny!

It didn't take long for Samantha to develop addonitis. While on her first DVC vacation at the Polynesian, she told her cousin that she would be adding on 25 more points for a bit more flexibility. The day after she got home, she called her guide and said, “I'm gonna need more points.”

She's planning to purchase a resale contract in the future – once she pays a little more towards her Old Key West contract. She's got her eye on Bay Lake Tower or Polynesian!

Life As A DVC Member

At the time of recording, Samantha had been on three vacations as a DVC member and has three more booked! She's taken over as the family's vacation planner, but they see “doing Disney” a bit differently now. Samantha still feels like she has to fit in as much of the parks as possible while her family has settled into a more laid-back approach. Now she tries to take time to notice the small details and walks down Main Street, U.S.A. a bit slower.

Samantha usually travels with her parents and little sister, friends, or her cousins. She feels a sense of pride every time she brings someone to Walt Disney World, especially her parents. Before DVC, the family stayed primarily in moderate resorts, and now she gets to give back to her parents by providing them with deluxe accommodations.

At the time of recording, Samantha has stayed at the Polynesian and Old Key West. Her next vacations are Beach Club with her family, Boulder Ridge with her sister, and her first solo trip to Animal Kingdom Lodge – Jambo and Kidani!

DVC As A Millennial

Millennials typically spend their money on experiences, preferring these over tangible items. Samantha looks at her DVC contract as a bit of both. She has a place to take her family and friends to when they vacation at Walt Disney World but does not see it as a static place that she owns a part of, like a vacation home.

When she was considering purchasing her contract, Samantha looked to her parents for guidance. When Samantha reached the end of her phone tour, her guide asked if she was ready to buy, and she told him that she had to consult her financial advisors – Mom and Dad! Dad encouraged her to buy in right away! Mom was a bit more skeptical but agreed with Dad after they ran the numbers. Samantha added her mom to the contract, so Mom can enjoy all the perks of the Blue Card even if Samantha isn't with her.

She has received some skepticism over her DVC purchase at such a young age. Her friends thought she was a little crazy to buy a timeshare, but she knew she wanted to go to Disney every year! When she travels to Walt Disney World and shows her DVC card, Cast Members usually do a double-take and ask if she's on someone else's contract. With pride, she says, “No, those are my points!”

Samantha initially bought DVC thinking that her family would stay in a studio once per year for a week. Now she knows how to stretch her points by taking several three- to four-night vacations throughout the year. Luckily, she lives near an airport, so getting to Orlando is easy!

Samantha's favorite pre-DVC memory took place one night during the Main Street Electrical Parade. Her family didn't feel like watching the parade, so they headed into her dad's favorite show – The Country Bear Jamboree. They know the words to all the songs and had so much fun singing along…as the only guests in the theater! The Cast Members enjoyed this “show” so much that they invited the family to stay for another show.

Her favorite DVC memory happened on her first trip as a member. While watching Happily Ever After from Top of the World Lounge, she looked at her cousins and little sister. She felt this overwhelming sense of gratitude for the ability to bring her family to Disney World and continue creating special memories.

The “Wait and Stalk” Method of Reservations

Samantha has had good luck at the seven-month mark with a tactic that she calls “Wait and Stalk.” If the resort she wants is not available at seven months, she'll book what she can, while keeping the rest of her reservation at Old Key West and waitlisting the other nights. She doesn't wait on the waitlist though – she continuously stalks the Availability Tool! This tactic has gotten her a last-minute add-on at Polynesian and two nights at Jambo.

Samantha has a goal of staying at every Walt Disney World DVC resort before her 30th birthday! One day, she will try a resort-only stay, most likely at Vero Beach or Hilton Head. She can't be in Walt Disney World and not go to the parks!

Another thing she does is to plan something new for each vacation. In December 2019, her family enjoyed the Hoop Dee Doo Revue for the first time!

If Tinkerbell gave Samantha 2,000 one-time use points, she would book a Theme Park View Grand Villa at Bay Lake Tower. She would bring along her family, aunts and uncles, and all her cousins for a vacation between Christmas and New Year's. They could enjoy the fireworks together, then the adults could kick off the New Year with a Monorail Bar Crawl!

Samantha encourages prospective members to take their time researching DVC and talk to other members. She said that having her mom's friend and Facebook groups like My DVC Points Community to turn to really helped her navigate becoming a member.