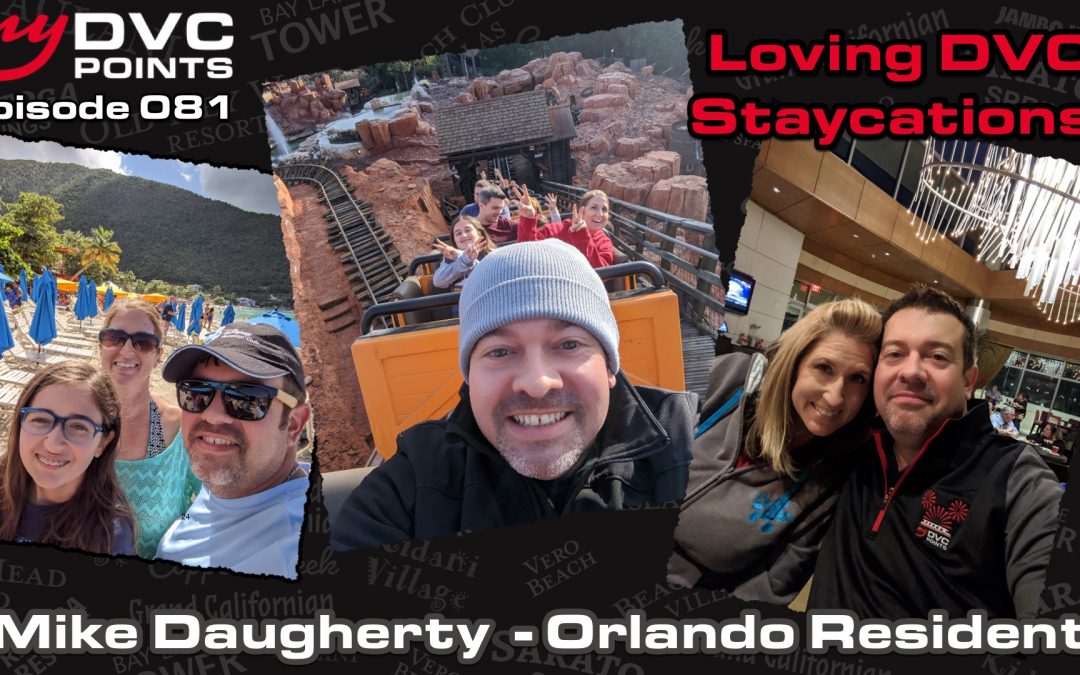 Mike Daugherty has loved every aspect of Disney since he was a kid when his dad would bring all the kids to Walt Disney World once a year. In this episode, Mike shares his favorite Disney memories, his story about buying into Copper Creek, and how he and his family enjoy DVC and parks as locals. With a 50 minute commute to the Magic Kingdom, Mike and Alicia love their Disney Staycations!

Mike is a Florian, born and raised! He grew up on the Space Coast in Cocoa Beach and moved to his current home in Sorento about fifteen years ago.

As a kid, Mike enjoyed family trips to Disney once per year. He loves looking back on experiencing the parks with his dad, who really sparked Mike's love for all things Disney. Most trips were day trips, but once the family stayed on property for New Year's Eve! Mike lost his father when he was 12 or 13, and he still thinks of him every time he rides an attraction they experienced together.

Luckily for Mike, he met another huge Disney fan: his wife! She grew up on the West Coast and had been going to Disneyland since she was a little girl. He says that their love of Disney brought them together, and it was a “match made in heaven.”

Mike and his wife enjoyed Walt Disney World vacations together and with their children for many years as Annual Passholders, but did not seriously consider DVC. They usually stayed on property at value resorts and found those suited their needs as a family. On one trip, the couple decided to splurge and stay at Yacht Club. This trip got them really thinking about becoming DVC members!

While on their first Disney Cruise, Mike attended a DVC presentation. After doing the math on vacation spending, Mike and his wife decided to buy a contract at Copper Creek. They also scored a great discount because their daughter was a Cast Member!

Mike and his family typically vacation in Deluxe Studios, and they have been able to enjoy quite a few resorts since becoming members two years ago. They've stayed at Copper Creek, Bay Lake Tower, Saratoga Springs, Beach Club, and the Polynesian. So far, the Poly is their favorite!

Due to being locals, Mike and his family have a bit more flexibility when it comes to visiting the parks, but he still books their resort at the 11-month window. They usually vacation in August, September, or October and have good luck at the 11- and 7-month marks. If Mike cannot get them the resort they were hoping for, he picks up whatever is available and checks availability. He says persistence has paid off for him!

Mike and his wife are currently planning to visit Aulani in 2021. She also wants to take him to Disneyland for the first time, as she thinks it will “change his world.” Mike is hoping to add a few days at Disneyland to their Aulani trip to make it one epic vacation!

If Mike received 2,000 one-time use points, he would book an Adventures by Disney vacation! He says that there are so many beautiful places in the United States that he still hasn't seen, so he and his wife would start with one of the trips in Arizona, Colorado, or the Grand Canyon.

Mike urges anyone thinking of buying into DVC to take the time to really understand how it works. He also advises people to consider what their budget allows for, and for some, it may be resale. He says new members should “start small,” because you can always add points on later!