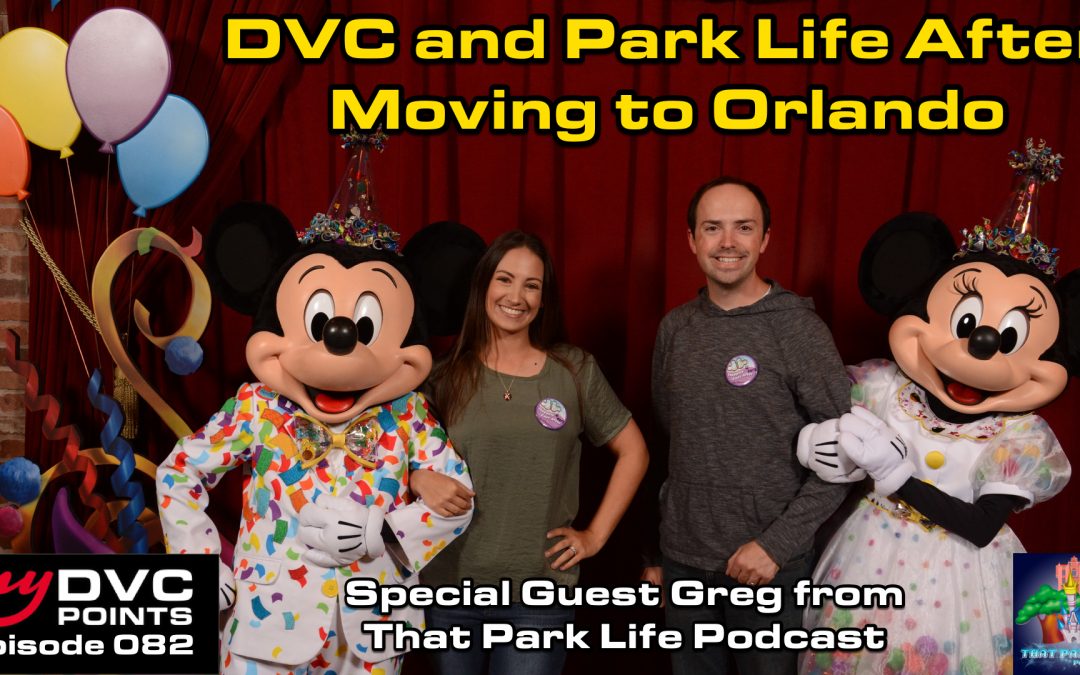 On this show, Chad chats with Greg, one of the co-hosts of That Park Life Podcast! Greg and his wife, Nicole, are also Florida locals and owners at Old Key West. He shares his Disney story, how moving to Florida changed the way he and Nicole do DVC, and all about “That Park Life!”

Before DVC, Greg and Nicole vacationed at Walt Disney World once a year or once every year and a half. Typically, they would do a split stay with a few nights at a non-DVC resort and a few nights at a DVC resort with points given to them by family. Eventually, they began thinking about visiting Walt Disney World more than twice per year, so they started doing a bit of research on becoming members.

Greg and Nicole became DVC members before they were married or owned a home! Greg was 28 or 29 at the time, and the couple was renting an apartment in Long Island. After becoming members, they purchased their first home together in Connecticut. They took advantage of cheap flights to visit their “second home” whenever they could, typically three to four times per year!

The couple initially purchased 50 points via resale at Old Key West, but addonitis hit quickly! After their first week-long stay in a studio at Saratoga Springs, they went home and purchased more points.

Greg loves that DVC allows them to stay in deluxe resorts that they could otherwise not afford. He also says that if they do split stays at non-DVC resorts, the vacation doesn't feel like it truly starts until they check into the DVC resort.

So far, Greg and Nicole have stayed at every Walt Disney World DVC resort and The Villa's at Grand Californian. They haven't stayed at Disney's Hilton Head Island Resort or Disney's Vero Beach Resort yet, but hope to do so in the future.

Due to Old Key West having ample availability, Greg typically waits to book until the seven-month mark. Their upcoming stays include the Polynesian in March, Bay Lake Tower in April, and a trip “home” to Old Key West in September.

Greg and Nicole typically stay in Deluxe Studios but have become “spoiled” by several stays in One-Bedroom Villas. They nicknamed a particular suite at Old Key West “Greg and Nicole's Suite” after being randomly assigned to it twice. Sadly, the plaque from DVC is not yet forthcoming.

Greg and Nicole are both big Disney fans! They made several trips together while they were dating, one of the most special was when Greg proposed on Main Street, USA! The couple also tied the knot at Disney at Sea Breeze Point on Disney's BoardWalk.

They had always talked about moving closer to Walt Disney World, and in 2018 they made it happen! Greg, Nicole, and their dog Reba made the long drive from Connecticut to Orlando in January. Greg remembers going from 10-degree weather to 50-degree weather fondly. Perhaps not so wonderful was when he opened the car window to let the breeze in, his jacket flew out onto the highway! Greg saw it as a symbol of never having to deal with harsh winter weather ever again.

Enjoying DVC As A Local

Now that he's an Orlando local, Greg has been using his DVC points a bit differently. Instead of week-long stays, he and Nicole typically enjoy long weekend staycations. Greg says one of the best parts of being a local is getting to take advantage of last-minute availability to book one or two nights at a DVC resort. He and Nicole also love being able to access the Walt Disney World restaurants for last-minute date nights.

Greg usually books at the seven-month mark and likes to book around Moonlight Magic events. Since he's a local, he isn't bummed if the event fills up, but he's had good luck with registration. He'll be at the Magic Kingdom Moonlight Magic event on April 21st if anyone wants to say hi!

Living so close to Walt Disney World, it's tempting for Greg and Nicole to spend a bit of money. Greg is “wallet-motivated,” and has learned to maximize programs like Tables in Wonderland, so they get the most out of each meal and park day. He also used to pack an electric skillet so he and Nicole could cook at least one meal in their studio's kitchenette.

Nicole is known as “the character whisperer,” so character meals are always fun! The couple visited Toppolino's Terrace for breakfast in December, and she had a fantastic interaction with her favorite character, Donald Duck. Upon hearing he was her favorite, Donald whisked Nicole away to another table, and they chatted for a few minutes. Greg also recommends getting to Toppolino's Terrace at sunset, as it is gorgeous!

Bay Lake Tower is Greg's favorite DVC resort, due to its proximity to the Magic Kingdom. His goal is to stay in a Grand Villa!

Greg also wants to check out Aulani, but Nicole is not a fan of flying, so it may be a few years before they make the trip there. In the meantime, he'll enjoy the Aulani model room!

Advice for New or Prospective Members

Greg acknowledges that DVC isn't for everyone, but encourages people to think about it if they plan to visit Walt Disney World at least once per year. He says you'll end up going more often once you're a member!

Greg and Nicole felt good about purchasing into DVC for a few reasons. First, Disney is a stable company that is continually adding new things, so Walt Disney World isn't going anywhere. Second, the timeshare is flexible and retains its value over time. Finally, they know the rental market is strong, so if they don't use their points, they can still get some value out of them.

If Tinkerbell gave Greg 2,000 one-time use points, he would book one week in a Theme Park View Grand Villa at Bay Lake Tower and one week in a Cascade Cabin at Copper Creek. His guests would be the highest bidder in a charity auction for Give Kids the World!