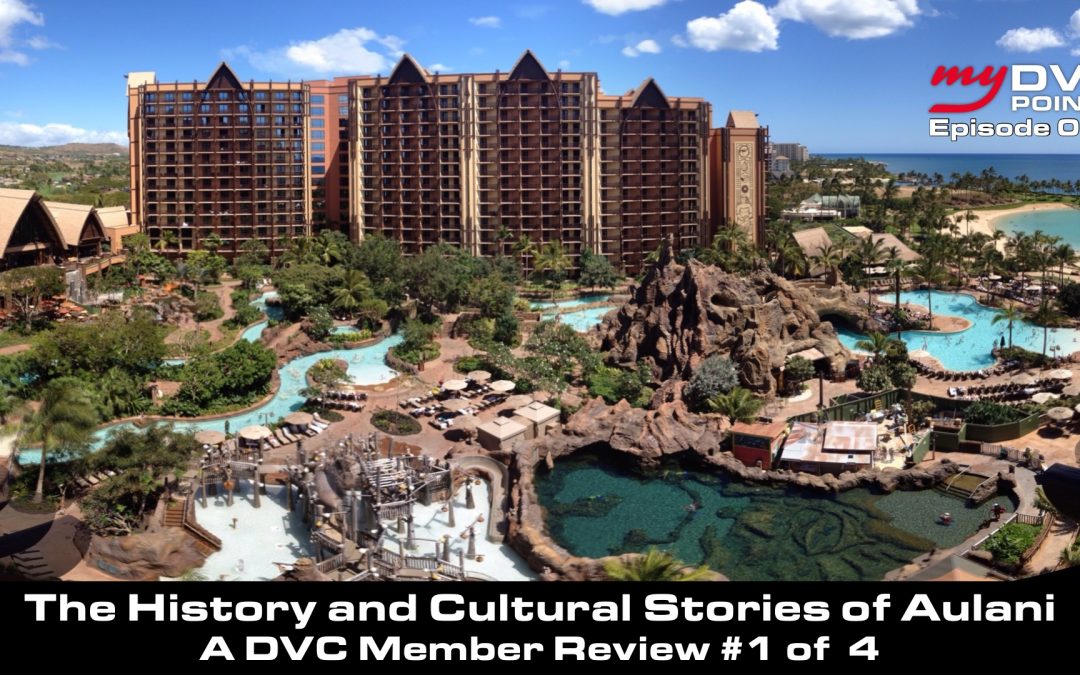 This is the first of a four part series on Aulani. We explore some of the historical stories and cultural influences imagineers built into the design of the resort. Join Chad, Brian Reed, Stokes Laird and Kevin Quigley for as we kick off our Aulani review series.

The Concept of Aulani

Aulani, A Disney Resort & Spa, was formally announced in October 2007, but its history goes back to the first years of Disney Vacation Club. DVC was looking to develop properties that were not attached to the theme parks and had been successful with Vero Beach and Hilton Head Island. A survey created by DVC found that that Hawaii was the second most popular travel destination, (behind Walt Disney World). Walt himself enjoyed vacationing on the islands, so a Disney resort in Hawaii made perfect sense!

Disney spent over ten years looking for the perfect spot to develop for the resort and settled on Ko Olina. The Hawaiian government had previously held this area off from developers but eventually allowed Marriott and Disney to build resorts there.

Disney had learned from previous experience that locals are not always welcoming towards the Disney brand. After the failed American history theme park in the Washington D.C. area, Disney approached this new Hawaiian project with more cultural sensitivity

Joe Rohde, a legendary Imagineer and a resident of Hawaii, spearheaded the project intending to keep the resort as authentically Hawaiian as possible. Rohde assembled a cultural advisory board made of local elders, hula masters, and artists to create the design of the resort. This intensive research allowed Disney to build a functioning vacation destination that respected the land and paid homage to the Hawaiian culture. Aulani enjoys the distinction of being the largest exhibitor of Hawaiian art in the world, with indigenous artisans creating masterpieces that are displayed throughout the resort.

The resort's design and layout pay homage to the natural landscape of Hawaii. Guests are welcomed on the second floor of the resort, and all of the amenities and activities are placed on a gradient moving down towards the sea. The landscaping mimics the move from the mountains to the sea, as vegetation goes from lush to sparse as one gets closer to the water.

While Aulani respects the Hawaiian cultures in many ways, it is also a Disney resort. As we all know, a Disney resort would not be complete without a few characters! The Fab Five and Chip & Dale were woven into the story of the resort with the idea that they are all on vacation. These celebrities are here to enjoy an authentic Hawaiian experience with you, and they don't mind posing for a few pictures with their adoring fans!

Stitch can be found roaming through the resort, but you will not find his friend, Lilo. Local Hawaiians felt that Lilo represented the tacky, imported tiki culture of the 1950s, not what it truly means to be Hawaiian. Stitch is completely fictionalized, so they were okay with having him featured at the resort.

Guests can also interact with Moana at Aulani. Local Hawaiians embraced her, as they identified with her fierce, independent spirit. The fact that she is the daughter of the chief and part of a wayfaring society also made her a more authentic presentation of Hawaiian culture.

Characters are dispersed throughout the resort in a variety of ways. In keeping with the current set-up at Walt Disney World, characters do have designated meeting spots and times for photos. To also keep to the Disneyland tradition of more relaxed character meet-and-greets, guests can also interact with roaming characters.

Disney Vacation Club began selling contracts at Aulani in July 2010, and room reservations opened in August of the same year. Abruptly, sales were halted in August 2011, after it was discovered that the proposed dues would not cover maintenance costs. The contracts already sold also did not allow for Disney to adjust the dues as time went on, instead promising owners an unsustainable fixed rate. As a result of this mismanagement, the President of DVC and two senior-level managers were fired.

With adjustments made, sales resumed in 2012. Owners that had bought under the fixed dues rate were granted subsidized dues as a compromise. Some of these original contracts pop up on DVC Resale Market from time to time, so keep an eye out if you're looking for Aulani points!

On opening day for the resort, Disney began surveying guests so that resort amenities and experiences could match what they were looking for in a Hawaiian vacation. The guests' feedback initiated a three-phase reimagining of the resort, which commenced in 2013.

Phase One consisted of changing the area around the Waikolohe Pool, the resort's feature pool. Guests complained of having to “rope drop” the pool to secure their chairs for the day, so Disney expanded the deck area to allow for more seating. To address adult guests' need for a more tranquil space, Disney added Wailana Pool and pool bar to the resort

Phase Two brought vast improvements to the Starlit Hui, which was a free dinner show offered at the resort. To compete with Paradise Cove, Disney brought in a third-party entertainment vendor and changed the simple dinner show to a full-blown luau. It has since been renamed Ka' Wa'a Luau.

The final phase added 303 suites to the resort, complete with full kitchens, washers and dryers, and units with a third bedroom.

Our Favorite Cultural Experiences and Stories at Aulani