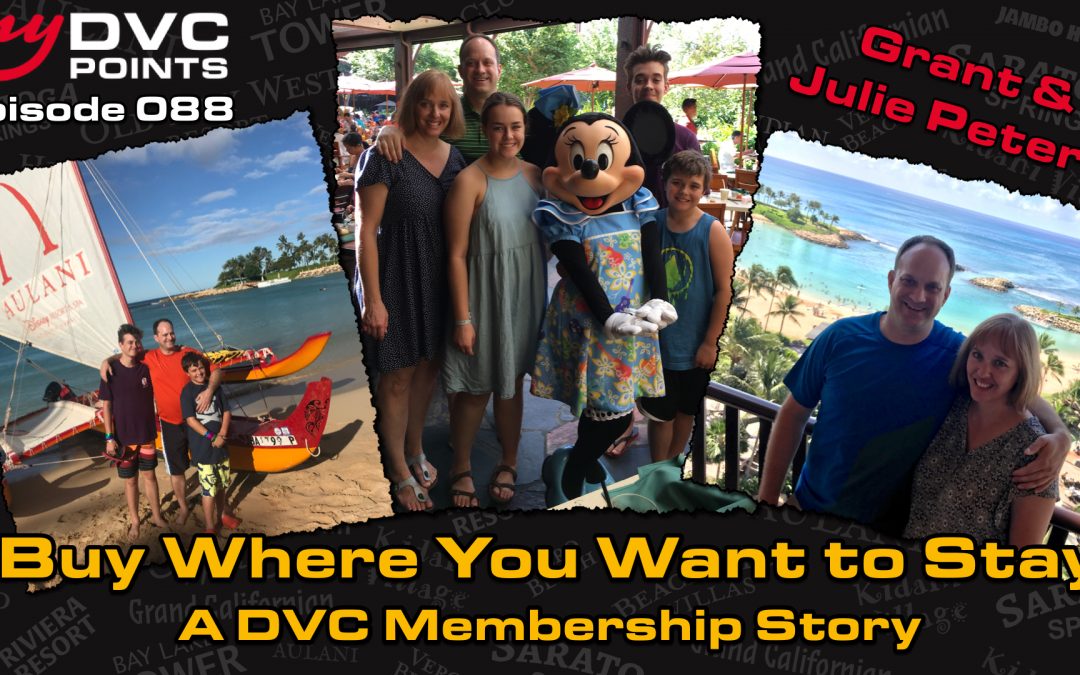 On today's show, Chad talks with Grant and Julie Peters, owners at Aulani and Copper Creek Villas & Cabins. Grant and Julie share their journey to becoming DVC members, a bit of addonitis, and how DVC fits their family of five. Grant's #1 advice for DVC members is made an informed decision about your home resort. The Peters are in the buy where you want to stay camp.

Grant never went to the Disney parks as a child, as it was not a priority vacation for his family. Julie didn't know of many other kids in Western Canada that went to the Disney parks, but her family did! Julie went to Walt Disney World when she was in kindergarten and then went to Disneyland in high school with the band.
Grant and Julie first went to Disney World together in 2000, soon after they had gotten married. They were on their way to visit Julie's parents in the Bahamas, so they decided to stop into the Magic Kingdom for the day.
The couple took their children to Walt Disney World for the first time in 2003, when their daughter was two years old, and their first son was a few months old. Grant was attending a medical conference in Orlando, so the couple invited Julie's parents to come with them. When Grant could sneak away from the conference, the family had a great time in the parks! Grant says, “That's when the Disney bug really started to set in.”
The Peters family would return to the Disney parks a few more times before becoming DVC members! In 2005, they went to Disneyland with some family friends. They stayed on-property for the first time at Walt Disney World in 2007 at Port Orleans. In 2012, they decided to splurge a bit, staying Club Level at Wilderness Lodge! According to Julie, “We pretty much spoiled ourselves at that point for anything else.”
The family also enjoyed stays at Copper Creek and a night at Saratoga Springs before setting sail on a cruise.
The Peters consider themselves “split” in terms of their home park. They have traveled to Disneyland six times and Disneyland five times.

Before sitting down for a DVC presentation, Grant had been to a few other timeshare sales pitches. He always left them feeling unimpressed and turned off by the idea of a timeshare.
In 2017, when the family was visiting Disneyland over Spring Break, they found themselves heading to a DVC presentation. The parks were so crowded that it was hard to navigate them, and the family happened to pass by a DVC kiosk. Grant noticed that one of the perks of attending the presentation was free FastPasses, so they signed up and attended! Grant was pleasantly surprised at how great the Vacation Guide they talked with was and the low-pressure approach DVC had for sales.
Grant knew that his family would need more frequent vacations as his work got busier, and he knew they were in a good spot financially to buy into DVC. The family decided to purchase at Aulani, due to their love of Hawaii. They had not stayed at Aulani before their purchase, but they were very impressed with the brochures and information available online.
The Peters family had considered purchasing a vacation cottage at one point but ultimately decided that it didn't make sense for them logistically or financially. They like that DVC allows them to have this vacation home, without them having to maintain a physical property.

The Peters family took their first vacation to Aulani in the fall of 2017. They traveled during the kids' fall break in November, and everyone had an amazing time! Julie says, “The thing we really loved about Aulani was that it was Disney enough. It was the Disney quality, and it had all the Disney CMs and all the good things that you expect about Disney. But it was so Hawaii as well. So we really felt like we were in Hawaii.”
Grant says, “Aulani seems more Hawaii than Disney.”

Grant admits to having second thoughts about their DVC purchase soon after they bought in. He did a lot of research after their contract went through and made a significant effort to learn all the ins and outs of DVC. He says this research fueled their addonitis later.
The Peters added on at Copper Creek Villas & Cabins after a fun-filled week in one of the Cascade Cabins! Julie says their kids roll their eyes every time they fall in love with a new resort, wondering if the next add-on will be there.

One of the things Grant and Julie love about DVC villas is their ability to sleep five people, which they found scarce on the resort side at Walt Disney World. On their first Aulani trip, they stayed in a one-bedroom, but have since upgraded to two-bedroom villas or a cabin at Copper Creek. Grant says they always intended to book larger rooms and to bring their extended family (and grandkids one day), so he didn't mind purchasing larger contracts to make that happen.

Typically, the Peters use the kitchens in their two-bedroom villas or cabins for breakfast. They like to have one breakfast and all their dinners at a restaurant while on a Disney vacation. Julie's favorite is Whispering Canyon at Wilderness Lodge, while Grant favors Sci-Fi Dine-In Theater at Hollywood Studios and Yak & Yeti in Animal Kingdom. According to Julie, “I don't believe that cooking and vacations go together, so I don't ever cook dinner on vacations.”

So far, the Peters family has stayed at Copper Creek, Aulani, and Saratoga Springs with their DVC points. They have also been lucky enough to enjoy a Member Cruise from San Diego to Vancouver. Julie says they enjoyed mingling with other members, and this vacation solidified their happiness in purchasing DVC.

When asked how DVC has changed their family vacations, Grant says that it allowed them to shift from a scarcity to an abundance mentality. They have time to slow down and appreciate the little details at Walt Disney World. Grant laughs that they are still the family that stays in the parks until they are “kicked out,” but they don't feel the need to rope drop like they used to. The family takes a slower pace to vacations, even enjoying days by the pool at their resort.

Julie says that sometimes they regret not purchasing DVC when the kids were younger, but is happy that they still love their family Disney vacations. She says her teens frequently ask, “When are we going back?” Julie also likes that “Disney grows with your family.”

The Peters family enjoys DVC perks like discounts on dining and shopping, as well as free parking at Aulani.

Due to Grant's job and limited vacation time, the family always books their trips at the eleven-month mark. They were not utilizing the waitlist, as they were staying at their home resort, but this changed with their upcoming November vacation. They are hoping to do their first multi-resort split stay at Copper Creek and BoardWalk!

Julie wants to travel with Adventures by Disney and go on another Disney Cruise Line vacation. She says that being DVC members has really opened their eyes to other experiences that Disney has to offer.
Grant would love to plan vacations around special members events like Moonlight Magic! He thinks planning shorter trips and vacations on shorter notice will be easier once he and Julie retire and the kids finish school.

One of the moments the Peters kids talk about all the time is the surprise tour they got of Animal Kingdom. On the way to their appointment to add on more points, the DVC Cast Member drove the family backstage through the park!

Julie reminisces on the first Mickey's Not So Scary Halloween Party they went to in 2007. Her parents had joined them on this trip, so they stayed in the room with the couple's youngest son, who was one-and-a-half at the time. Grant and Julie took their two oldest to the party, and they had so much fun! At one point, it started to rain, and a lot of people left the party. The Peters family stayed and ended up being the only group on Dumbo and “it's a small world.”

Julie also loved the day the family ended up in Cars Land at Disney's California Adventure, just at sunset. They got to see all the neon signs in Radiator Springs come to life, and she thought it was so beautiful.

Grant fondly remembered a moment in Hollywood Studios in 2018. The family was getting ready to welcome a new puppy, and they were having a tough time settling on a name. While eating dinner at Rosie's All-American Cafe and going over their list, they decided Rosie would be the perfect name.

The Peters would have some big plans if Tinkerbell decided to grace them with 2,000 one-time use points. Julie would book an Adventures by Disney vacation or European Disney Cruise Line vacation. Grant would travel to Tokyo, so the family could experience Tokyo Disneyland, Tokyo DisneySea, and explore Japan.

Grant's advice to new or prospective members is to think about how your family will use your DVC contract, in terms of where you want to stay, budget, and what accommodations you will need. For his family, they need to book eleven months in advance, so they bought where they plan to stay. They also require larger villas, so they purchased enough points to cover that. For someone who doesn't plan as far in advance as he does, Grant suggests that buying the lower-cost resorts that tend to have a lot of availability (e.g., Old Key West), may suit them better.

What Brings Out the “Disney Magic”?

Julie says their family reflects on the fantastic Cast Members they have interacted with, often many years later. When their daughter was younger, she was disappointed that she didn't have a good view of World of Color. A Cast Member overheard and invited her to sit in the VIP section. Another awesome Cast Member, James at Wilderness Lodge, spent a lot of time talking with the kids and telling them stories. Julie says, “That's the thing that's different at Disney, is the Cast Members. They really care about their jobs, and they really care about providing amazing service. They almost become family in the time that you're there.”

Grant loves how their Disney vacations have come to mark moments in their kids growing up. Things like fireworks shows create an emotional bond and attachment until the moment is much more than a fireworks show. He says, “That's the neat thing about, about being in DVC, but also just going back over and over again. You really do create those memories and they take you back to your prior time in your life.”

Grant is an active member of the My DVC Points Community on Facebook. Julie is accessible on Facebook as well.