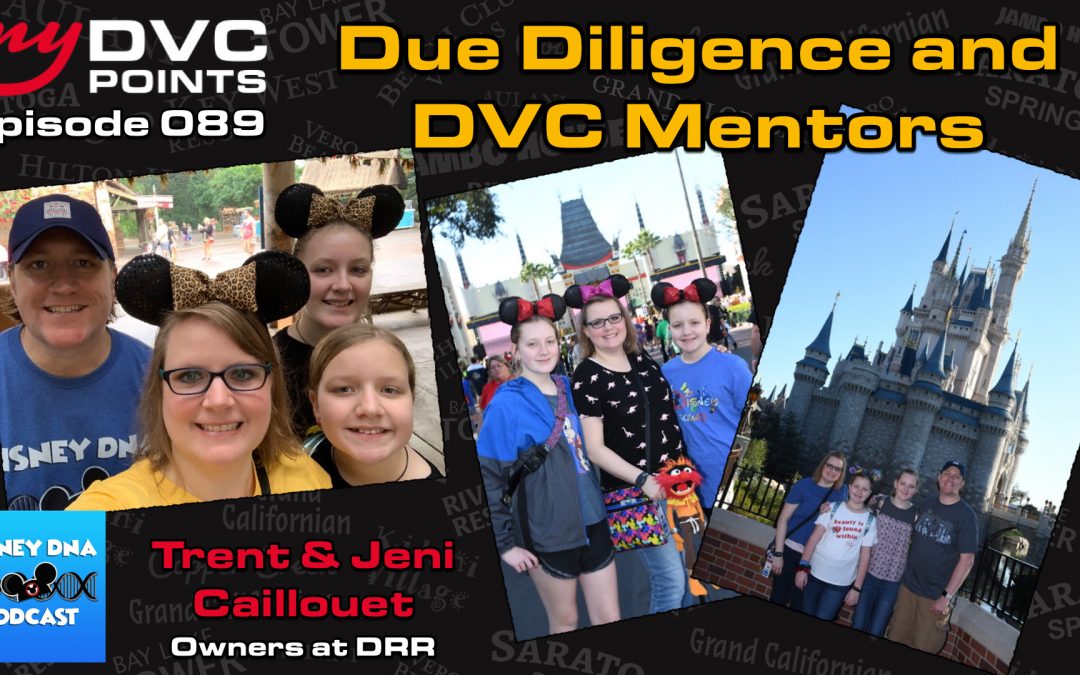 In this episode, Chad chats with Trent and Jeni from the Disney DNA Podcast! They talk about their passion for Disney and how it inspired their podcast, that other DVC members are your most valuable source of information, and how they “future-proofed” their vacations by buying into DVC. Hosting a Disney inspired podcast is a major lifestyle commitment. DVC is also another lifestyle commitment. Find out why Trent and Jeni took their time in joining Disney Vacation Club in Episode 089 of the My DVC Points Podcast!

Trent and Jeni started the Disney DNA Podcast in 2015, after taking their two daughters on their first trip to Walt Disney World. Jeni admits that she was a little skeptical when Trent proposed this project, as she says “I thought ‘ Who would want to listen to two little rednecks talk about random Disney stuff?'” She has been proven wrong, as their podcast listeners have become like family to them!

The couple knew they wanted their podcast to be about sharing their family's love of Disney and helping other families plan their magical vacations. But they did have a little trouble coming up with the name. One day, their daughters were watching a science cartoon about DNA, and that's when the name came to Jeni – The Disney DNA Podcast!

Trent loves that the podcast allows their family to share their passion for Disney and spend quality time together in a way that is more meaningful than watching something on TV. He hopes their show helps people plan their Walt Disney World vacations, and also brings some of the magic of the parks into their everyday lives.

Disney In Their DNA

When guests come onto their show, Trent and Jeni ask them when they knew Disney was in their DNA.

For Trent, his love of Disney was born when he was eight years old. His neighbors loved Disney and got him interested in the classics, like Snow White and the Seven Dwarfs. He fell in love with The Disney Company's history, movies, and attractions before he visited Walt Disney World! Now that he's been to Walt Disney World a few times, he says, “That's what I still really cherish, being that young boy at the age of eight, getting that first visit. That's where everything started for me.”

Jeni found her love for Disney a little later in life. As a child, her family grew up in the country, so she spent more time outdoors and caring for her horses than she did watching TV. Her first visit to Walt Disney World wasn't until she and Trent went for their honeymoon in 2005! When the couple decided to take their daughters to Walt Disney World, Jeni found herself falling in love with the company through her trip planning research. That trip in 2014 was the spark for her! She says, “I've definitely made up. I've watched every Disney movie with the kids, and I have pretty much caught up.”

Trent and Jeni took their daughters, Sophia and Brooklyn, on their first Walt Disney World vacation when the girls were six- and eight-years-old, respectively. Since then, they have traveled to the parks once per year, except for 2018 when they built a home and found moving to be a bit chaotic! They prefer to travel between Thanksgiving and Christmas, as the weather in the South is much cooler.

In 2017, the family brought along Trent's parents for their first visit to the parks in 30 years! They are not huge Disney fans but had so much fun experiencing the parks with their granddaughters. Trent says, “My parents just don't get the Disney thing. They just like to watch the Hallmark Channel. It's crazy. They see the love and joy that we have for it because they hear our conversations, see our pictures, and all those things. So they see it, they just don't wanna live it.”

Before becoming DVC members, the family stayed at Caribbean Beach Resort, Coronado Springs Resort, Port Orleans Riverside, Art of Animation, and Pop Century. Jeni jokes that she would rather “sleep on the side of the road” than stay in The Little Mermaid rooms at Art of Animation again, but knows that some families love it. Trent says he always preferred the moderate resorts, as the rooms were a little bigger. However, he says that even those rooms can feel a little tight for their family of four.

When Trent and Jeni started their podcast, they didn't know a lot about DVC. All they knew was that being “locked into a timeshare” didn't fit their lives at the moment. Through their podcast listener community, they met several DVC members and got to know a little more about the program as time went on.

Trent and Jeni's DVC mentors are their good friends, Gina and Todd! Before going on a DVC tour, Jeni spent hours talking with them about their experience as members. She didn't want to go into the tour being “sold” DVC; she wanted to “learn” DVC! Jeni says that her conversations with Gina and Todd have been more helpful than any information she could have found online.

On one of their trips, the family checked into Pop Century on a Saturday, and by the next day, Trent said he was done with staying at Pop and wanted to learn more about DVC. They scheduled their tour for that Friday, giving Jeni plenty of time to ask Gina and Todd more questions and to pray on it a bit. They spent six hours with their Vacation Guide, and Jeni says he was so patient with them, especially when it came to their questions about financing. By the end of the tour, they were members!

Trent and Jeni are happy with their DVC purchase, as they had already been vacationing like members and wanted to keep that trend going. Jeni says, “We plan on going until we're both chasing each other in scooters.”

Jeni says their purchase came with one big hitch. They purchased in November and planned to start paying their dues monthly, beginning in January. Unfortunately, their contract did not close in time for this to be an option, so they had to scramble to pay the entire year's worth of dues. While they were able to do it, Jeni wishes they had just known that might happen ahead of time so they could have planned for it.

Trent and Jeni were very open with their daughters regarding the purchase of their DVC contract. They used their journey as a life lesson, teaching the girls about budgeting and finance, but they also wanted them to feel like they had a part in the decision. Both Jeni and Sophia say they could stay anywhere and be happy, but Trent and Brooklyn are a little more particular with their resort choices. Ultimately, the family decided to buy into Disney's Riviera Resort.

One of the big reasons they chose Riviera is what Trent calls “future-proofing” their vacations. Jeni has fibromyalgia and other medical conditions that may one day limit her mobility. Trent likes that the Skyliner is easily accessible to wheelchairs and scooters, should Jeni ever need to utilize them. For Jeni, the configuration and location of their rooms matter to her, as she may have to store a mobility device in them one day.
The family agreed that Riviera really “fit” them. Trent felt at home, even in the model rooms at the Saratoga Springs Preview Center. Jeni's favorite park is Epcot, so having a home resort close to that was a huge bonus for her!

Trent says they plan to stay in Deluxe Studios as long as possible, as he's heard that going back from One-Bedroom Villas to Deluxe Studios can be difficult!

Unlike a lot of Disney fans and her husband, Jeni has no desire to stay on the Monorail Loop. She says that “everyone stays there,” and she likes to do Disney a little differently.

Trent's favorite Disney memory was the family's first trip to Walt Disney World in 2014. He loved walking down Main Street, U.S.A. and seeing the joy on the girls' faces, and they still look over the pictures and talk about that trip today!

For Jeni, her favorite memory happened on that first trip. The only thing she really wanted to do was explore all the countries around the World Showcase at Epcot. The family's Epcot day was on Thanksgiving, and Jeni was so excited. Trent and the girls had been complaining all day about their impending “tour around the world,” and Jeni had just had it! She told them that they were going back to the resort, but made everyone stop in Mexico so she could pick up a sugar skull as a souvenir. The girls fell in love with the pavilion as soon as they entered it and asked to see all the other countries. Jeni said, “No, we're going back to the resort. Y'all have made me mad.” The family laughs about it now, and they always spend a day in World Showcase!

If Tinkerbell granted Trent and Jeni's family 2,000 one-time use points, Jeni would want to book a three-bedroom Grand Villa at any resort. She wants a room where their family, Gina and Todd's family, and any other “squatters” could be comfortable and have access to a full kitchen, as Jeni loves to cook. Jeni has made do cooking in the studios; don't be fooled! She says, “If anyone smells red beans and rice cooking, that's my room!”

Trent would be happy to book any room at The Villas at Disney's Grand Floridian, just to say he stayed there!

Trent advises prospective members to think about how many times they usually plan to travel to Walt Disney World. He says that for families that don't plan to go at least once per year, DVC may not be a wise investment.

Jeni encourages prospective and new members to ask questions without fear! She usually carries a little notebook with her on their vacations to take notes for the podcast, and she found herself writing quite a few DVC questions. The fear of being judged for asking “silly” questions kept her from asking other DVC members, podcast listeners, and different groups on Facebook about DVC. She says that had she gotten over that fear and started asking questions sooner, their family would have become members years ago!

Trent and Jeni also recommend taking a hard look at your budget to see if DVC makes sense for your family financially. For both of them, the financial commitment was scary, considering that DVC is a fifty-year commitment. Once Jeni learned that this fifty-year commitment consisted of ten years of loan repayment and only annual dues after that, they felt much better about becoming members.