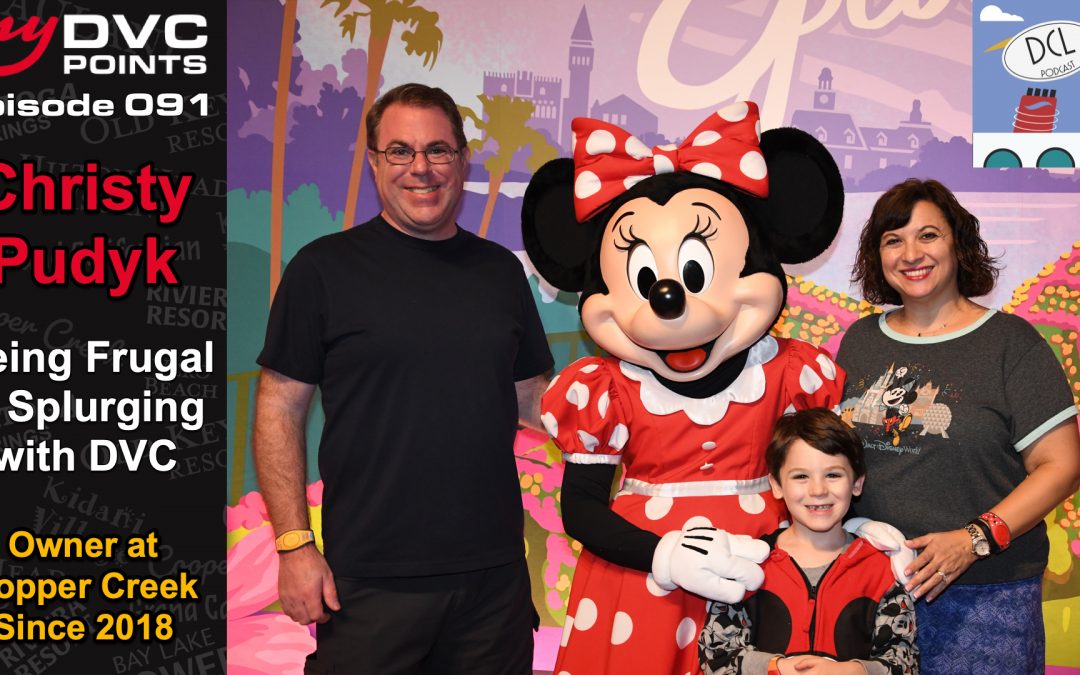 On this episode, Chad chats with Christy Pudyk from the DCL Podcast and Pack Your Pixie Dust! Christy shares her experiences as a travel agent, becoming a DVC member, and being frugal in her everyday life so she can afford some vacation luxuries.

Christy traveled to Walt Disney World several times as a kid, including a trip at seven years old, 11 years old, and a few times in her teen years. She became “obsessed” with Disney after traveling to the World with a friend and her family, and she was amazed at how much they knew about planning a vacation. Christy also made a girls' trip with her mom in 2006, a RunDisney trip in 2008, short trips before cruises, and her first trip with her husband in 2010.

A few years ago, Christy and her husband were on a walk and discussing what they would each do if they won the lottery. Christy decided she would give up practicing law and become a travel agent. She added this side hustle to her life in 2011, and after nine years in the industry, her answer has changed. If Christy won the lottery, she would stop practicing law and go on a bunch of vacations – to give another travel agent some work!

Christy became interested in DVC while on her first trip with her husband in 2010 but decided that the program was not for them at that time. In 2011, she and her husband stayed in a One-Bedroom Villa at Kidani on her friend's points, which deepened her interest. Unlike many DVC members, Christy got to practice her point management skills when she offered to manage that friend's points!

While on a Disney Cruise Line vacation in 2018, Christy and her husband decided to attend a Disney Vacation Club presentation. Before and during the meeting, the couple was firm that they were not buying in, just attending to get more information. After the meeting, Christy's husband said, “Maybe this could make sense.” Christy knows that statement usually precedes them agreeing on or purchasing something!

Ultimately, the couple had some more time to decide to buy into DVC, as they wanted to place the contract into a trust and could not do so on the cruise. Christy and her husband purchased a contract at Copper Creek through Disney, as the process was so easy, and Wilderness Lodge is their favorite resort. They used a gift from Christy's grandparents for the down payment and financed the rest, although not through Disney.

Christy says that buying into DVC made a lot of sense for her, even though she gets some perks and discounts by being a travel agent. Those perks could go away at any time, as they depend on her agency's sales and availability. Being a DVC member allows her family to book larger rooms with more flexibility while still allowing her to leverage the benefits of being a travel agent.

Christy and her family are frequent visitors to Walt Disney World, to say the least. After making a chart of all their vacations, she's figured out that her six-year-old son has visited 19 times, and she and her husband had eight couple's trips last year! When she recently called to see about renewing her Annual Pass, the Cast Member told her she had been in the parks for fifty-seven days out of that year.

Christy's family limits their use of their DVC villa kitchens to breakfast and snacks. She utilizes the coffee maker each morning to save money on her morning pick-me-up, and she will sometimes do a small grocery order so they can stock the kitchen with milk and breakfast essentials.

Although Christy describes herself as frugal, there are some expenses that she does not mind incurring, especially when they add convenience to her vacations. One of her splurges is the Orlando Airport Towncar Service, which her family has used for seven years for their transportation to and from MCO. Christy prefers this car service to Magical Express, as her family can get to the resort quicker, and the drivers will make a grocery stop for her, all at a price that is very competitive with Disney's Minnie Van service. She also utilizes this service when traveling to Port Canaveral for a cruise, as it expedites her family getting through security by avoiding the crowded buses.

So far, Christy and her family have enjoyed several stays at Copper Creek, including one three-night stay in one of the Cascade Cabins! They also enjoyed their Welcome Home trip over New Years at Beach Club and a stay at Animal Kingdom Lodge – Kindani Village.

Christy knows that “value” means something different to everyone, and she sums up her definition with the question, “How can I get an amazing experience out of something?”

For her, the true value in her DVC contract is the ability to experience resorts in a way that she would never pay cash to book. For example, she would have never booked the cabin at Copper Creek on cash or with a travel agent discount if one existed! She says that she is frugal in other parts of her life so that she can “splurge” a bit on her vacations and other experiences.

Even though Christy already did a stay in the Cascade Cabins at Copper Creek, it is on her bucket list to repeat the experience. She says the cabin was well-appointed, perfectly laid out, and the perfect place for a resort-focused vacation.

If Tinkerbell were to add 2,000 one-time use points to Christy's membership, she would book a Grand Villa at Aulani to coincide with her birthday in August. She would invite her mom to join her family for a week and says the room would be perfect for giving everyone their own space. She would then book another three-night stay at a Cascade Cabin at Copper Creek, with limited time in the parks.
Even with these two luxurious vacations, Christy would still have 600 points to spare, which she would use to book her other Disney vacations for the year!

Christy's advice for new or prospective DVC members is to sit down with a friend or reach out to someone in the DVC community. She wants all members to understand how their points work, how they expire, and how they should manage them. She also encourages members to really think about the purchase and do their research.