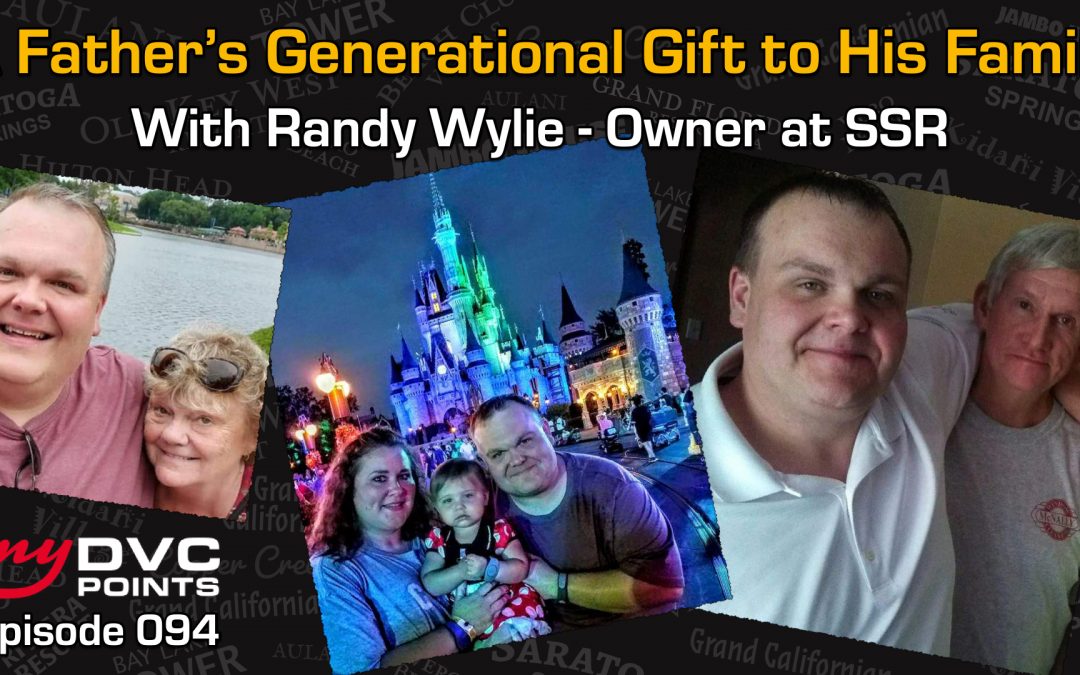 To celebrate Father's Day, Randy Wylie, an owner at Disney's Saratoga Springs Resort joins the show and shares the story of his father purchasing DVC as a multi-generational gift. Randy is one of the administrators of the Facebook group “Saratoga Springs for DVC Members” and was featured on Episodes 62 and 63, as part of our Saratoga Springs Review Series!

Randy found his love for Disney a bit later in life than most of our previous guests! When he was 25, his brother and his family had just returned from their first trip to Walt Disney World. His parents and his brother's family stayed at Disney's Contemporary Resort, and they spent a lot of time afterward telling Randy about how magical it was. Randy was happy his family had a magical vacation, but as a single 25-year-old guy, he viewed WDW as a place for kids.

Randy's dad changed his mind about making the trip to WDW by buying the family a contract at Disney's Saratoga Springs Resort…while on the vacation! He added his two sons to the contract, so Randy was a DVC owner before he even set foot on property!

For their first trip as members, the family did a split stay at Animal Kingdom Lodge and Vero Beach. According to Randy, “I was hooked, that first trip changed my life. Disney World and Disney Vacation Club took over. It became everything I could think about.” Randy hasn't let a year go by without going back to Walt Disney World, and now he has a wife and daughter to share in the magic with him.

Randy explains that his dad bought the contract to have something for the family that they could enjoy over generations. His dad has since passed away, and the family dedicates every vacation to his memory.

For the first few years of having their contract, Randy's family would always travel together. After his dad passed away, he and his brother would continue to bring their mom on their family vacations. Recently, his niece has started high school, and his brother's family is heavily involved in travel sports, so they are not able to go as often.

Randy says that managing the points with his brother is easy, as they are very close. They are a family that typically doesn't splurge on rooms, so they always have plenty of points to take the vacations they want. His mom and dad also set aside enough money to cover the annual dues, so all they have to do is book the vacations and enjoy them!

Randy once told his wife that all he wanted for their daughter was one thing. He said, “My daughter will be Disney, Disney, Disney.” Living the Disney lifestyle as most DVC members do, this has not been a tough thing to accomplish! Randy is excited for his daughter each time they go to Disney because he knows that with each year, she remembers more and create magical memories of her own.

For Randy, Disney is so much more than a vacation. He says, “Disney is my escape. I'm a sports fan too, and sports have been my escape. But sports can let you down. The last game of the season, if you lose, it's a letdown. There is no letdown with Disney. It's always welcoming. It's always there.”

He says the only tough time on a Disney vacation is waiting in the lobby for the Tragical Express. He is so happy for the families coming into the resort to start their vacation, while at the same time, he's upset that his magical vacation has come to a close.

For Randy, half of the Disney vacation is the planning! He describes the countdowns and important planning dates as being similar to someone giving you an oxygen mask. It keeps him going!

Randy's family typically books their home resort at eleven months, then does a seven-month switch. Usually, they do a split stay so they can experience multiple resorts in one vacation. He's had difficulty sometimes with getting the exact resort he wants, but he says that he's never disappointed. He has always enjoyed the resorts they end up staying at, even if they were not their first pick.

Typically, Randy's family likes to vacation the third week of October so that the adults can enjoy Food & Wine. He's found this time increasingly busy and increasingly difficult for the seven-month switch.

Randy's family has always purchased either the Quick Service or Standard Disney Dining Plan on their vacations. However, with the recent increases in price, his brother has moved the family more towards using Tables in Wonderland.

Randy's mom drives to Walt Disney World, so they have the ability to get groceries for their room by driving to Publix or Walmart. No rental car needed!

Maximizing the Value of Your DVC Contract

Randy recommends staying at one of the beach resorts for members looking to maximize the value of their contract during the resorts' “value seasons.” He says that Aulani, Hilton Head, and Vero Beach can have very low-cost rooms and offer a cost-effective vacation. This is because your family will not be purchasing park tickets or a dining plan, as you would at Walt Disney World. The pool, ocean, and activities are free!

On Randy's DVC Bucket List are: staying at a resort on the Monorail Loop, a trip to Aulani, and a Disney Cruise. He's waiting for his daughter to get a bit older so that she can remember their Disney Cruise Line vacation!

If Tinkerbell gave Randy 2,000 one-time use points to book the vacation of his dreams, he would book a split stay! Part of the vacation would be spent in a three-bedroom Grand Villa at the Villas at Grand Floridian, and the other part would be in a bungalow at the Polynesian.

Advice To New Or Prospective Members

Randy's advice is, “Don't expect to save money.” Although your family will be getting a deluxe room at a great price, you will still have to spend a lot of money on theme park tickets and dining.