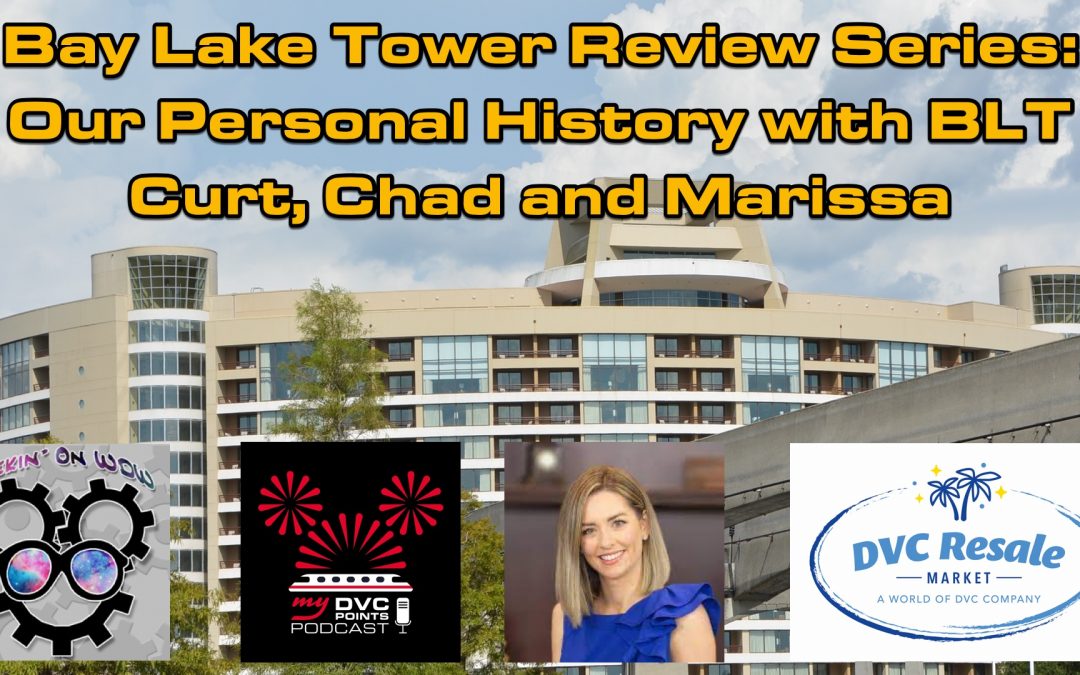 Marissa from DVC Resale Market and Curt Stone from Geekin’ on WDW Podcast joined Chad to talk about our personal histories with the Bay Lake Tower Resort. Episode 192

Curt talked about being an owner and purchasing directly in New York City with a Black Friday special. Chad talked about how he got started podcasting by being a Disney Geek. Marissa has a long DVC history and even sold Chad his BLT contracts as a new resale agent. When it was time to sell them years later, she ended up finding Chad a buyer when it was time to transition to a Florida house.

The guest speakers then transitioned to a brief history of The Contemporary Resort, then ultimately Bay Lake Tower resort, referring to an excellent history article posted by DVC Mike, the founder of DVCInfo.com.

The Contemporary Tower, the most prominent of the resort's four stand-alone buildings, was built as an A-frame with outer walls which slope inwards around an inner atrium. This design was a collaboration by Disney, the United States Steel Corporation, and Los Angeles architect Welton Becket. The building’s steel frames were erected on-site, and modular pre-constructed rooms, designed by California architect Donald Wexler, were lifted into the structure by crane. Disney's Polynesian Village Resort was built the same way, except rooms were stacked instead of slid in.

The resort, which was initially named Tempo Bay Hotel, opened with the Magic Kingdom on October 1, 1971.

In preparation for the future sale, Disney incorporated a condominium association for the property on January 9, 1997, that would manage the units.[4] The project was officially unveiled on September 16, 2008.[5] Timeshares began on September 28, 2008, for existing Disney Vacation Club members and on October 5, 2008, for new members. It is the second Disney Vacation Club resort built in the Magic Kingdom Resort Area, following The Villas at Disney's Wilderness Lodge, which opened in 2000. Sales for the BLT started at $112 per point. The resort was considered “sold out” in the fall of 2011. Final direct sales prices were at $165. The current direct price at this recording is $245.

While reviews for the hotel itself have been generally positive, the architecture of the building has been criticized by many. Due to its large scale, critics have called it a significant overshadowing of the iconic A-frame tower. Others have called it “sadly conventional,” and the disappointing last work of architect Charles Gwathmey, who coincidentally died one day before Bay Lake Tower was to open to the public.

The original studio layout did not have a sink in the bathroom; you had to go into the kitchenette (where there were two sinks) to wash your hands. Most were remodeled by 2011. As of 2018, a couple still never got the renovation (it may have something to do with ADA compliance).

Annual dues per point for 2022 at this recording are $7.08. That’s one of the lowest, and it also rents very high, making it a good home resort to own if you rent points occasionally.  For resort refurbishment, the last full refurb was in 2021. The following soft goods refurb is scheduled for 2028.