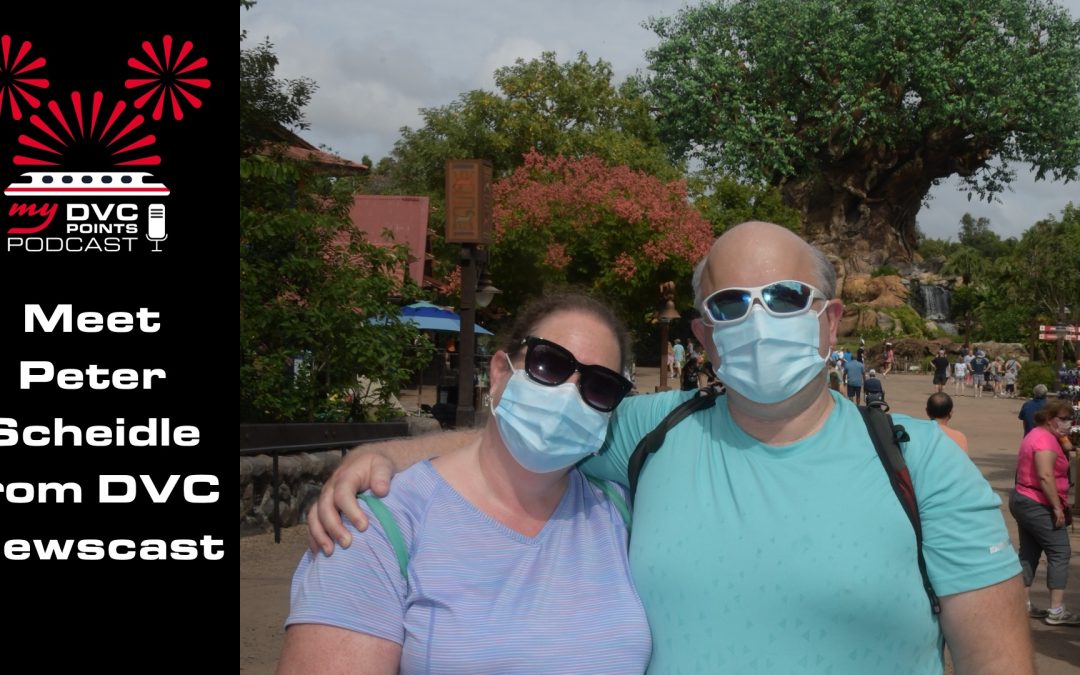 We're talking with Peter Scheidle, a servant leader within the DVC community. Pete Scheidle is a founding team member of DVC Newscast by My DVC Points. Pete also runs DVChelp.com, one of the most valuable resources for Disney Vacation Club members. Check out his website for DVC room availability charts, floor plans, and more. Episode 218

Pete's DVC backstory is long and winding, beginning as a small child when his grandmother would take him to Disney World. He visited Walt Disney World for the first time in 1972 when the pavement was so hot he thought it melted his shoes. A variety of family members continued to take him until 1982. Still, he had a large number of visits until his wife wanted to visit Walt Disney World in 1997 and again in 2000. Pete and his wife started going nearly every year. They realized they wanted to visit Disney World annually, especially after having a child.

Pete is an expert on Disney's Animal Kingdom Villas, but he appreciates moving around the Disney Vacation Club system. He often moves around his reservations at 7 months and takes advantage of the waitlist process. Pro Tip: waitlist shorter blocks of time of 3 or 4 nights at a time rather than a week or longer at a time. He has not yet stayed at Disney's Riviera Resort, Disney's Bay Lake Tower, Disney's Wilderness Lodge Copper Creek Villas, or Disney's Old Key West Resort. He's also still waiting to get to Disney's Aulani Resort and Spa and Disney's Hilton Head Resort. DVC's Copper Creek Villas is the most challenging Walt Disney World Disney Vacation Club property to grab at the 11th-month mark.

Disney's Villas at the Grand Californian have been great for Pete's family. Still, as a non-owner, the waitlists have come through later. He's looking to purchase less than 100 points at the Disneyland Tower so his family can visit Disneyland on DVC points every few years. He's looking to take advantage of the banking and borrowing process to give him a beautiful west coast Disney vacation.

Topping things on Pete's Disney Vacation Club bucket list sits Disney's Aulani Resort and Spa. Pete's 25th wedding anniversary is coming soon, which may mean making that trip. At Walt Disney World, Pete dreams of staying at a DVC grand villa at the Villas at the Grand Floridian and at Disney's Boardwalk Villas. One day, Pete might stay at the DVC Copper Creek Cabins, but it's not as high on his Disney Vacation Club to-do list.

Most of Pete's Disney Vacation Club's points were purchased as resale, and he believes in the savings of what he can get for his money on the resale market. Although Pete hasn't had the chance to stay at Disney's Riviera Resort yet because most of his points are DVC resale, he has no regrets. Pete saved 30%-40% off his total Disney Vacation Club purchase price by buying most DVC resale points. To maximize his DVC points, Pete tends to avoid holiday travel times and generally looks to stretch his DVC points rather than splurge them. Since joining Disney Vacation Club, Pete and his family have transformed from a rope-drop family to an attitude of relaxation at the parks. He always knows he's coming back with DVC.

As this episode wraps up, learn Pete's responses to our regular Disney rapid-fire questions, including his favorite treats, Disney attractions, Disney Park, etc.

Finally, if you've never checked out the myDVCPoints DVC Newscast, subscribe to the DVC Newscast to hear from Pete almost every week. Pete, Shannon Ford, and other DVC personalities cover Disney Vacation Club-centric news and other related Disney news. It's a great show that you can add to your weekly podcast rotation.