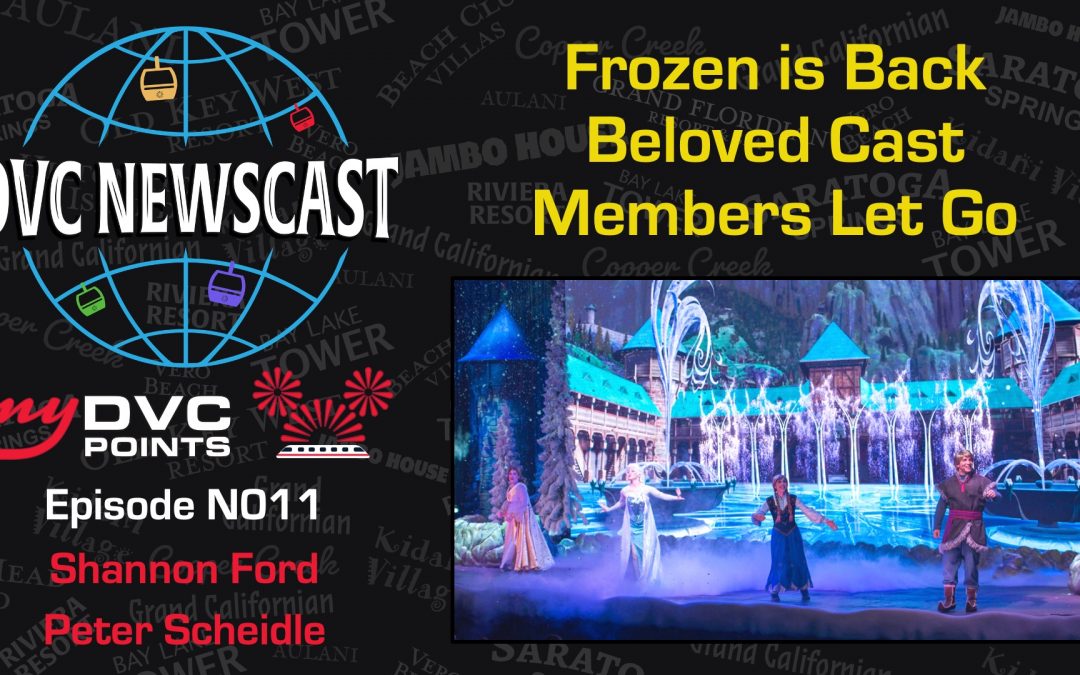 Shannon and Pete cover an emotionally difficult episode. We're saying good-bye to many beloved cast members and yet some of them are coming back to work. Frozen Ever After and Aulani re-opens. Recreation cast members are brought back to work.

DVC Newscast by My DVC Points Podcast was made possible through financial support from the DVC Dream Team:

In light of the prolonged impact of COVID-19 on our business, including limited capacity due to physical distancing requirements and the continued uncertainty regarding the duration of the pandemic – exacerbated in California by the State’s unwillingness to lift restrictions that would allow Disneyland to reopen – we have made the very difficult decision to begin the process of reducing our workforce at our Parks, Experiences and Products segment at all levels, having kept non-working Cast Members on furlough since April, while paying healthcare benefits. Approximately 28,000 domestic employees will be affected, of which about 67% are part-time. We are talking with impacted employees as well as to the unions on next steps for union-represented Cast Members.

Over the past several months, we’ve been forced to make a number of necessary adjustments to our business, and as difficult as this decision is today, we believe that the steps we are taking will enable us to emerge a more effective and efficient operation when we return to normal. Our Cast Members have always been key to our success, playing a valued and important role in delivering a world-class experience, and we look forward to providing opportunities where we can for them to return.

An email was sent to all cast members shortly before the statement was released to the press.

Who has been affected so far?

Select recreation has returned to Walt Disney World already, but this will reopen a host of other activities, like boat rentals at resorts. Many of these will likely be reinstated with new health and safety protocols. We also know that fishing is one of the activities that will be returning to the resort.

Guests can choose from 2-hour and 4-hour excursions and may possibly be able to add an extra hour in-person depending on availability. Guests can call 407-WDW-BASS (939-2277) to book an excursion.

“For the First Time in Forever: A Frozen Sing-Along Celebration” Returning to Disney’s Hollywood Studios on October 5

From the Disney Parks Blog:

Beginning Monday, October 5, you can once again join Erik and Aria, the Royal Historians of Arendelle, for their comedic retelling of the unique story of their kingdom, filled with delightful, sing-along moments from Disney’s “Frozen” and special appearances by Anna, Elsa and Kristoff. “For the First Time in Forever: A Frozen Sing-Along Celebration” will be the same incredible show guests have loved for the past six years, with some adjustments to staging and audience seating to allow for appropriate physical distancing.

Senior Vice President of DVC Terri Schultz has confirmed that Aulani, Disney Vacation Club Villas will begin a phased reopening effective November 1. This move will leave the Villas at Disney's Grand Californian Hotel & Spa as the only DVC resort still closed due to the impact of COVID-19.

DVC warns that all arriving guests are subject to state and local restrictions. Guidelines going into effect on October 15 require those visiting Hawaii to either have a negative COVID test within 72 hours prior to arrival or to quarantine for 14 days. These rules are subject to change at any time.

Guests should expect modifications to food, beverage and recreation programs at Aulani. Disney has not offered any specifics regarding these operational changes.

My DVC Points is an awesome community of DVC members. Our positive, respectful, and authentic conversations about Disney Vacation Club designed to help people make informed and educated decisions about what's best for their families. Our content focuses on a Disney Vacation Member lifestyle. We cover everything from buying, selling, renting, picking your next resort or Disney restaurant. Our conversations start on the My DVC Points Podcast and DVC Newscast and continue on our Facebook Group and our live shows multi-streamed to Facebook and YouTube. Please down our smartphone app. Play Trivia with us every Friday night at 9 PM Eastern at Mouse Quiz!

It takes an awesome community of DVC members to produce our content. We're always recruiting people to help research, produce, edit, or join our shows to share their stories. We've had over 200 DVC members on our podcasts and live shows. Please consider supporting our show through our VIP Producer's Club at Patreon.com.