The Worst Grand Villas in DVC 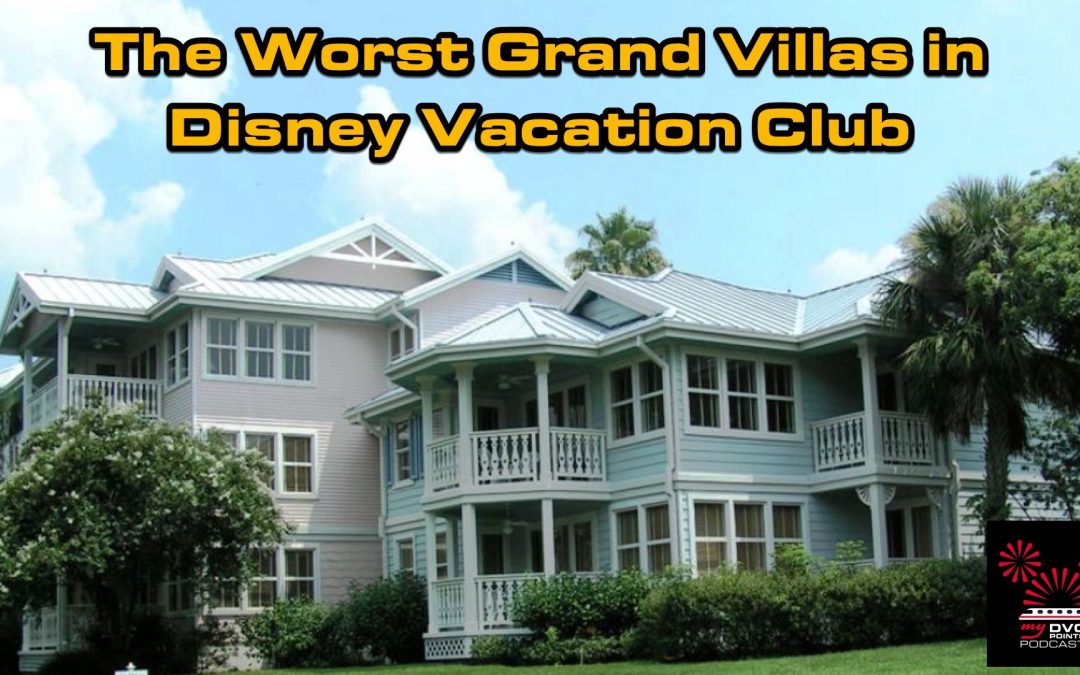 My DVC Points
The Worst Grand Villas in DVC

Let’s keep the bougie going this week as we tackle Disney Vacation Club’s worst Grand Villas. When we say worst, we mean we’re going to be a bit nit-picky. Is there such a thing as a “bad” DVC Grand Villa? Probably not, but there might be some DVC Grand Villas that might not be your style or might not just be your personal favorite. Episode 227

Let’s keep the bougie going this week as we tackle Disney Vacation Club’s worst Grand Villas. When we say worst, we really mean we’re going to be a bit nit-picky. Is there such a thing as a “bad” DVC Grand Villa? Probably not, but there might be some DVC Grand Villas that just might not be your style or might not just be your personal favorite.

For example, the DVC Grand Villa Disney's BoardWalk Villas might seem like a strange layout with odd decor to some. Even though each of these DVC Grand Villas have great views and all sit on one level, it can feel like these might need refurbishment soon. The kitchen is a bit small and it’s in the corner. The whole DVC Grand Villa has some odd angles within the layout, but the Boardwalk Views might save this one.

Moving across Walt Disney World property, the lake view DVC Grand Villas at Bay Lake Tower at Disney's Contemporary Resort might not be for you. While the theme park views are spectacular, these are all two-story DVC Grand Villas. If we’re spending DVC Grand Villa points, those one-level locations are higher on our priority list. The Lake View rooms are peaceful and come with a 50/50 shot of getting the Magic Kingdom on one side. However, if you have little ones, you might spend your vacation worried about your kiddos and the stairways. These are a lot of points, and the decor doesn’t spark joy for everyone.

Heading over to the Disney Springs area, the DVC Grand Villas at Disney’s Old Key West Resort leave something to be desired on the second floor. The beds aren’t full queen beds, they’re double beds even though the room can accommodate larger beds. If you’re sleeping 2 in those beds, they’re going to be a bit of a squeeze. These are huge villas, but they begin on the second floor and go to the third floor. Plan to climb a lot of stairs to get to these. One of Disney’s Old Key West Resort’s downfalls is that only a small handful of buildings have an elevator, so if you have anyone in your party who will have a difficult time with stairs, these DVC Grand Villas are ones to skip. They’re grand in size only, and lake that Disney pizzazz that we all seek in a DVC Grand Villa.

While the DVC Grand Villas at Disney's Animal Kingdom Villas – Jambo House made our best-of list, their counterparts at  Disney's Animal Kingdom Villas – Kidani Village land here on our worst-of list. Another 2-story DVC Grand Villa, everyone is a bit separated in this space. If you’re looking to get everyone together, this space is difficult for gathering. It’s like a double-layer apartment and the kitchen table doesn’t seat everyone who might stay in the DVC Grand Villa here. The standard view rooms don’t grab a great view of the savanna and the savanna view rooms don’t allow everyone to see the animals together because of the separated balconies. Even the theming leaves something to desire.

Disney's Hilton Head Island Resort has a DVC Grand Villa that starts on the third floor of the resort with no elevator access. Another two-story DVC Grand Villa, be ready to trek up the stairs like you would at Disney’s Old Key West Resort. Nothing much else to say about it because the high floor location really hinders this one.

If you’re a balcony family, we suggest you avoid Disney's Saratoga Springs Resort & Spa because it has just one tiny one. The resort itself is beautiful, but we just don’t find the points worth it. The views aren’t great, and we just think there are many other amazing DVC Grand Villas out there for your points. It’s nice, but lacks the sparkle we want in our Disney vacations.

But the worst of the worst – it’s Disney's Beach Club Villas’ DVC Grand Villas … because they don’t exist! These rooms never came to fruition, and boy do we wish they would have. Only in our dreams.>